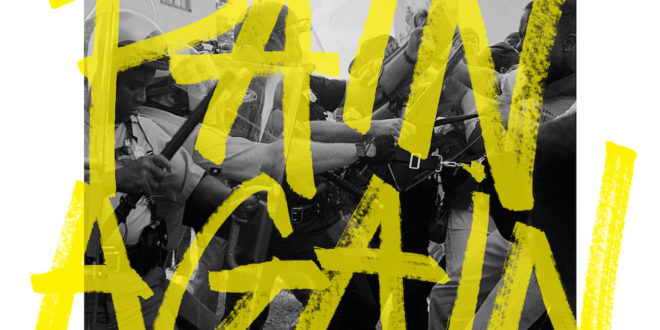 Varials is up-and-coming metalcore’s divine quintet, proving to be one of Fearless Records’ heaviest bands with their brutal nature and cynical lyricism. Reigning from Philadelphia, vocalist Travis Tabron, guitarist Mitchell Rogers, guitarist James Hohenwarter, drummer Sean Rauchut, and bassist Mike Foley have joined forces on their Fearless debut album Pain Again. Their prior 2016 release Absolution EP made waves in the metal scene, gaining recognition from Alternative Press, Revolver, and more. Varials set themselves apart with their “calm before the storm” essence, a repeated pattern of filling the white noise closing their abrupt anthems with calming melodies, only to blast back. Not only that, the variety of experiment in their compositions all while delivering their strength of character is their specialty. Themes of distrust, freedom, and tenacity match the punishing melodies and fits of rage. Varials isn’t afraid to call it how they see it and aren’t going down without a fight.

“New Damnation” takes off feeling like you’ve stepped into a circus of darkness, as vocalist Tabron says “Step on up, sir.” The track slowly creeps in as Varials find their rhythm and energy. “Every night is a new circle / Every day is the same.” The rapid fire drums and gritty bass set the tone for the album as the fury begins. “Anything to Numb” is the first single off the record, pulsing its way across media channels with nearly 100K views. The suspenseful build in the beginning sets the dark, doomful undertone while grooving to the nice, steady rhythm. The lighter background guitar creates a dream-like effect as the feelings of despair cry out “anything to kill your ghost.”

There are a few numbers on this track-list that are undeniably catchy. “E.D.A” (which stands for everyone dies alone, in case you were wondering) provides substance, especially for being the shortest track on the album. The balance between the sweeter, broken down tones and the revving of the engine full blast is phenomenal. “Am I so naive that I can’t see my faults / but I will point out every one of yours.” Though there’s evidence of a hip hop influence in the rhythm, Rauchut’s crashing cymbals are the highlight of this headbanger that will leave a pain in your chest.

Another favorite is “Abacus,” an uplifting track diving in the depths of going after your dreams, having hope, and giving everything you’ve got. “Would you have the power to lay it all on the line / leave it all on the floor / and go break a leg.” There’s a different tone about this track than the rest of the album. There’s a sense of eeriness as the song begins with an over distorted guitar intro, followed by hollow and echoing vocals. I wouldn’t say this is your traditional metal song, but it’s oddly empowering nonetheless. “There’s something special in your mindset that sets you apart / there’s something colorful inside / You speak of peace and the future like you’ve been there before.”

When listening to tracks, I try to imagine how it would be performed live, as well as picking apart the studio version. I can already hear a crowd clapping along to anthem “Deliverance” before breaking into a metal dance-fest. This track is the gravy to the mashed potatoes, highlighting the album with exceptional substance as the band chants “Show me deliverance.” The song is upbeat and will make you want to get off your feet.

Overall, Varials delivered a tremendous debut record full of their sheer anger and open wounds. Despite their aggressiveness, the piece is delightful and there’s no doubt they will make an impact on the revival of metal. You can catch Varials on their summer tour in the US, dates can be found here.

Kitchen Designer by day, Concert Photographer/Writer by night. 24. Arkansas.
@tsheaphoto
Previous The Art in The Rap: Savan DePaul’s “5.0.1.” and the Sketchpad Project
Next Gallery: Switchfoot at The Stone Pony Summerstage in Asbury Park, NJ 08.10.17