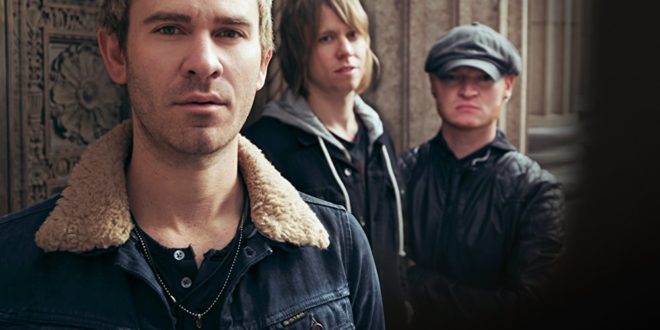 Lifehouse have held a strong footing amidst the variable success of current mainstream rock. The band is best known for their accessible blend of post-grunge and pop, which defines such classics as “Hanging by A Moment,” “Spin,” and “You And Me,” along with modern gems “All In” and “Hurricane.” 17 years since their commercial debut, Lifehouse’s present incarnation is a three-piece comprising vocalist/guitarist Jason Wade, bassist Bryce Soderberg, and drummer Ricky Woolstenhulme, Jr. Their latest release is an 18-track Greatest Hits compilation, which spans No Name Face to Out of the Wasteland. To date, the band has sold over 15 million albums worldwide.

Currently, the band has an upcoming show at the Stone Pony Summerstage in Asbury Park, New Jersey, as part of a 30-city tour with Switchfoot titled Looking For Summer. In preparation, I initially caught up with Bryce, and then Jason (who joined us shortly thereafter), to touch upon the tour, their fondness for the venue and Asbury Park, pre-Lifehouse anecdotes, and the endurance of the band’s legacy.

ME: To start off, tell me about the Looking For Summer tour. How’s that been going for you guys?

Bryce: It’s amazing! We’ve been away from touring on a bus in the United States for the last six years. To come out and be in the chapter that we’re at in our careers, and be with guys like Switchfoot, who are an amazing band and even better dudes, it’s great chemistry for a tour. I think both fan bases are gelling together, and everyone’s having a great time.

ME: With your show at the Stone Pony Summerstage coming up on the 10th, what resonates with you about the venue, as well as Asbury Park in general?

Bryce: The Stone Pony is such a legendary venue. We’re always excited to come to Asbury Park and play there. There’s so much history with Bruce [Springsteen] and Bon Jovi. The lineage is so cool, and the crowds are always very receptive to us. The town itself is so interesting. There’s a hotel we like to stay at that’s haunted. It’s always fascinating to come down here, you know? This is a stepping stone for every band’s career. It’s so well known and just a fun spot.

ME: I understand that before Lifehouse, you were with a number of different bands. Did you initially hone your chops playing with AM Radio?

Bryce: I’d had a bunch of high school bands back then, but yeah, my first professional band with a record deal was AM Radio. We were managed by Rivers Cuomo from Weezer. That gig actually led to the guys in Lifehouse giving me a call. The story was that they saw me on stage with a Rickenbacker bass and said that I looked cooler than some other dudes they were looking at – just because I had the bass. So, I owe it to the instrument. One thing led to another and we’ve had this core lineup as a band since 2004. It’s been a blast ever since!

ME: That call was initiated by Sean [Woolstenhulme] from The Calling, right?

Jason: I’m just joining you guys now. Yeah, Sean was with us for a couple of years, and he was the one who told us about Bryce. I was in East End doing the [self-titled album] with Ricky, and we saw a picture of Bryce and thought he looked really cool with his Rickenbacker bass. After we did the album, we just hit it off right away. We jammed a little bit, and the rest is history.

ME: Hey, Jason. Before the band was called Lifehouse, you were called Blyss, and had completed your first album in 1999, Diff’s Lucky Day. What sparked the transition into Lifehouse?

Jason: We didn’t have a choice, to be honest. The name Blyss was taken by an electronic act from Sweden. Our first album was in the can but we couldn’t release it under that name. We were just throwing a bunch of names into a hat basically, since all the ones that we’d thought of using had been taken. Lifehouse was one we weren’t crazy about, but we were actually able to copyright it. Funny enough, we find out that Pete Townshend also had a project called Lifehouse that we weren’t aware of, but he didn’t copyright it. So, we kind of stole the name from Pete Townshend (laughs).

ME: Nice. Any chance of Pete contacting you about it at this point?

ME: Well, here you are, eight albums later, still at the top.

Jason: Yeah, man. 17 years. Never in our wildest dreams did we think we’d still be doing this, but we’ve been very fortunate.

ME: I notice with your later stuff, you’ve definitely expanded. In Smoke and Mirrors, for instance, Bryce starts singing lead. Has Lifehouse been more collaborative this time around?

Bryce: Yeah. For me, I think joining a project with an established foundation and carrying it on has been a very interesting and fun role to fill. I’m a middle child in my family, and it’s a similar experience in the band going through these peaks and valleys, ups and downs. Performing is very much something that has been ingrained within me, and I have free rein for creative input with songs and shows. To have a few songs that we closely collaborate on has been a blast, you know?

Lifehouse started as something that has foundationally been Jason’s baby. He’s written the lyrics and sang the songs; it’s a formula that has worked. Now, we just try to take the ball and run with it in the best way we possibly can, so that we can create the art that we want, and our fans can be a part of that journey with us.

ME: One thing about you that still resonates with me is that you helped rock music maintain a strong presence at a time when pop was dominant, and still to this day. I remember seeing award candidates through the years though, and rock bands are rarely nominated, let alone acknowledged. What are your thoughts about rock as it is now?

Jason: It’s all cyclical to be honest, man. It’ll probably come back in the next couple of years. I know that the EDM and pop thing had gotten so huge, but we still have great rock bands out there. Foo Fighters and bands like that are still holding the fort down. But everything kind of goes in circles; it’ll come back around.

ME: I hope so too, and I appreciate your confidence and persistence. Speaking of that – from album to album, it seems you haven’t compromised. Your signature sound has stayed intact.

Jason: Thanks, man. Yeah, we always try to look at every record as its own entity. We didn’t want to just do the same thing over and over. I’m kind of proud of the fact that we’ve never done really bad, cheesy pop stuff, or ventured too far outside of our zone, but still try to grow and evolve. I don’t think that there are any songs we’re really embarrassed about.

ME: I’ve heard your solo stuff too, and saw you put out “My Universe” recently. Is this music more or less an extension of Lifehouse, or just your own thing?

Jason: These are songs that have never really found a home on a Lifehouse record; about 40 or 50 had just been sitting in Dropbox, so I just wanted to share them with the fans. I’m not promoting them or anything, just putting them up on my website and on Spotify. When you record something, it’s good to have a nice outlet to release it onto.

ME: Ironworks is the label you’re currently on for both projects. Can you tell me a bit about that?

Jason: Ironworks is Jude [Cole]’s label, but we’re all involved in it. We just needed to put all this music under one umbrella. With Jude, we don’t even have a contract with them – they’re like family, you know? It’s just an extension of family, basically.

ME: Even though this was a while ago, your last album, Out of the Wasteland, had you expanding the scope of your sound in a way. It’s still with your identity, but you take your time to explore and emphasize different backing textures. I thought that was a good capping point.

Bryce: Yeah, thank you! Especially with these last few albums we’ve been making, we haven’t tried to ‘chase the dragon’, so to speak, with what’s going on in pop radio, or tried to keep up in a way that sounds forced, or just unlike us. We’ve always tried to push the envelope of creativity, but do it in our own way. We’ve released our greatest hits, but that’s not the end of our legacy. We get to keep this going and enjoy making art.

ME: With your greatest hits, did you decide on the sequencing of the tracks, and which ones you wanted to ultimately represent the band’s legacy?

Jason: Yeah, we’d aimed to take the temperature and pulse of our fans, and what they’d want on a greatest hits record. All our singles are on there, but there’re also three non-album singles that are fan favorites – “Everything,” “It Is What It Is,” and “From Where You Are.” We felt those rounded everything out.

ME: That’s awesome. Lastly, anything you’d like to say to your fans?

Bryce: We’re having a blast on this tour! It’s magic every night for us with both bands. Come to Asbury Park if that’s close to where you are, because we’ll be out and about. We’re proud of our greatest hits, and we’re excited and grateful to be in this chapter of our career.

I come from a family who is passionate about all things music. I learned to sing at an early age, and by 13, had my very own Fender Strat guitar. I tried my hardest at learning all that I could. Because I was born with cerebral palsy, I had to teach myself an adaptive playing style. I learned to write and record my own music, despite these difficulties. In college, I started making great use of my writing abilities by reviewing music, as well as copy editing. I guess it's best to stick with what you know, while welcoming a fair challenge at the same time.
Previous Jessica Hannan Releases Official Music Video for “Girls Night Out”
Next Sleeptalk Release Music Video for Crisp New single “Bright Eyes”