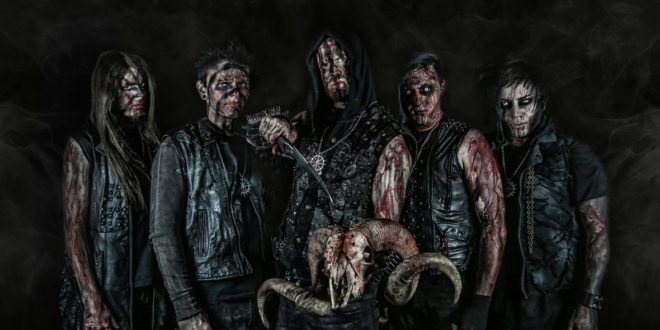 “Sed Nomini Tuo Da Gloriam” is the catalyst for our narrative arc within our album ‘Chaosborne.’ The song encompasses the legendary Battle of Montgisard during the 10th century Ayyubid-Crusader War. We wanted to bring the horrors of that battle to life with our story’s main character, Mathias, an idealistic Templar. Within the song, his worldview is shattered, as he is utterly unprepared for the ensuing madness upon the killing fields of Montgisard in addition to the true nature of his brothers among his knightly order. We also wanted to explore that darkness that lurks within mankind, what we call the “Shadow Self.” Director Matt Zane and I talked about how we wanted to bring these concepts to life, while showing the struggle of a Templar confronted with the consequences of the Crusades as he is tormented by the souls of the vanquished. Zane and the rest of the cast and crew were an absolute pleasure to work with. We couldn’t have been more pleased with the end product. We hope you enjoy the latest offering from our debut album, ‘Chaosborne.’ –Andrew Knudsen / Lead Vocals

Empyrean Throne is a Clandestine Order of chaos gnostic Black Metal practitioners, an endeavor stoked in the fires of inspiration and forged with the hammer of hard experience. While indisputably an American band, the initial spark was in fact ignited by two travelers in Scandinavia, from where it journeyed south and west to the sweltering heat of Lake Forest, California, where in 2011, the first manifestation of the band that would eventually become Empyrean Throne was founded.

Empyrean Throne’s very first recorded music took the form of the ravenous “Demonseed” EP in 2013, with a sound described by OC Weekly as “a vicious mix of raw black metal and traditional death metal” coupled with the haunting strains of a real, organic cello choir, signifying the birth of the band’s trademark approach to composition. With the spoils reaped from this first offering; coupled with favorable reviews from MetalBite.com, The Kosher Metal Blog, and MetalAssualt.com, the Order of Empyrean Throne was still hardly content to stand still, as still so much lay in wait on the road ahead.

In the years that followed, the members of the Order underwent various ordeals that tested their merit as artists and human beings. Grueling punishment, loss, facing one’s darkest fears, and even encounters with that which some may venture to call divine proved necessary to shape Empyrean Throne into what it was to become: a sonic conduit for Chaos. Indeed a gateway leading inwards and backwards, elevenfold, towards that great intangible place and power. Ave Magnum Chaos.

Empyrean Throne’s upcoming first full-length release, “Chaosborne”, is a testament to this new unfolding, lurching deeper into the infernal depths of Black Metal and higher unto the celestial realm of orchestral concert music. Telling the story of a hapless Templar knight in medieval Europe and his subsequent decent into the realm of Chaos, the album offers eleven solemn hymns to unbecoming, with the searing Black Flame of illumination and wrath burning brighter than ever before in the hearts of those who have crafted it, the members of the Order themselves.

Empyrean Throne have been privileged to fly their banners and leave their mark on the live front alongside many of the esteemed acts in extreme music, including Nile, Kataklysm, Aborted, Shining, and Cattle Decapitation, among others. The Order has also carved its sphere of influence from the sweat and grime of the road, with two west coast tours under their belts and an appearance at Central Oregon Metalfest in 2016. Apart from that and a smattering of singles, which include a vast rendition of the Behemoth classic “Ov Fire and the Void”, Empyrean Throne have been quite occupied indeed preparing the ground for “Chaosborne”, and for whatever may lie beyond…

INTO CHAOS. TOWARDS THE BEYOND. EVER VIGILANT.