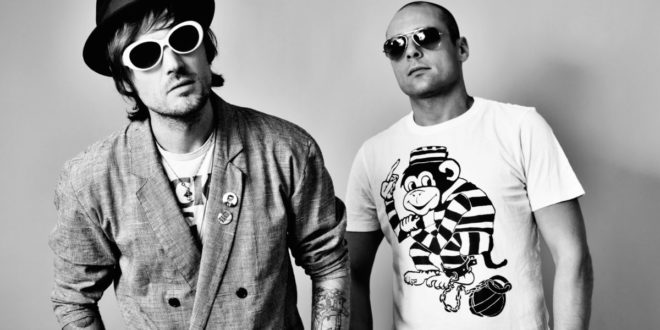 Album Review: The Dukes – Smoke Against the Beat

With their last LP dating all the way back to 2011, French duo The Dukes (Francois Maigret and Greg Jacks) have made a vigorous comeback with Smoke Against the Beat. While 2011’s Victory was an impressive and diverse debut, combining elements of electronic music and indie rock into their sound, The Dukes’ latest release offers a more raw approach to their rock and roll style.

The album begins with “Just in Case”, a catchy piece of garage rock with a bit of a southern tinge in the guitars. The performances are solid though it feels like a rather safe note to put at the forefront of the LP. Thankfully the energy immediately picks up with the title track. It draws comparisons to alternative rock/stoner rock heavyweights Queens of the Stone Age, particularly their work on Song for the Deaf and Rated R. The track is short and sweet, but carries a hefty helping of adrenaline. The vocals possess a raspiness that works well with the fuzzy guitars, creating somewhat of a dizzying effect. The flowing rhythm is absolutely incredible and gives the album the proper jolt it needs to get going. While on the subject of Queens of the Stone Age comparisons, the track “Alive” even features some Josh Homme-esque guitar work given its fast and fiery style. This lively tone is also present on “Black Hole Love” which features some vintage hard rock guitar work. The unhinged nature of this track shows off the band’s ferociousness. The instrumentals pack a serious punch and the vocals carry the truculent grit of a punk song. While these punk tendencies were briefly put in the limelight on Victory, they were a bit crude. For example, Victory’s closing track “Morphine” certainly had a punk structure but it seemed to take a more sophomoric approach, similar to something NOFX would write. Here, the punk influences are unrelenting. The shouted chorus on “The Tyrant” which screams “I can’t get no motivation!” is quite similar to the vocal style of Johnny Rotten. It’s a harsh sound that unleashes a level of audacity not found on The Dukes’ previous record.

The Dukes aren’t afraid to take slower approaches for other songs. Tracks like “Daisy’s Eyes,” “Gold Digger,” and “Don’t Die a Copy” have more blues rock vibes. These tracks feature alluring guitar riffs and rattling percussion, similar to The Black Keys. However, The Dukes get a bit more ambitious with their sound and expand upon the genre. The aforementioned “Daisey’s Eyes” features a lovely variety of details layered over the blues instrumentals, such as touches of keys and acoustic guitar. The track “Gold Digger”, which admittedly takes a more basic approach in its instrumental organization, features one of the catchiest moments on the album. When the leading riff combines with the rhythmic cymbals, the song falls into an infectious groove that is sure to stick with listeners.

The drawbacks to Smoke Against the Beat are fairly minuscule. The production, while not awful, could be better. The production occasionally muddles certain tracks, especially in terms of the percussion, and can occasionally make the album lack a clean sound. This especially hurts when the album incorporates a wide variety of instrumentals into some songs, as listeners might not be able to make out every detail. On top of this, the closing track “Genius” left a little to be desired.  While the classic rock style was enjoyable, this track felt a bit anticlimactic compared to the rest of the project. It’s not necessarily a bad track in its own right, though it lacks the same bite found on previously mentioned songs and it doesn’t cap off the album in as exciting fashion as one might expect given how energetic the rest of Smoke Against the Beat came across.

Smoke Against the Beat is an immensely fun listen. Whether you’re a fan of garage rock, indie rock, blues, alternative, or any variant of those genres, The Dukes offer it all on this album. Although their last full-length project came out seven years ago, The Dukes show no ring rust in their return. The Dukes have put together a fast, pounding assortment of tracks which is an improvement from their already impressive debut record.

Cain Miller is an aspiring writer who hopes to work his way up and gain notoriety for his material. Having written about film, television, music, and sports, Cain is always looking to gain as much experience as he can and continue to improve his writing abilities.
@cainemiller
Previous Rapper Just Light
Next Album Review: Umm – Double Worshipper