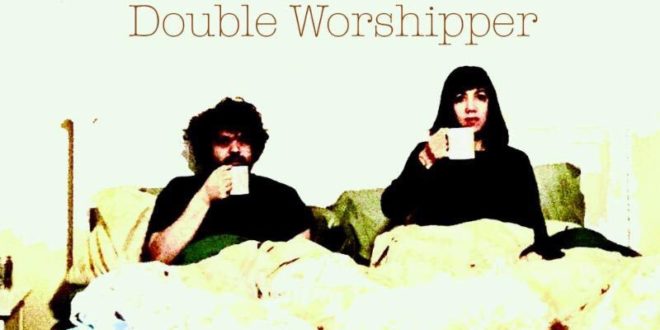 Double Worshipper is the debut album from the new LA-based band, Umm. This duo is composed of Stefanie Drootin and her husband, Chris Senseney, both not new to the music scene. Stef has been in past projects such as The Good Life, Bright Eyes, Big Harp, and She & Him, and Chris has been a part of Big Harp only. Putting their talent’s together, Umm articulates a simply vintage sound on Double Worshipper with intense guitar riffs and constant beats behind Stef and Chris’ delicate vocals.

The debut album starts with the song “Black Summer”, with a bit of irony in the track’s title. With a wrenching electric guitar plus a soft, light guitar starting the first seconds of the album, this first-impression correctly shows the vibe of Double Worshipper. Stef and Chris’ voices swiftly intermix and build off each other not only on this track, but the whole album. “Black Summer” ends on a high tension mood, with the electric guitar growing stronger towards the end. The song “I’m In Love” picks right back up on the high tension note seconds before, and becomes a constant throughout the whole song. With the chorus’ lyrics stating “I’m in love” placed on such an intense, hard electric guitar and beats shows the harsh contrast of both lyrical content and instrumentations that Umm was trying to give off.

The third track “Some Jungle” gives a punch of Mac Demarco vibes from the laid-back, soft guitar riffs and delicate vocals of Stef and Chris. The lyrics in this track are specifically something that stands out from the rest of the album, singing “Still just a mess of bones and blood”. Later in Double Worshipper, a tense, yet light sound is given with the track “Hunt Haunt”. Then unlike the other tracks, “Total Collapse Of The Sun” comes right in with a fast pace electric guitar riffs and strong drum beats that help bring in a vintage taste, reminding of an 80’s rock song.

The album ends off with tracks such as “Idiot Child” and “Oh Yes No” that both have a similar fuzzy throwback feel, which is seems to be a typical Umm sound on Double Worshipper. Stef and Chris both singing at the same time throughout this album is what majorly sticks out, as their voices inline perfectly and differentiates them from other bands like them. Double Worshipper expresses a mood that stays pretty constant throughout the record: feeling content and relaxed while drinking coffee in bed (hence the album’s cover).