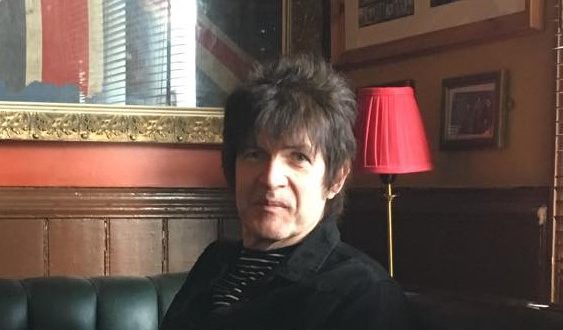 Edward Rogers’ career progression melds substantial poignancy with matching diligence. The Birmingham-bred Englishman initially honed his musical chops on drums, playing in various garage bands upon moving to New York City. However, a subway accident in 1985 left him without a right arm and right leg below the knee. This pushed Rogers to channel his abilities into songwriting which would ultimately prove a lasting and successful venture. What came of it was numerous projects, including more than a half-dozen critically acclaimed solo releases featuring veritably established personnel: Don Piper (Syd Straw), Jeff Blythe (Dexys Midnight Runners, Elvis Costello, Black 47) and Marty Wilson-Piper (The Church) are just a few of his collaborators.

With his seventh and latest solo album, TV Generation, Rogers makes the best use of his accumulated talents thus far. Just the titular track alone was enough to hook me in. One listen to the initial sparse, feedback-accented chatter, and I already know I’m in for something big. The subsequent combination of his sharp-witted vocal delivery, overdriven hooks, and grooving percussion brought to mind a slew of different rock eras – like 60s popsike, 70s punk, 80s new wave, and 90s britpop accumulated into a single song. From a thematic sense, I appreciated Rogers’ gleaning depth out of simple analogue fascinations, which fits sensibly within the song’s title. Next up, “20th Century Heroes” couldn’t be any more relevant. Its glam-era Bowie arrangement rings bittersweet, especially in the opening lines, “My childhood heroes fast fade away/I saw the news; another died today.” I’m reminded of last year, how it had quite possibly the most celebrity deaths including Bowie himself. While this song’s particular display of influences isn’t as forthright, the subtleties are what counts. That type of focus translates well on the third track, “No Words,” centering on a similar heartbreak but from more of a foreground perspective. The lush string-based accompaniment is a comfortable fit for the song, as they both elevate and highlight the nuances of Rogers’ unique vocal characteristics. “Gossips, Truths, n’ Lies” proceeds to expound on that sentiment, stripping a bit of the spectacle in favor of a heartland rock approach. Four songs in, and I’m made aware of not only the display of melodies on offer, but the attention to thematic detail. The chorus resonates as a strong moment of catchiness, but also a flowing and cohesive message of manipulation. “Wounded Conversation” is a bold effort in highlighting the aftermath of conflict, touching on moods such anxiety, depression and vulnerability. It’s an interesting contrast of darkness offsetting the otherwise soothing guitar melodies that makes this track stand out. By this point, the album highlights a series of broad—albeit well-constructed and far from vague—relationship vignettes. “Listen to Me” then serves as an answer track of sorts, written from both an internal and external point of view. After an assessment of questions to his emotions, the subject of the song is better equipped with a clear and open mind. His words are eloquently expressed in that they don’t come off as pleas from a place of rage, but as actions set to overcome deep emotional scars. The first side is capped by “Sturdy Man’s Shout.” With a bluesy, hooky riff set-up, this shift evokes a slight lift in mood, as if downing a stiff drink to boost one’s confidence. There are strong early 70s-era Rolling Stones inklings throughout, and it makes a wholly decent rocker of a checkpoint for the album.

“On This Wednesday in June” starts the second half of tracks on a note of greater instrumental progression. The clean section deconstructs a malevolent heart, touching on tinges of cowardice that envelop their anger. Once the initial phrase of the chorus “Love is stronger than hate” is sung atop overdriven guitars, the sentiment resonates much more deeply. As a result, the notion of boldness against deterring circumstance is enforced effectively once again. The tracks to follow, “Terry’s World” and “The Player,” both center on scenarios in which their subjects are clouded by their actions, and thus are overcome by loneliness. Whereas the first song portrays this mindset in a somber, finger-picking folk style, the latter is one of suave baroque pop. Toward the end of the album, a nostalgic leaning takes place, as if circling back to the pivotal moments of initially innocent times. “You and I” captures the importance of a significant other’s present in one’s life, maintaining an acoustic aesthetic and feeling a bit bittersweet in execution. The next moment takes that insight a step further in “Arthur Belle,” whereby the progression of time increases as the mind races through stimulating settings, and simultaneously acquires positive attributes, such as temerity, in the context of the song. I appreciate the Moody Blues feel that the guitars and harmonies provide, as well as how the acoustic/electric interplay accentuates the pace of the song. The tone returns to uplifting and overdriven for the album’s penultimate song, “She’s the One.” Its anthemic structure is complementary to the lyrical focus, of finding that special someone who shares similar flaws and circumstances while proving all the more desirable. The 14th and final track, “TV Remixxx2,” a reprise of the first, ends up a sufficient closer for the album, given its exhibiting the same key and stylistic elements. Its rhythm is played in reverse, so as to insinuate a continual cycle of every youth and an encapsulation of newfound growth.

Overall, TV Generation is Edward’s best effort to date. The pacing and sequencing of its tracks work especially well from a thematic standpoint, and its stylistic elements bring out only the best of his vocal abilities. The path he takes this time around is by no means singular. In fact, it traverses pertinently through equal parts innocence and maturation. I have yet to see another level of artistic potential be unlocked once future material solidifies.

I come from a family who is passionate about all things music. I learned to sing at an early age, and by 13, had my very own Fender Strat guitar. I tried my hardest at learning all that I could. Because I was born with cerebral palsy, I had to teach myself an adaptive playing style. I learned to write and record my own music, despite these difficulties. In college, I started making great use of my writing abilities by reviewing music, as well as copy editing. I guess it's best to stick with what you know, while welcoming a fair challenge at the same time.
Previous Album Review: Miranda Lee Richards — Existential Beast
Next WARDEN and SISTERWIFE Highlight the Worst in Late Night Infomercials!