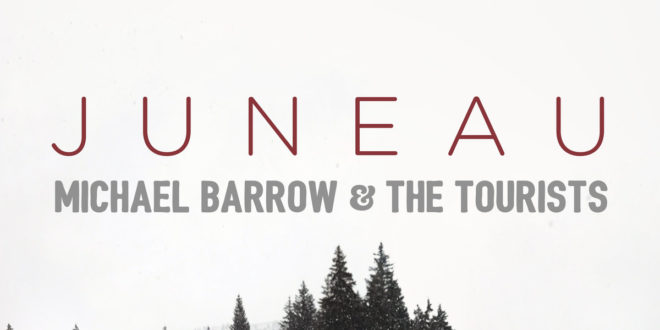 Michael Barrow & The Tourists album Juneau is an indie music lovers dream. With a low key cohesive sound that encompasses the entire LP, and the delicate stylings of lead singer Michael Barrow’s vocals, Juneau is one of those records that deserves attention.

“Hey Hey Hey” is the shortest tune on the album, but that doesn’t lessen the quality of the song. In fact, the band makes use of its time wisely and at just under three minutes it quickly solidifies itself as the best track on the LP. Easy listening music at its finest, the band shows off not only their musicianship but their ability to tell stories. The lyrics are haunting and poetic such as “your heart is a wild creature but time has clipped its wings,” and combined with the relaxed folk nature of the song it culminates in something entirely beautiful. Michael Barrow & The Tourists don’t need flashy bells and whistles to make an impact on listeners, and that is never more clear than on this particular track, especially on the chorus which is catchy but in an understated way.

Immediately following “Hey Hey Hey” is the ballad “Sad Song,” and it lives up to its name. The melancholy feeling kicks it right from the first line as Barrow sings “dear I’ve been running for years and I’m still at your door/but I don’t know what for.” His soothing vocals are smooth and soulful in a gentle way and by the time he croons “they say that love is kind but it has not been kind to me,” one can’t help but fall deep under Barrow’s spell. It feels like the perfect song that could accompany a mournful scene in a television show or a film, playing in the background, making an impact. But even without visuals Michael Barrow & The Tourists still make this song come alive and the long electric guitar solo at the end is worth the wait as it wails and screams on its own taking the place of Barrow’s vocals but equally dishing out the same kind of pain. It’s one of those songs that you will want to crank up on a rainy day and just let yourself get carried away by the music.

“Turning to Gold,” is a midtempo track with a bit more of an uplift in the melody. “We’re living and learning and loving and turning to gold,” Barrow sings, a phrase that gets slightly changed as the tune progresses and the word play is much welcomed. The sound here is a bit more full with a driving and thriving percussion that creates a sense of power and urgency that suits the tune well. It feels fresh and with wistful lyrics it is sweet in terms of both the words and the instrumental elements. Barrow is at his best here vocally, especially on the chorus where he really soars and displays a bit more of a mainstream sound. Clearly it is a standout on the album, and for anyone who likes indie music it is certainly a treat to the ears.

The only downsides to the album is that some of the songs drag on for a bit too long, and that one needs a few listens to the album before they can truly separate and appreciate each tune because they all flow so well into each other. But it is clear that Michael Barrow & The Tourists have found a sound that works for them. And it’s pretty magical.