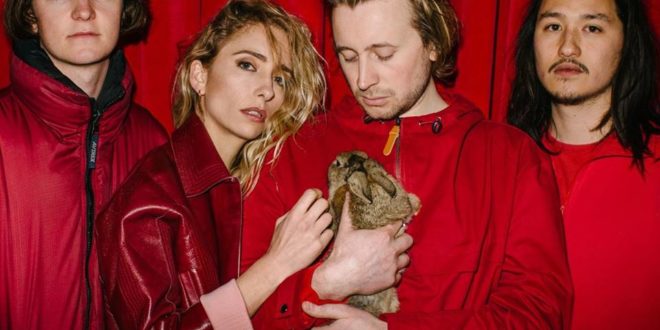 Pumarosa’s debut album The Witch is an explosive introduction to the band. With frontwoman Isabel at the helm, the album screams alternative and drips with a mood that will certainly satisfy listeners.

“Honey” has an electronic base and allows Isabel’s voice to really shine, nuanced and unlike anything mainstream alternative radio stations have heard in a while. It’s a bit of a throwback to female singers of the 90s who belted their hearts out with standout vocals that were unique and haunting. The song is upbeat and features lyrics such as “you tell me stories of good and evil,” which showcase that Pumarosa are willing to go beyond typical storytelling and delve into different worlds. The lengthy instrumental break is a treat to hear and compliments the rest of the tune and though this could have been a hit in the 90s if it was released then, it still holds plenty of potential in 2017.

Another excellent moment on the album is “My Gruesome Loving Friend.” Once again it is set against a digital landscape, a bit futuristic, but as always Pumarosa makes it work almost as their signature sound. Isabel performs with a strong conviction that is almost impossible to turn away from and that is a very huge part of what makes Pumarosa work. Listeners will be hanging on to every note and every lyric such as “you inspire wildness in everyone you see. That includes my love. That includes me.” As Isabel urges “Don’t throw it away” one can’t help but be drawn in by the tale she is weaving and coupled with an echoed effect throughout it makes the track one you will want to listen over and over again.

“Barefoot” is unlike any other track on the album. Isabel is completely vulnerable here, “after the argument there was very little to say,” she sings. And with a guitar and strings as the main instrumentation at first, and an ethereal vocal performance that feels like a banshee sitting next to you telling you her story, it is downright compelling and thoroughly spellbinding. Isabel’s falsetto is magic to the ears and this stripped down version of Pumarosa wears very well on the band. As the song grows the tempo becomes more upbeat and settles into an instrumentation that is more typical from the band but they pull off the transition smoothly and the whole package is like waking up to the best Christmas present.

There are a few downsides to the album, such as the fact that many songs are very lengthy and drag. The title track “Witch” doesn’t have much of a melody, “Snake” is experimental but a bit lackluster, and at over seven minutes long “Priestess” loses any magic it has created.

Still it is a consistent debut and worth a listen to.