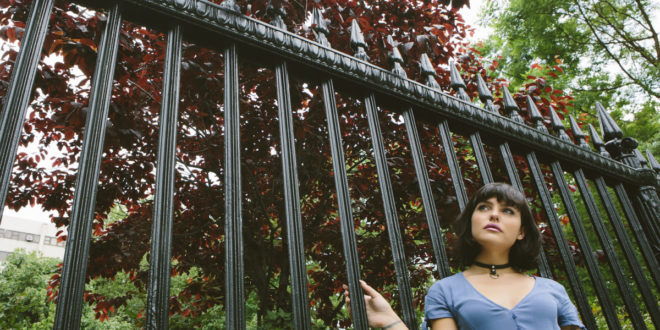 New York City based musician Fiona Silver has a new album Little Thunder which evokes the sounds of the 60s. She has toured with such artists as Shakey Graves and Breedlove and has earned praise from media outlets like NPR All Things Considered. I recently got the chance to talk with Silver about touring, and the process of making her album, among other topics.

1. Does being based in NYC influence your music?
Yeah, I think everyone’s environment affects them. The funny thing is a lot of bands are based in NYC… but I grew up here, so I think I have a different relationship to the city and the way it has helped shape me as a person and my music. I was just born in the thick of it, and grew up fast and was exposed to a lot from a young age. That has led me to be both open-minded and strong-willed about what I want creatively.

2. What is it about the 60s era of music that speaks to you?
There was a psychic change that occurred in the 60’s throughout America. People began to allow themselves, and each other, to be more free. There was so much passion and previously uncharted territory in rock n roll and soul music that came alive through bands like Led Zeppelin, Quicksilver Messenger Service, Jimi Hendrix, James Brown, Aretha Franklin and Marvin Gaye (amongst many others). I’m drawn to that desire for something new and raw.

3. You’ve shared the stage with musicians such as Shakey Graves. What is the biggest lesson you have learned from other acts?
I played a show with Shakey Graves years ago down in Austin Texas, before he had really released any music. We both played solo that night, and he sat on a suitcase he turned into a kick drum. I was mesmerized by his songs and his voice. What I learned was that no matter what, you have to do it alone. I have band mates that I love dearly, they make playing a thousand times more fun and the songs so much better, but at the end of the day you have to be your own boss, you have to make your own path, you have to keep growing and learning from your experiences, and you have to be in it 100% because it’s what your soul needs. No one gets any guarantees, people don’t just hand you things, you gotta work for it.

4. What was the writing and recording process like for Little Thunder?
It was organic and it took some time. I had started and stopped the process a few times over the years, but finally once I had gone through enough in life, written the songs that needed to come out and developed my ear it all came together. A huge part of that was having great musicians to work with, but maybe even bigger than that was finding my co-producer Erin Tonkon. She’s an amazing audio engineer and she really understood the music and worked with me flawlessly to bring out the best sound. A lot of producers want to put their signature stamp all over things and she has a zen way about her, no ego. It was such a breath of fresh air.

5. Who came up with the concept for the “Take Me Down” video? It’s really cool.
I did, thanks!
​
6. What was your experience like filming the video?
It was really fun! Definitely the easiest most chill video I’ve ever made. A lot of that had to do with Max Skaff who directed, shot and edited the video. He’s a total pro, works really quickly which is awesome, and we just laugh and have fun on set. Everyone in the video is a friend of mine. We shot at Jack Douglas Music Hall at the Institute of Audio Research for the band scene, and then the bar scene at The Metropolitan- a well-known gay bar in Brooklyn I used to sneak into when I was younger.

7. You were on tour with The Bottom Dollars. What has that been like for you?
It’s been amazing! I love being on the road, being in a different city almost every day and playing all the time. We had a lot of fun too. We stopped in New Orleans for Jazzfest and saw Stevie Wonder play!

8. What do you like most about live shows?
I just love to play music, and to perform. The connection between the audience and us on stage is what it’s all about. Sometimes you have to fight for it. Being on tour is good for that because sometimes you’re playing to all new people and it’s a fun challenge to win them over and give it all you’ve got.

9. What has been your favorite album of the year thus far?
Is it wrong to say mine?

10. What do you hope fans take away from your album?
I hope they will feel connected to the music and the messages in the songs. There’s a lot of raw emotion and brutal honesty in there and I hope that makes people feel like they’re not alone, and empowered.