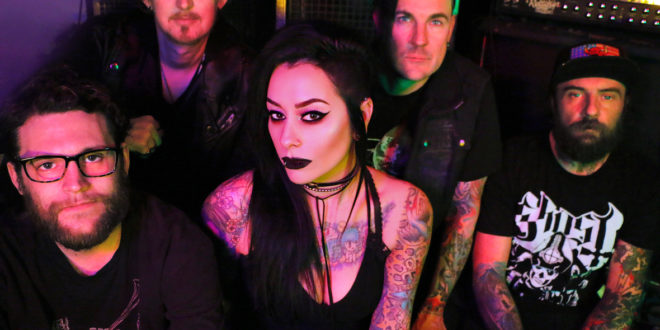 Lola Black Release Music Video for “Dead to Me”

Denver, Colorado based Hard Rock band Lola Black have released the teaser for their upcoming full length album, an Official Music Video for their Bob Marlette produced, new single, “Dead To Me”. With footage from Higher Elevation Rock Festival and KBPI Car Show last summer, the “Dead to Me” video was produced by Negative4 Productions. The band will also be re-releasing their EP Till Death Do Us Part via The Label Group on the same day as “Dead To Me,” May 5th, on iTunes and all other online retailers.

Lola Black will be performing at Rock Into Spring Festival on April 30th at M Resort Spa and Casino in Las Vegas, NV, click HERE for tickets and upcoming shows.

Hailing from Denver Colorado Lola Black has kicked and clawed her way to the forefront of female fronted Hard Rock acts and is poised for world domination. She and her eponymous group of rock and roll madmen have decimated their hometown of Denver taking in pretty much every award they have been up for including 3 Westword Music Awards landing them in alumni status, 106.7 KBPI’s Best Band in Denver and CBS Denver Top 5 break out acts. Lola Black has performed at Denver’s largest venue’s including The Pepsi Center, Fillmore Auditorium, Fiddler’s Green Amphitheater and The First Bank Center.

In 2012 the band released their first EP Dia de Los Borracho’s produced by Andrew Berlin from the Blasting Room (Rise Against, Teenage Bottle Rocket) that spawned the single “Borracho” which got added into regular rotation on 106.7 KBPI and climbed all the way up to #4 on KBPI’s play list.

2014 Lola put out “Till Death do us Part” with veteran producer Sid Riggs (Seether, John 5, Juliette and the Licks) while touring regionally as well as gaining a sponsorship from Jagermeister which would propel them to national stages on the biggest festivals in the country in 2015 including Rocklahoma, FT. Rock, Carolina Rebellion, Kansas City Rockfest, and River City Rockfest.

2016 Lola Black released their first single produced by legendary producer Bob Marlette (Rob Zombie, Alice Cooper, Red Sun Rising) entitled “Sorrow and Sin” which ended up getting in rotation on 23 stations nationwide and climbed all the way up to #38 on the Under the Radar Active Rock Charts!!!!!!

2017 brings the 2nd single “Dead to Me” as the band is busy writing and getting into pre-production to do their first full length album with Bob Marlette. With a middle finger in the air the sky is the limit as Lola leads her band in writing the next chapter in the unforgettable experience that is Lola Black!