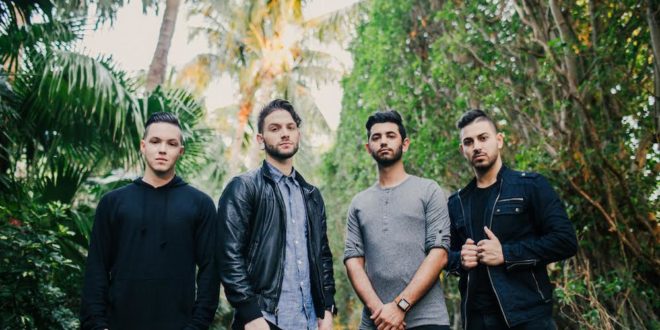 Having already gained an extensive online following, alternative rock band Fame on Fire have announced the release of their debut EP, Transitions. Fame on Fire are widely known for their covers of famous pop songs, though Transitions will feature the band performing all original material. In our interview, the band discusses what the process has been like writing new material as well as what their plans are for the future.

ME: Since you started out doing covers of popular songs, you guys have already gained a pretty big following. What initially inspired you guys to start off covering pop songs?

FoF: Great story behind this because 3 out of the 4 Fame On Fire members used to play in a local band called You Set Aside and after that fizzled out Bryan and I had moved to Orlando, FL where we started a sort of Home Studio. Long story short, Alex had asked to do a drum cover of “Unconditionally” by Katy Perry and upon doing so I may have added some guitar work. We decided we needed a vocalist on it and since Bryan used to sing backup vocals in our old band, we basically begged him to sing on the cover. Reluctantly he caved, we had recorded the track and shot a music video in a random garage and posted the video on YouTube! Originally the name of the project was “Alex Roman” because keep in mind, it was supposed to be a “drum cover” but when people fell in love with it, we had decided to join forces officially and came up with the plan to establish our name and sound by doing heavier/edgier versions of the popular commercial songs everyone loves. That stemmed not only the idea to cover pop songs but it was the start of Fame On Fire!

ME: Your debut EP Transitions is set to come out on May 19th. What can you tell us about this project?

FoF: This EP honestly means the world to us because we have put a lot of time, energy, and emotion into it for the past 2 years. We knew we had it in us to release our own original music, it was just a matter of when. Due to the success of the covers, we feel its an amazing time to put out the songs we wrote and love and we feel that all of the FOF fans will love what we have done!

ME: Since the EP will consist entirely of original material, what inspired you to start creating your own songs as opposed to covers?

FoF: Most of us in the band are songwriters so we’ve really got the process down and in between covers, we would be so full of creativity that we had to sit down and write our own music. We love the covers and will stay true, however we really, really want the world to hear what we have behind the scenes!

ME: How does the recording process of original work compare to the production of covers?

FoF: You know, the covers are a lot of fun and I mentioned that most of us do write music, however, when it comes to the covers I, for the most part, do the rewriting and structure out how that FOF sound will come to life through guitar and drums. The really cool part about writing original music is that there are no blueprints. What I mean by that is, we can do whatever we feel and it’s a true collective of style between all of us. So the process is a lot more in depth and so much more fun!

ME: When crafting lyrics, what topics do you like to focus on? Do you gravitate towards any specific themes?

FoF: Absolutely! So there is always a “theme” to our lyrical content. Bryan does most of the writing and we sit down and tweak lyrics here and there to get it ready for tracking. We enjoy basing lyrics off of real life events, some good and some bad but either way we portray that emotion through our words.

ME: Do you see yourselves ever returning to covering pop songs again or are you set to stick with original material at this point?

FoF: We are working extremely hard to push the original music and we believe it will stick with our fans, however, I don’t see us neglecting the Cover Community because it’s what got us here and we love making those pop songs our own style to give the listener an alternative version with more energy!

ME: Who are some of your biggest musical influences?

FoF: Between all 4 of us we share some common influences like Linkin Park, Maroon 5, Bring Me The Horizon, and I know we like heavier stuff like Asking Alexandria and Volumes but we also enjoy listening to artists like Zedd, Migos, and a bunch of other pop/rap/hip-hop artists. At the end of the day, it all adds to what comes out in the Fame On Fire sound!

Fof: Definitely Ed Sheehan, Bruno Mars, Katy Perry, Migos, Maroon 5, and so on. A lot of these current artists have interesting styles and very influential songs.

ME: When you guys aren’t focusing on your music, what else are you doing with your time? Do you have any interesting hobbies?

FoF: Most of us do enjoy working out, except for Paul, (sorry buddy, I love you). We enjoy hanging out and going out to socialize. Some of us do work with other musicians and artists so in a way it’s hard to not be working on music.

ME: Once your EP is released, what is next for Fame on Fire? What are your plans for the future?

FoF:  So once this EP drops we definitely want to play it live for everyone to see, so more shows. We have a lot in the works as far as new music and would love to drop a new song soon. Remember, we are super excited to release originals! Would love to travel the country to see some of our FOF friends so hopefully that will be coming soon.

ME: Any final words for your fans reading this interview?

FoF: For those of you that support us and follow what we’re doing, I just want to say thank you from the bottom of my heart. The boys and I really appreciate everything you do for us and it means the world. If you’re as excited as we are for the EP to come out then make sure you go ahead and pre-order it and jam the new single, “Another One.” Until then, we can’t wait to see what the future holds and we cannot wait to meet all of you, so once again, thank you guys!

Transitions is scheduled to release on May 19th. You can pre-order the album here.

You can find Fame on Fire on Facebook and Twitter.ᐧ

Cain Miller is an aspiring writer who hopes to work his way up and gain notoriety for his material. Having written about film, television, music, and sports, Cain is always looking to gain as much experience as he can and continue to improve his writing abilities.
@cainemiller
Previous Gallery: Bury Tomorrow at Newcastle Riverside, 17.4.17
Next Album Review: Noumena – Myrrys