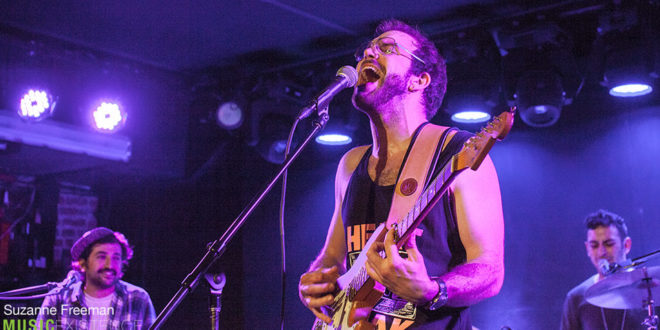 Los Angeles-based singer-songwriter, Theo Katzman, performed to a sold out crowd Friday night at Mercury Lounge in New York City. Katzman performed songs off his latest album, Heartbreak Hits, which was released in January of this year. He was joined on stage by his fellow Vulfpeck bandmate Joe Dart, Julian Allen and Jacob Jefferies.

I’m struggling with the right words to describe the show, besides: “It was freaking awesome!” The minute Katzman took the stage, the crowd erupted in applause and the energy level stayed that way until the last song of the encore. When he sang one of my favorite songs from the album, “My 1-Bedroom,” it was a definite highlight for me.

After announcing he was about to do something “completely terrifying,” Katzman excused his bandmates from the stage and performed a brand new song by himself, while his bandmates waited off stage. It was a beautiful, sad song that left the audience silent and even some of them in tears.

“Do as the Romans” is always a crowd favorite. Even though he just released the recorded version, Katzman has been playing it at shows since 2013, so a lot of people know the words and sing along. Plus, it contains one of the world’s easiest audience participation lines—the word “DO!” during the chorus.

For the encore, Katzman and his band performed an a capella version of “Love is a Beautiful Thing,” which sounded amazing. He ended the concert with the song “Brooklyn,” a throwback to 5 years ago. As you can imagine, it made the New York City crowd sing at the top of their lungs. A perfect way to end the show.

Check out the rest of Theo Katzman’s tour as he heads up the East Coast and out to the Midwest over the next few weeks.

Fun Loving Music Photographer and lover of live music in general. I am most likely to be spotted with a coffee in one hand and a camera in the other, somewhere in Philadelphia, New York City and everywhere in between. For more of my music photos: http://myphotos.bellemorephotography.com/
@bellemorephoto
Previous Anathema Announce North American Tour Dates
Next Gallery: Andrew McMahon in the Wilderness at Starland Ballroom in Sayreville, NJ 04.12.17