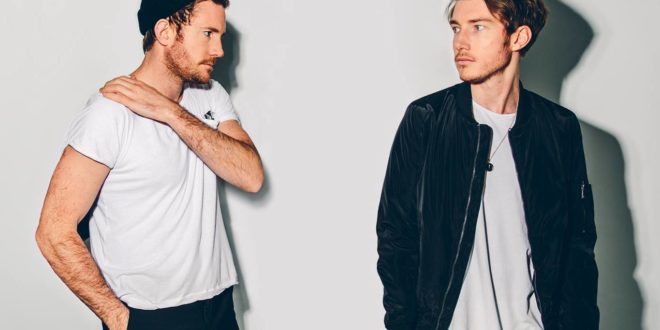 The English electro-pop duo, Fenech-Soler have announced a U.S. tour of fifteen cities in support of their latest release, Zilla. The album features catchy rhythmic grooves that will make you get out of your seat and just dance. On their last visit to New York they had a chat with us about the new album, the evolution of Fenech-Soler, growing up as musicians, and of course tea.

ME: Firstly, I’d like to congratulate you both on the latest release. How are you guys feeling?

Ben Duffy: Thank you so much! Excited! It’s been a long time coming, we’ve been planning it and plotting it for a while. Super excited about it.

Ross Duffy: There’s always a level of excitement but then there’s also nerves.

ME: What songs are you most excited to be performing?

Ben: Kaleidoscope was the first song we put out from this record and I guess it was after we recorded that song that everything started to make sense. It kind of came together as a record. We did it right at the end. We’ve done edits and extended out the end, a club edit also. That one’s really fun. It’s the sound of Zilla really, it captures what we are really as a band.

ME: Could you describe your album in five words?

Ross: Zilla. That’s turned into a genre for us. Zilla felt like the right thing to do.

Ben: Yeah, it really was the word we would use and we both knew what we meant. The sound we meant and it was that word. The title of the record came quite early on. It became the thing on our white-board in our studio that was like ‘That was the sound’, bizarrely.

ME: What do you hope your fans walk away with from your shows and music?

Ross: A smile on their face. Having had a good ol’ dance.

Ben: Yeah a smile on their face and wanting to see us again would be nice. Hopefully enjoying the music and wanting to go back to the music. I think things can seem a bit disposable with music and the way we consume music is very fast. People move on quite quickly. If this record and the live show is something that people go back to and enjoy and it withstands the test of time, I’ll be happy.

ME: What challenges if any did you guys face by self-producing Zilla?

Ben: I think the thing that we achieved, which was a challenge, was to really get down to the simplicity. I think that out of all the music we’ve ever made and written, we tend to fall into a way of throwing a lot of music. On this record I think we finally achieved, after a long time, a simplicity in our writing and in our production. Kind of taking things out rather than layering stuff up all the time.

Ross: Knowing when to finish, not working a track too much. That was the challenge because sometimes you’re not making it any better, you’re just making it worse.

Ben: We started off working in L.A. in these really amazing big studios with some really great and influential producers and stuff. But then we had this keyboard, it was the first keyboard that our dad ever bought us. We we went back to our parents and it was up in the cupboards and we got it out and were like, ‘Do you remember this thing?’ We plugged it in and took it, put it up at the studio. We pretty much did most of the synths and the sounds off this one keyboard. It kind of refined the palate of stuff that we could use. We just worked off this one really crap Yamaha keyboard and it kind of created the sounds.

ME: Stripping it down to just the bare basics.

Ben: Exactly. That was it.

ME: Where do you draw your inspirations from?

Ben: I think, musically, we’ve always been into electronic music primarily, I would say. So I guess that’s always influenced the music that we make. But we also have always listened to a lot of pop music and obviously there’s bad pop music and there’s good pop music. But we quite like when there’s a really good pop song, we respect the writing and again the simplicity and stuff like that. And that’s always a bit of inspiration. But ultimately we listen to tons of stuff. Whenever we’re writing or producing every like half an hour we stop and listen to music and talk about tracks and kinda get into records. We’re always listening to stuff, I guess that musically electronica is an inspiration.

ME: What are some of the artists you listen to?

Ross: I think that we first got into dance music and LCD Soundsystem, Daft Punk, the big hitters like that. Chemical Brothers and (Paulie) Soulworks.

Ben: We’ve always loved disco, stuff from the late 70’s and the 80’s. Pop records like The Whispers and Michael Jackson people like that, lush, melodic, big choruses are what we like. I’d also say French dance scene has always been a big influence on us and French house, we like the French pop music. Also the big ones that everyone listens to like The Beatles and such.

ME: What are some of the things you guys miss the most while on tour?

Ross: Miss the most? Sleep. (Laughs). There’s not a lot of sleep going on. Not from being rock-n-roll or anything like that. You just don’t seem to get much of that.

Ben: There’s an element where you miss a lot of friends’ birthdays and stuff like that. But on the whole, when we’ve been recording for as long as we have it’s like we just love it. There really isn’t much to be missed to be honest.

ME: Sorry! So Sorry!

Ross: We were gonna bring some tea bags but we forgot.

Ben: So British isn’t it?

Ross: Sorry, I miss tea. I miss a good cup of tea but we got coffee. Coffee is good here.

ME: As a duo now, how has the dynamic changed for Fenech-Soler?

Ben: Fenech started out as four, now two and we still chat. We’re still all really close mates. But I guess Ross and I always kind of written the music and the dynamic now is great.

Ross: Decisions are made easier. It’s only the two of us so it’s like ‘Shall we do this tour or should the artwork look like this. Do you want to mix this song with that?’ It’s just me and Ben so we could just decide real quick. Stuff moves along a lot easier in that sort of thing.

Ben: Yeah we kind of think the same thing, certainly musically. Our brains work exactly the same and even with the visual artistic side. The live show and everything.

ME: How did the both of you end up being musicians?

Ben: We grew up in a very musical household. Our father, he toured with his brother, our uncle, and they were called The Duffy Brothers. Kind of in the bluegrass world and they toured all the time with Charly Pride and Dolly Parton and all these great artists. The year before Ross was born, I lived in Dallas, Texas for a bit and I was quite young. So yeah we’ve taken influence from that and we grew up with instruments lying around. Our cousin drums for us now actually in our live shows, so it’s a family affair in that regard.

Ross: We’ve been around guitars and going to festivals with our dad.

ME: That is amazing.

Ross: It was amazing! It was really cool to like go to all these different things and it was just so natural, picking up the guitar and Ben singing. We were like five or six and I’d be playing a big guitar and he’d be singing a bit. We kind of always done it, it doesn’t seem like there was really a start to it because we’ve always kind of done it.

Ben: Our dad bought us a laptop and that’s when we started going, ‘How do we record?’ And then by complete trial and error, just like slowly over a few years, just to kind of figure out how do we do this? But we’ve always maintained a D.I.Y. attitude in the music that we make and how we operate as a band. It’s all kind of done at home really.

Ross: We really make a point of going to gigs, we try to. Going or doing your own gig is not the same as like a fan. I think you gotta do that.

ME: What was the most recent concert you’ve been to?

Ross: That’s a good question. NZCA LINES, he did a show in London recently, it was really good. I wanted to get tickets to see Metronomy, they’re doing some shows and I really wanted to see them.

ME: Are you guys more of the barricade crowd or found behind the craziness?

Ben: We’re probably standing there going, ‘How are they doing that? What is that…how…is that coming from that instrument?’ We’re quite fascinated because Fenech-Soler has primarily been electronic but then trying to do that in a live capacity is something we’ve always been quite interested by. Because we never wanted to be a band kind of hunched over laptops. It slightly and partly alienates what you’re doing with the crowd. Not everyone, some people have fantastic live shows like that but we didn’t want that. We wanted drums, bass, and guitar, that’s always been meshed with the electronics. We really like performing our songs and getting into it.

ME: Lastly, do you guys have any shout outs?

Ben: Big shout out to Ataraxi, Rebecca Haddaway who’s this fantastic new London designer who actually grew up near where we live and she made our jackets for our tour. She’s just starting out in the fashion world, she’s awesome and made Zilla jackets and it was very nice of her.

Ross: Our best mate who lives near us and has directed all our music videos and he’s doing very well, Luke Bellis. He’s really talented.

To learn more about Fenech-Soler and to purchase tickets for their upcoming tour, make sure to check them out at the links below: