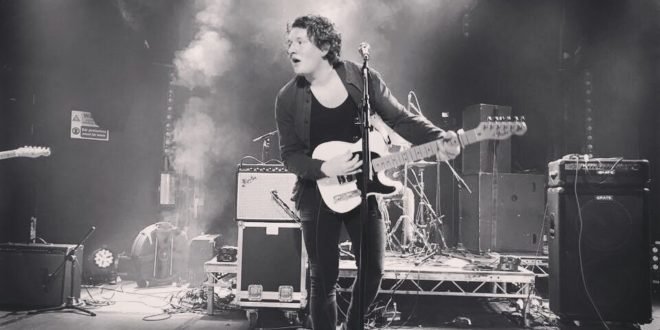 In his debut EP Dream City, singer/songwriter Tom Lumley combines impressive guitar work and his distinct voice to create a project that will surely put him on the radar for many listeners. For this EP, Lumley has taken inspiration from older rock artists but has added his own flair and personality towards the creative process. For many, this will be the first glimpse into Lumley’s artistry and it’s a pretty strong beginning note.

Dream City begins with its title track, an admittedly catchy piece of garage rock. Lumley’s vocals draw comparisons to both newer acts such as Ed Sheeran and Frank Turner, and more seasoned artists like Phil Collins. It’s a warm, inviting voice that also carries a good amount of bite to it. Lumley’s lead guitar skills are quite impressive and works well with the backing rhythm section. The talent level of Lumley’s bass and drum performers are top notch, proving that he’s brought on admirable support for his debut. Track two, “Running from Our Lives,” features a Carlos Santana-esque guitar intro which is both mysterious and engaging. The track then moves into a fantastic chorus. The precise guitar plucking, speedy drums, and higher pitched vocals all mix together immensely well to create a colder, almost sinister moment. This track is truly one of the best on the entire album and shows how diverse Lumley is as a musician. If Lumley keeps experimenting with different sounds like the ones featured on this track, then he’ll likely gain attention in other genres beyond rock itself in his future projects.

Track three, “Tonight” has some nice energetic percussion which backs up Lumley’s once again impressive lead guitar work. It’s an electric, lively work of instrumentation that seems to counterbalance Lumley’s cordial singing and lyricism. After a short yet satisfying solo, the track’s rhythm then picks up an even greater pace and shows that the EP has no intentions of slowing down. The fourth track “Done My Time” carries a cheerier tone that will likely put listeners in a good mood. This track doesn’t feel forcibly happy, though. It embraces its listeners with open arms and makes them joyful to experience it in the first place. Lumley’s shiny riffs are quite fun and greatly show how talented of a guitarist he is on top of being a skilled singer. Speaking of which, Lumley’s crisp vocals are a nice contrast to the fuzzy guitars on track five, “Open Your Eyes.” While the chorus can get a bit repetitive, Lumley eventually breaks into a solid guitar solo which further proves that he is a high caliber performer both instrumentally and vocally.

Dream City is fairly straightforward with its garage rock presentation, but it’s undoubtedly an impressive debut. There are inspirations from older rock acts of the ‘70s and ‘80s, though it brings a fresher style that is sure to resonate more with contemporary listeners who will see the project as its own portrait rather than a simple act of homage. The EP isn’t overly complicated but it shows flashes of brilliance and proves that Lumley has a bright future ahead of him. Now that he has a solid release under his belt, it will be exciting to see Lumley come through with a full-length project next time around. The moments of daring instrumentation paired with Lumley’s charm will definitely aid him when working on an entire LP. For now, Dream City is a savory taste for what Lumley has to offer.

Cain Miller is an aspiring writer who hopes to work his way up and gain notoriety for his material. Having written about film, television, music, and sports, Cain is always looking to gain as much experience as he can and continue to improve his writing abilities.
@cainemiller
Previous Single Review. Luca Chesney: “Maria, Promise Me The Next Life.”
Next Gallery: Tonight Alive at Newcastle O2 Academy, 3.4.17