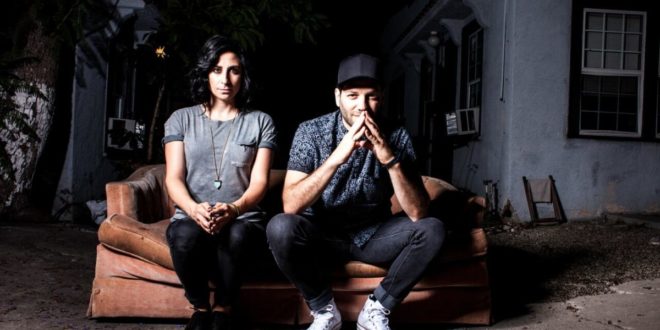 TeamMate formed rather unconventionally, as the cap on a decade-long relationship between core members Scott Simons and Dani Buncher. But while the former West Virginia University students’ rough-and-tumble romance had ended, their friendship rekindled. As such, a mix of lushly crafted electro pop rock proved to define said bond: bold, concise, breathable, and ultimately enduring.

Last Thursday, TeamMate released their self-titled debut album amidst the still sizzling Valentines season. I caught up with Simons and Buncher to discuss varietal subjects, among them the inner cogs of their musical identity, and similarly, how their platonic roots continue to contribute aptly to their current stage of growth. It’s clear that their perspective on life has become grounded, to the extent that even the sourer anecdotes are smoothed over by honest laughter.

ME: I’d like to start off talking about when you guys initially connected. In what ways did music, as well as other interests, help solidify your friendship?

Dani: Scott and I bonded over music from the very beginning. We were band nerds in college and met through mutual friends while in the WVU marching band. I was in the drumline and I guess Scott had already graduated at that point, but he was still hanging around for some reason. We made each other mix-tapes and had many day trips to used record stores listening to music to together all day.

Scott: “For some reason”? (Laughs)! I was hanging around because I was in a sweet band that you used to come see at shows. Yeah, we were constantly being introduced because we were the only two Jewish kids anyone at West Virginia University knew. I kept inviting her to the Hillel House (the Jewish student union— for the weekly bagel brunch and she was not into it at all. I left for NYC to try doing some jingle writing and came back to our college town. When I came back, we really connected and started dating.

ME: Throughout that time, you guys didn’t necessarily intend to start a band together, and were simply swapping advice for your respective projects. That all changed once you’d actually started working side by side. Did it take time for that chemistry to develop, or was it more like finding a missing puzzle piece?

Scott: Yeah, we never thought this was where we were headed when we dated for ten years. We say this to each other often. We were in the same town for a couple of years then Dani moved to NYC and we were long distance for four or five years, then we moved in together in Pittsburgh, Dani’s hometown. While we were there, my band I had been in for years had broken up and I was starting a solo project. Dani was starting a band of her own and got some touring opportunities as a drummer. When Dani and I broke up, I moved to LA but when I came back east Dani would play drums for some of my gigs. And at one gig in NYC, her brother and a friend of mine were like “That was special. You two on stage together after all these years. You should be a band.”

Dani: I think being in a band with someone takes the same sort of brain power as being in a relationship. Collaborating with someone, musically, can be a very vulnerable and intimate experience. Our history as a couple left us with some great tools of communication, patience, and mutual respect. It never felt like a missing piece but it always felt like a natural transition. From couple to band. The band chemistry was always there.

ME: What was it that resonated with you most about those early sessions, once your chemistry had solidified?

Dani: Because of our history, we were able to predict each other’s musical tendencies pretty early on. It felt like a natural transition.

Scott: Definitely. Also, Dani went through a break up after our break up and I wrote a song for her. She tracked drums on it for me and I think we both realized that we could be really honest with each other lyrically and had the same vision musically.

ME: Upon your transition to live shows, which elements of your music had you emphasized to make the most out of that setting?

Scott: Live shows are tricky. Trying to balance musical performance with putting on a show was the hardest obstacle for us especially since we play instruments that are hard to move away from – keys and drums. No, I don’t want to play keytar (laughs). We worked with a great musical director named Ted Gowans who played keys with Tegan and Sara and a brilliant tech guy Chris Fudurich who’s worked with lots of great acts but most recently Grouplove and the really helped us get our vision on to stage. We really like the dynamic of just the two of us on stage so we’ve had to get creative with how to make it sound and look big.

ME: A turning point in your dynamics happened once you began sharing lead vocal duties. How has the creative process improved, especially as you write collectively?

Scott: My favorite thing I like about writing pop music is the parameters you put on yourself. It’s almost like one of those escape rooms. You know, where there’s something like a zombie attack and you and your group have a time limit to figure out how to escape using only the tools, knowledge and people given to you? Singing everything in unison together makes us write distinct kinds of melodies because it has to work with both of our ranges. It also meant the lyrics had to be clear to be intelligible when sung by two people. There are exceptions where we split off and sing solo but having the doubled lead vocal as a stamp on our sound has made writing really fun and more collaborative. Whatever we’re singing, we both have to be comfortable with.

ME: Undoubtedly the most notable point was the very formation of TeamMate, which materialized once your long-term relationship with each other ended. Regarding the midst of the conflict period, what kinds of thoughts went through your mind as things started heading south?

Dani: During our breakup, our only focus was simply just getting through it. It was a difficult and painful period for us. It wasn’t easy and it was hard work. If someone told me that the outcome of our breakup would be that we would from a band together, I wouldn’t have believed them.

Scott: Yeah, it was a few years after when we realized that part of the healing process might be playing music together. The frustrating thing about our romantic breakup was that things didn’t necessarily head south. We had some issues and once we got to the underlying causes, we knew we still loved each other very much but we couldn’t remain a couple. I moved to Los Angeles, Dani stayed in Pittsburgh and we both did our own thing musically. After a couple of years, the band thing started, Dani moved about a mile or so from me in West Hollywood. I don’t know that we would’ve gotten to the same place without playing music together.

ME: What had you learned to be the key factor in settling that tide?

Scott: Well, I moved. Far away. To the opposite coast (laughs). That literal and figurative space helped us each move on and then come back together as a band with a new perspective as our own people.

ME: Going back a bit, do you feel like you were able to pull through, provided the bulk of your relationship was rooted in that initial friendship?

Dani: Absolutely. If our relationship wasn’t rooted in a deep friendship and mutual respect, the aftermath of our breakup would be a lot different.

Scott: 100%. We were always friends first. That made it easy for us to say that we wanted to stay in each other’s lives somehow. Once we made that decision, everything we did stemmed from that.

ME: Your first single for the album is “Damage,” which represents not only your cohesiveness as songwriters, but as two people who care about one another through and through. With the new album on the horizon, do you aim to keep the subject matter open-ended and personable?

Scott: Thank you. “Damage” was written at the moment we realized we might be on to something with the band and thought, “If we could get over our past as a couple and move on as a band it might be really special.

We’ve started writing a little for our next release whatever and whenever that may be. I think our themes will progress especially now that we have this second phase as band mates and artists together. That gives us a lot of new material to pull from. But we’ve always written from a personal place. Strangely, I find that the more we zoom in the more relatable it is, because sometimes we are able to express things people are feeling or going through in their lives that maybe they haven’t found a way to say for themselves.

ME: All things considered, how has your relationship as bandmates and friends grown in the long run?

Dani: I think we’re closer now, as band mates, than we ever were as a couple. It feels like this is what we were supposed to be from the beginning.

Scott: Yeah. We joke that this was a hell of a way to end up being a band if that’s all we were supposed to do this whole time.

ME: What words of encouragement would you give other bandmate couples, in terms of finding a balance between musical and romantic partnerships?

Dani: Well, we broke up before we started the band. So, my advice would be to get that out of the way first (laughs)!

Scott: (Laughs)! Yeah, I can’t imagine being in band with a girlfriend. Being in a band with an ex seems WAY easier.

I come from a family who is passionate about all things music. I learned to sing at an early age, and by 13, had my very own Fender Strat guitar. I tried my hardest at learning all that I could. Because I was born with cerebral palsy, I had to teach myself an adaptive playing style. I learned to write and record my own music, despite these difficulties. In college, I started making great use of my writing abilities by reviewing music, as well as copy editing. I guess it's best to stick with what you know, while welcoming a fair challenge at the same time.
Previous Interview with Jack Bergin and Matt Thompson of Void of Vision
Next Gallery: Frank Turner & the Sleeping Souls at Agganis Arena in Boston, MA 2/18/2017