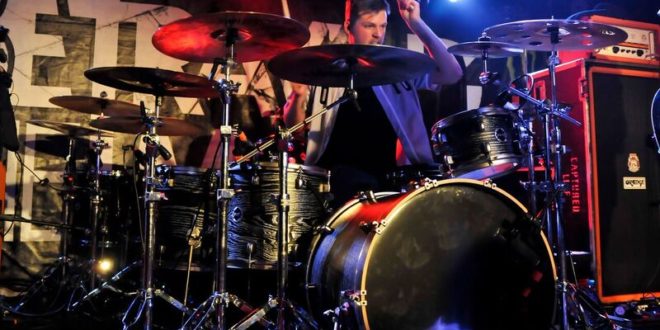 Interview with Jack Bergin and Matt Thompson of Void of Vision

Aussie five-piece Void of Vision took the stage this week as part of their UK live debut supporting Chelsea Grin on The Self Inflicted European tour alongside Make Them Suffer and Betraying the Martyrs.

Music Existence had the opportunity to chat with Jack Bergin (Vocals) and Matt Thompson (Bass) on the first albums they ever bought, their debut album and plans for the future in 2017.

ME: Let’s start out with something easy – Tell us the story of how Void of Vision came to be?
The story of VOV came from the back room at our bassist, Matt’s house, after 5 dudes all came together from completely different backgrounds to become 5 great friends.

ME: You guys are originally from Australia, right?! But since then you guys have gotten the chance to tour in the US and now, over here in the UK – How do you feel the music scene differs among these places?
Originally from Australia, yes! The music scene is so, so different. Not only the reception but the crowds are so much more intimate than what we’ve seen. We’re eternally grateful that we’ve been given the opportunity to take our music to all these different places.

ME: Is there any specific country, besides your home, that is close to your heart? Why?
I’m sure each of us would have some dumb, sappy reason for this question for the sake of an answer, minus George. He was actually born in Germany and we’re very excited to hit there for the first time on our current tour and have him show us where he grew up.

ME: So, you’re six shows into your tour with Chelsea Grin and Betraying the Martyrs – How does it feel?
It’s a culture shock for sure, nothing could prepare us for how hospitable everywhere has been or how welcoming everyone is. We don’t want to come home, quite frankly.

ME: This is your first time in the UK since releasing Children of Chrome –  How do you feel the reception of the album has been so far?
The reception has been completely different to home, people had just warmed up to the album tracks back in Australia, over here it’s those tracks that are getting the best reactions. It’s very cool to see how it differs everywhere!

ME: You most recently released a music video for your song “//” and, to me, it gives off quite a strong political vibe – Can you tell us a little about what inspired that storyline?
The particular inspiration for the song originally was stemmed from current affairs in Australia regarding inadequate immigration policies, but as for the video, a lot of inspiration was definitely drawn from larger political influences coming to power in other countries. Specifically, The United States of America.

ME: You did a whole lot in 2016; Strikehard Festival, a sold out UNIFY – What was your favourite part of last year?
Favourite part of the year was definitely the release of our debut album, was a huge first and big tick off the bucket list! Second favourite would definitely have to have been Unify Festival.

Quick-fire round! Feel free to answer these in short.

What is your favourite food on the road?
Nuts for everyone except Jack – If he eats them he dies… Pussy.

What is your funniest tour memory?
Meeting homeless Jon Bon Jovi in Sydney!

What was the first album you ever bought?

The first show you ever went to?

What is your favourite song right now?
Jack: Come Down – Anderson .Paak
James: Stratosphere Love – Ocean Grove
Matt: Lost in The Echo – Linkin Park
Mitch: Everybody Wants to Rule the World – Tears for Fears
George: Doing It Again – The Roots

Have you ever had an embarrassing moment on stage? What happened?!
Puking after getting too lit.

To close, what’s next for you guys? Are there any more projects or tours you’re working on? What are you most excited about in 2017?
A whole lot of writing, we have a bunch of cool shows and tours to announce for when we get back home, some blasts from the past and some very different venues. Exciting times!

Tags The Self Inflicted Tour Void of Vision