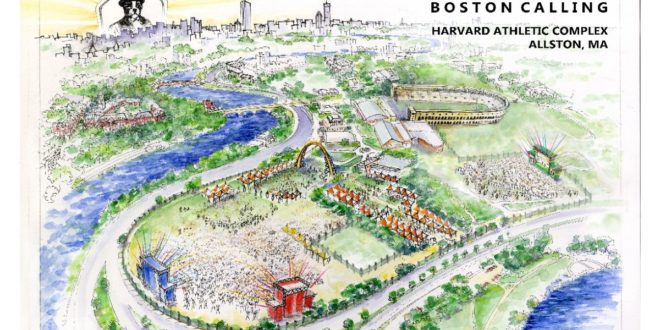 4
SHARES
FacebookTwitter
Boston Calling, one of the Northeast’s most iconic events and one of the largest metropolitan music festivals in the world, announces its 2017 lineup today. This year, Boston Calling more than doubles its number of music acts with an exciting collection of 45 performances, which once again have been assembled by founding member of The National, Aaron Dessner. Tool, Mumford & Sons, and Chance the Rapper will headline the festival. This year also marks a historic change for Boston Calling; it will be held for the first time at the fields of Harvard Athletic Complex in Allston (65 North Harvard Street, Boston) on Memorial Day Weekend, May 26-28, 2017. The new location allows Boston Calling to greatly expand as a multi-disciplinary festival: this year, in addition to its 45 act lineup performing across three outdoor stages, it will add a film experience curated by Academy Award-winning actress, producer, and director Natalie Portman, along with comprehensive food, drink, and visual arts components – details on each of these are forthcoming. A limited number of Early Bird tickets are available today, Thursday, January 12, 2017 at 10:00am EST at www.bostoncalling.com and regular priced tickets will be available when Early Bird tickets are gone. A rendering of Boston Calling’s new layout and artist images from the 2017 lineup can be found here. Boston Calling’s 2017 lineup announcement video can be accessed here.

“Between our location and lineup, 2017 will undoubtedly be the most exciting Boston Calling yet. We are really in awe of the support and success the festival has seen thus far, and we are more excited than ever by the future. At the same time, we remain committed to our roots and very clear on the elements that make Boston Calling so special,” said Boston Calling Events, LLC (BCE), Co-founder and Chief Executive Officer Brian Appel.

“We are incredibly excited about this year’s edition of Boston Calling. Moving to our new location has allowed us to expand the programming of the festival to include many more of my favorite artists from different corners of the music world. The addition of the film program curated by Natalie will create a whole other dimension within the festival experience. We can’t wait for May,” said Aaron Dessner.

The 2017 Lineup
In true Boston Calling fashion, the 2017 lineup creates an experience that is both eclectic and star-studded, with music that crosses genres and includes performers who have stood the test of time, as well as those who are just beginning to make their mark. As music curator Aaron Dessner promised, the festival’s expanded footprint allows Boston Calling to deliver a wider range and diversity to the festival’s programming.

Artists showcasing new material include Bon Iver, which scored a Grammy nomination for its first album in five years, 22, A Million, and has not played in Boston since 2012, The xx, which will release their first album in four years on January 13th, and Solange, whose critically-acclaimed new album A Seat at the Table recently debuted at number one on the Billboard 200.

Artists on the lineup who are known for riveting performances and their ability to captivate the audience include Weezer, Major Lazer, The 1975, Sigur Rós, Nathaniel Rateliff & The Nightsweats, Sylvan Esso, Run the Jewels, Cage the Elephant, and Francis and the Lights.

Finally, as with each Boston Calling, local acts will be celebrated. Highlights for this year include Boston’s alt rock favorites Buffalo Tom, hip-hop up-and-comer Cousin Stizz, Worcester’s own The Hotelier, the recently reunited punk band Piebald, and Allston based Vundabar.

The 2017 Location
This year’s Boston Calling will take place at an exciting new location, as the festival moves from Boston’s City Hall Plaza to the fields of the Harvard Athletic Complex. The change in venue has enabled the festival to expand its programming to feature a combination of music, film, and visual art.

In a shift from its bi-annual model, Boston Calling bypassed its September 2016 festival, making May 2017 its first installment since the May 2016 edition at Boston’s City Hall Plaza. In total, this is the eighth edition of the festival since its 2013 inception.

With its new and expanded footprint of 16 acres at the Harvard Athletic Complex, Boston Calling has tapped world-acclaimed festival designer, artist and sculptor Russ Bennett to bring the look and aesthetic of 2017’s festival to greater heights. Bennett is most known for creating the layout and visual design for such world-renowned festivals as Bonnaroo and Outside Lands, as well as for being the artistic brains behind many of Phish’s visual spectacles, including their historic show in Coventry, VT in 2004.

Boston Calling is proud to have Delta Air Lines, Miller Lite, Samuel Adams, and 47 Brand as initial sponsors for this year’s festival, and many more partners will be announced in the coming months.

Tickets:  Early Bird Three-Day General Admission, VIP and Platinum VIP Passes are on sale TODAY, January 12, 2017 at 10:00am EST at www.bostoncalling.com. Early Bird General Admission Three-Day Passes are available for $245 plus fees; these offer access to 45 bands across 3 outdoor music stages, admission to all indoor, air-conditioned film experience screenings and programming (TBA, first come first serve), access to over 30 incredible food vendors, a wide selection of beer and wine offerings, an array of fun outdoor games and attractions, sponsor exhibits, and more surprises to be announced. Regular General Admission tickets will become available immediately when Early Birds sell out – for $269 plus fees.

Private elevated Skybox lounges are also available for up to 50 people; details and pricing are available upon request.

Getting There: Boston Calling is best accessed by the T on the Red Line’s Harvard Square stop; from there it is a short walk to the festival’s main entrance.  Boston Calling will also be coordinating with taxi and rideshare programs for safe and easy pickup and drop off points; there will also be bike racks available onsite.  At present onsite parking is available only to Platinum VIP package purchasers.

The Madison Square Garden Company (NYSE: MSG) owns a controlling interest in Boston Calling Events, LLC.  MSG is a world leader in live sports and entertainment that presents or hosts a broad array of world-class events – including concerts, sporting events, family shows and special events – in an unparalleled mix of celebrated venues that span four of the nation’s largest entertainment markets. Those venues are: New York’s Madison Square Garden, The Theater at Madison Square Garden, Radio City Music Hall and Beacon Theatre; the Forum in Inglewood, CA; The Chicago Theatre; and the Wang Theatre in Boston.  In addition, MSG has a diverse collection of properties that includes some of the most widely-recognized sports franchises: the New York Knicks (NBA), the New York Rangers (NHL) and the New York Liberty (WNBA), along with two development league teams — the Westchester Knicks (NBADL) and the Hartford Wolf Pack (AHL).  The Company also features popular original entertainment productions — the Christmas Spectacular and New York Spectacular – both starring the Radio City Rockettes. More information is available at www.themadisonsquaregardencompany.com

Stephen Vicino is the founder of MusicExistence.com. He created this site to give talented musicians a voice and a way to be discovered.
@@svicino
Previous Gallery: Caleb Hawley at MilkBoy in Philadelphia on 1-13-17
Next Iron Reagan Reveals New Song to Fuel Your Pre-Inauguration Rage 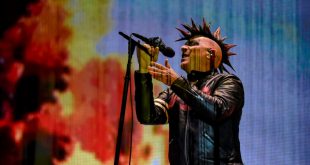