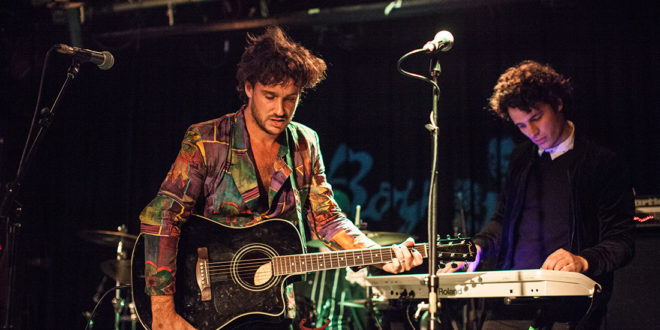 Gallery: Caleb Hawley at MilkBoy in Philadelphia on 1-13-17

Last Friday the 13th, Caleb Hawley, a soul singer from Harlem, NY, played a show at MilkBoy in Philly. In addition to some staple songs from his last album, Side 2, he played some new unreleased songs. Among them were a song about procrastination called, “Carelessly,” which made me laugh because we all procrastinate from time to time. He also played the new songs, “Addiction,” aptly named since it’s about addiction and “U and I,” a song he wrote for his wife. I really enjoyed his revamped version of an old song he wrote called, “We All Got Problems.” There’s a new funky beat in the background and he has a sound similar to Prince.

Caleb is an energetic and entertaining frontman. His on stage shenanigans are hilarious and always gets a response from the audience. During this show, he handed an audience member a drum pad and he had a drum off with Jordan Rose, his drummer. The rest of his band came down into the audience and cheered them on! At the end of the show, he led the entire audience in hip thrusts, increasing in number until the final time he had everyone doing 21 hip thrusts in a row. The moral of the story? Don’t think you can attend a Caleb Hawley show and just in the corner all night.

Here are some highlights from the show.

Fun Loving Music Photographer and lover of live music in general. I am most likely to be spotted with a coffee in one hand and a camera in the other, somewhere in Philadelphia, New York City and everywhere in between. For more of my music photos: http://myphotos.bellemorephotography.com/
@bellemorephoto
Previous Silversun Pickups Announce 30-Date “Summer Gods” Amphitheater Tour With Third Eye Blind
Next BOSTON CALLING MUSIC FESTIVAL ANNOUNCES ITS 2017 LINEUP HEADLINED BY TOOL, MUMFORD & SONS, and CHANCE THE RAPPER