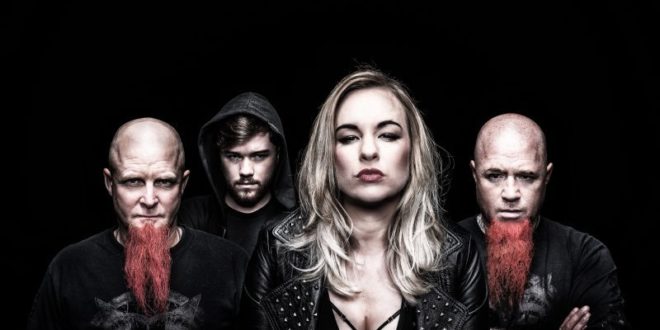 Six years onward, New Zealand’s Devilskin has proven a substantial asset in the mainstream rock realm. Their debut album, We Rise, climbed to platinum status last year, having steadily maintained the #1 position on both the Album and Kiwi Artist Album charts. But behind such surefire success lies something unbreakable—familial unity. Each of the band’s four members is blood-related. Bassist Paul Martin is backed by his son Nic on drums, his twin brother Nail (guitar) and sister-in-law Jennie Skulander (vocals) capping the lineup.

Come mid-November, the band returned with Be Like the River, a punchier and better-sequenced album by comparison. What remains a constant, though, is the dynamic that the family members instill upon its presentation. The result is one that is slick and palatable, with a sonically charged, texture-driven aesthetic.

Opening with “In Black,” the band launches into action straightaway. Skulander’s vocals are sharp and constant, blending nicely against Nail’s chugging riffs. As the song progressed, I made note of how tightly mixed her vocal harmonies were. There’s a resounding width to them in a way that allows the instrumentation to breathe, without clouding its atmosphere. This effect is utilized in such a way that both the pre-chorus and chorus are equally explosive. I was particularly taken aback as well by the solo at 1:50, the guitar and bass exhibiting two distinct fuzz tones. In a similar principle, Skulander’s dually personified vocal identity encapsulates the song’s mood—an angelic temerity bolstered by gradually grim undertones. The following tracks continue to demonstrate a solid kinship between instrumentation and thematic concepts. “Mountains” is rightfully chosen as the album’s carrier single. It brings a more direct expression its tom-heavy percussion and blistering guitars, while the successor, “Pray,” incorporates a subtler approach. That is, slight changes in the tonality of its riff sequence—intricately woven at that—and a light soundscape adding a kind of ethereal depth to the chorus. Throughout this sequence is a constant struggle of holding one’s own against the evils of the world, while recognizing the inevitability of being consumed by its influence. Nonetheless, “Voices” is a definite highlight of the album, sporting a post-grunge chord sequence and an audacious refrain (“I have an army and their voices are loud/I have an army and they’ll take you down). Brash, precarious undertakings are coupled with fiery confidence, effectively demonstrating the conscience and the ego at war.

Of the midpoint tracks, “FYI” better represents the transition of power. Its momentum increases, while imagery of corporatism and corruption denote the song’s focal point. The song’s progression carries the inevitability of time; everyone grows old and will eventually be left for dead. Once again, Skulander’s tonality seamlessly shifts from clean to grim, in punctuating the enemy’s extent of power. For subsequent songs, thematic expounding takes time to set in, although the effect is strong by all means. One such instance is demonstrated in the album’s latter portion, particularly between “Bury Me” and the complementary “Grave.” Both tracks indicate a renewed awareness of one’s vulnerability, dark, down-tuned riffs continuing to bolster Skulander’s vocals. The latter track demonstrates her grim style in an interestingly utilized solo phase, wrapped in a mass of synths, phasers and reverb. Bridging the two cuts is “House 13,” a hair swirlier of a jam showcasing the starkest extent of misfortune. Empathy fizzles, honesty repressed, and prayers unanswered, all the while society represents a mere fraction of a worldly assembly line. That notion is aptly portrayed in the chorus, which fares competent as a breakdown in the same mame manner. It is by this point as well that Skulander exhibits a broader range. There’s something about how her stationary voice snaps to a higher register in quick succession, and that, I can totally get behind. Toward the end of the album, the penultimate “Animal” demonstrates that quality equally well. Admittedly, given the songs length, I initially thought I’d be thrown into an aesthetically similar—bordering stagnant—track, but I was taken by surprise. Not only does it take its time in the development of its structural components, but a compelling statement of maintaining dignity. By her line, “I stand a woman/Not an animaI,” I gleaned as much emotions as was capably delivered. The closer, “Limbs,” performs exactly as its placement on the album. It is the longest track, while also proving a rightful culmination of all the previous songs. Although the heaviness factor takes a back seat in favor of string-based arrangements, the tonality of the vocals and instrumentation encapsulate a final battle of sorts. Compared to the ending of the last album, a much denser, anthemic presentation, this one already emits an assured, not to mention wholly sensible maturity.

Overall, Devilskin’s follow-up blazes with flying colors. Having previously achieved platinum status with a rough-hewn, guitar-heavy debut was an ambitious achievement in every right. Now, Be Like the River is the next logical step. Amidst the brute, unbridled ruthlessness of demonic forces, Devilskin’s familial dynamic reigns resilient once again.

I come from a family who is passionate about all things music. I learned to sing at an early age, and by 13, had my very own Fender Strat guitar. I tried my hardest at learning all that I could. Because I was born with cerebral palsy, I had to teach myself an adaptive playing style. I learned to write and record my own music, despite these difficulties. In college, I started making great use of my writing abilities by reviewing music, as well as copy editing. I guess it's best to stick with what you know, while welcoming a fair challenge at the same time.
Previous Album Review. Marlena Anna: Habitual
Next Eva Plays Dead Announce New Single ‘Bones’