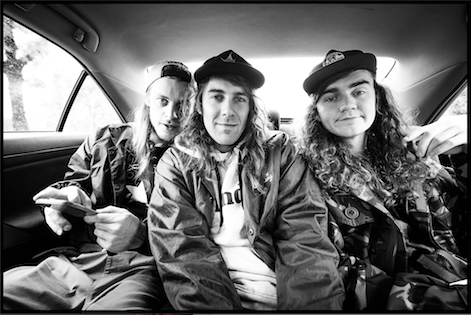 Australian stoner-punk band Dune Rats has dropped new single Scott Green, the next taste of their upcoming 2017 album on Dine Alone Records, and the follow up to Bullshit, which was released earlier this year.

Scott Green sees the Brisbane-Sydney three piece stuck at a party wondering “Who’s Scott Green?” – if the joke hasn’t hit you yet, check out the boys’ Facebook page for more info. The single was produced by Zac Carper of FIDLAR, who is on board for the whole album. Rumour has it, “Scott Green” will be home to another classic Dunies video – who knows what the boys have in store for this one, given their history of one-upping themselves with each new video?? The single is available now and will be followed shortly after by album release news.

The guys weighed in on how the single came to be: “We made Scott Green out at Joshua Tree in America with Zac from Fidlar. We had 5 days to write some songs in between tours in the US & UK and we busted out a fuck load of tunes having a blast in the middle of bum fuck nowhere. One day we went to ask people at Walmart if they “Scott Green?”…and it took all day. When we got back Zac said “you better have a fucken song after wasting a day looking for who’s got green. We just started making a song about the day – “Who’s Scott Green” – and that was it.”

It’s been a non-stop ride since Dune Rats released their self-titled debut album in 2014, which Rolling Stone (Australia) dubbed an “unassuming statement of intent. No bullshit punk done well.” From sold-out Australian tours including co-headlining with punk legends Cosmic Psychos, to festivals around the world, 40 shows throughout Europe with The Subways and a HUGE North American tour with besties FIDLAR, the band have had a stunning ascent so far, which shows no sign of stopping.