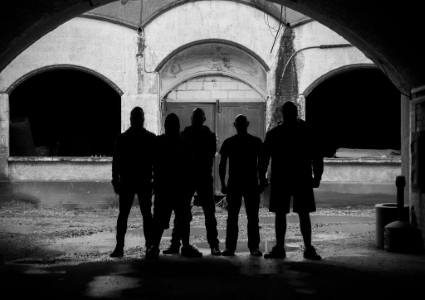 This December, England’s Allfather channel something beyond the metal in our veins; that is, a grander awareness of war-torn dismay. Fresh off the critically praised Bless the Earth with Fire album, released last May, the Kent metal quintet returns with a fitting follow-up single, “Inherit the Dust”. All proceeds of the song (which debuts via Bandcamp) are contributed to the Help Refugees charity. The organization tends to expatriates from targeted European and Middle Eastern territories, providing them food, shelter, and safety.

In the single’s press release, vocalist Tom expresses its genesis. He points to the West’s longstanding impulsive pursuit of bombing the Middle East. Surmising that while the West posits peace as an ultimate goal, there is no excusing their continual—and nonetheless oblivious—surprise in their ramified actions. Tom proceeded to emphasize the extent of the situation: “We’ve created a world where in some places children fear clear, sunny days as they know these are the best days for drone strikes to be carried out. Our governments claim we want peace yet offer only obliteration,” he was quoted as saying.

The song’s intro comprises a nerved snare rhythm accentuated by scrawling harmonic leads. Barely 20 seconds in, a brooding riff prowess makes a surprise entrance. Atop these happenings is Tom’s vocal identity—unabashedly grim, commanding and fully aware. Dissonance plays in sparse increments; all the while imagery of bleak hysteria punctuates each verse. At the chorus, the grim vocals become surprisingly tuneful, contrasting the presence of angels with that of ongoing destruction. Eventually, the involvement of instrumentation accumulates into a neck-snapping breakdown. Its subsequent solo holds equal clout, forming a balance between the high and low end elements. Once the intro riff repeats toward the end of the song, the whole perspective of its presentation is captured effectively.

Overall, “Inherit the Dust” applies Allfather’s normally supernatural subject matter into a wrenchingly real and wholly current context. Its ruthless riff attack, gut-curdling vocals, and tactical percussion are ideal components in the single’s construction. Besides its packed presentation, its intention has the potential for tremendous impact—the kind that gives myriad refugees a safe space to prosper.

I come from a family who is passionate about all things music. I learned to sing at an early age, and by 13, had my very own Fender Strat guitar. I tried my hardest at learning all that I could. Because I was born with cerebral palsy, I had to teach myself an adaptive playing style. I learned to write and record my own music, despite these difficulties. In college, I started making great use of my writing abilities by reviewing music, as well as copy editing. I guess it's best to stick with what you know, while welcoming a fair challenge at the same time.
Previous Album Review. Guytano: I Am Inside My Body
Next New Single “Forgiveness” prod. by Shemaiah A. Reed