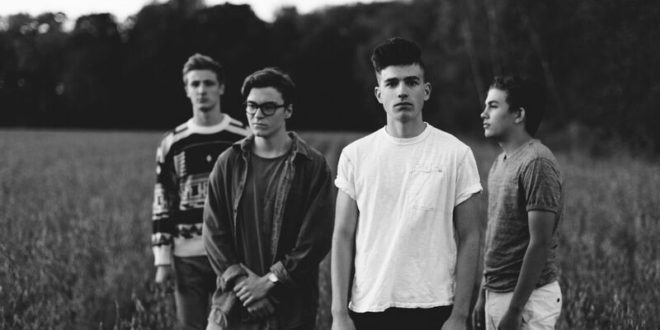 Album Review. Guytano: I Am Inside My Body

Guytano will release their debut LP I am Inside my Body on December 9th and it’s a polished record that the bandmembers have been aiming for since before they were teenagers.

“Blue Skies” is one of the many highlights of the album. It is the perfect blend of alternative vibes that Guytano does so well. The opening instrumentation of synthesizers and a thumping bass will make listeners want to get up and dance and it fits really well in today’s alternative music scene. It’s undeniably catchy and one can’t help but hear comparisons to Young The Giant, especially in lead singer Grant Hamilton’s voice. But make no mistake, Guytano is out to carve their own mark. The track goes back and forth between and uptempo beat and a more slow groove and it keeps the tune interesting, dynamic, and will also keep listeners on their toes not sure what to expect next. It is this unpredictability of “Blue Skies” that makes it utterly engaging and showcases that Guytano is a solid band. This is for sure the most radio friendly song on the album, but it still retains an edge and with Hamilton’s smooth voice sailing easily over every word, “Blue Skies” is one song not to miss.

Later on, Guytano uses a minimal backbeat to front “Munroe” a low key, yet energetic at times, tune that balances itself out on lows and highs. Hamilton’s voice is the star of the show here reaching new heights between the different vocal registers which is sure to delight listeners. There is also beauty in the somewhat somber simple lyrics such as “the simple seasons of you passing.” It is a long song, over four minutes, but this is what is expected of Guytano and the fact that it never drags shows how skilled the band is, producing music that one wishes could go on forever. There really is a scaled back approach to this song that creates a synergy that is downright magical. One could argue that the tune sounds much like the other songs on the album and one wouldn’t be all that wrong as the whole album tends to bleed from one track to the next, but that only highlights how well produced the album is.

“Noir Rouge” is unlike anything on the LP and is the standout number. It is quiet and unassuming, haunting and powerful thanks to Hamilton’s tour de force vocal performance in combination with the lyrics. This is a song for anyone who has ever felt lost, and using music as a powerful tool, Guytano is able to connect with its listeners like never before. The piano driven track, with bits of electronic sound, shine a different vibe on the band, almost entirely stripped and very vulnerable. This piece is all about the atmosphere and mood it creates, and Guytano play that up without ever feeling like they are trying too hard and that in itself is an extraordinary feat. This beautiful ballad is sure to strike a chord with many listeners and deserves any praise it gets from fellow reviewers because it is a winner.

While the album on a whole does shine, and comes across as effortless, the flow an absolute joy to hear, “Clocktower” suffers from a flat delivery and “Between the Pines” doesn’t have much of an impact. Still this is a superb and fresh debut from Guytano that will be hard to match on any future albums. But something tells me Guytano is up for the challenge.

Tags guytano i am inside my body music review