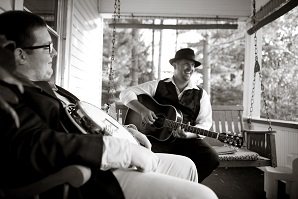 Quite some time has passed since I’ve heard some exceptional modern country music. I have long dismissed its current permutation as “corporate rock with a hint of twang”. On the other hand, West Virginian duo Steve Hussey and Jake Eddy’s upcoming release, The Miller Girl, redefines my conception. From just its first few notes, the album carefully incorporates a type of expansive nature to its instrumentation, such that every nuance is captured crisply and clearly. Instantly, I’m impressed. But throughout the listening experience, I had to make note of how each element wholly contributes to the album’s distinctiveness.

Calling the album’s storyline a breath of fresh air might seem short-sighted, at least on the surface. Its subsets prove common within country music realm—awry romance, faith, and heartfelt nostalgia. However, Hussey’s vocal delivery adds remarkable sincerity to such themes. His projection isn’t the typically outward, radio-friendly southern drawl. It is subdued, yet quaint, with the confidence of having harnessed the purpose of challenge and triumph. Teenage prodigy Jake Eddy complements Hussey’s musicianship, with a seasoned understanding of pacing and tonality. Opening with “Little Shove,” the album begins on a note of emotional reinvigoration. Hussey expresses his transition from a breakup, memories still intact, but hazy and diminishing in importance. All that matters is starting on a new foot, as nature’s happenings bring newfound clarity in the process. For its upbeat, straight-ahead structure, Hussey and Eddy’s six-string pulse is expansive. A foundation of guitar gleams in one ear while its accompanying banjo dances in the other. A notable highlight starts at the 1:16 mark, where a call-and-response aesthetic between both instruments fully immerses the listener. Their combinative presence defines the album’s following tracks, “Into the Ether” and “Chalk It Up”, albeit with stronger dynamic implementation. Within that span, the mood shifts from bittersweet to euphoric. Hussey’s reunion with his lover is offset by a longing for intimacy—a sentiment proving impulsive, but all the more relatable. In doing so, he is willing to shut out the remorse from his wrongdoings and continue on a clean slate. Almost as quick as the mood rises, it becomes tarnished by way of an affair. Further, “Long List of Goodbyes” revs the momentum back to that of the first song, much like the heart doing a 180. What’s also reintroduced, though, is a confidence that other partners exist from a broader perspective.

The middle part of the album finds Hussey reevaluating his priorities. In “Master Your Mind,” he places his basic needs for survival first. Love is mentioned last, not necessarily as a need of less importance, but in accordance with God’s plan—to take action while maintaining a firm sense of patience. The drums assert this level of determination with a thumping kick build, along with the assurance that prosperity naturally accumulates with persistence. I liked the transitional layering of the banjo solos, as it creates a chorus effect resembling some kind of organic heaviness. Directly expounding off the song is the expectedly titled “Looking for Love”. The instrumental vibe is decidedly lighthearted, its structure almost resembling that of a countrified glam metal jam. Hussey feels intimidated while observing close couples, but keeps a steady hope, having been reminded of his patience once again. I like how the song has a fun, hook-filled structure, and can definitely envision it as a follow-up single for the album. The title track starts seeing Hussey’s luck increase, as he finds a girl he believes could love him for a lifetime. He not only addresses her physical beauty but that of her strong, resonant faith. Besides the song’s lyrical content, I also noted its textural incorporation of a ukulele, how it blends seamlessly into the guitars. “A Better Day” exhibits a similarly balanced instrumentation just as well. During the verses especially, the combined rhythms are lushly melodic, accentuating Hussey’s timbre. It seems as though he has found common ground with his love interest, and is eager to experience as much joy as possible. The penultimate track, “I Pick You,” ideally captures a decision rightfully made. This time, Hussey’s euphoric state is that which comes from reciprocated love, rather than impulsivity. The percussion exhibits a kind of gentle waltz against the guitars, further insinuating that his faith and patience have paid off for the long term. On the final track, “Sweet,” Hussey backtracks through his journey, noting the moments of loss and acknowledging them as stepping stones toward growth. He then directs his thoughts to the present, where he has found a place of total fulfillment, capped with the serene setting of drizzling rain.

Overall, The Miller Girl is a prime example of modern country done right. Steve Hussey utilizes a refreshingly distinctive tone, which, coupled with the instrumentation, makes his narrative sincere and ultimately engaging. Whether this album is simply intended as a merging of creative energies, it definitely has the potential to rekindle the spark in country music’s currently fledgling reputation.

I come from a family who is passionate about all things music. I learned to sing at an early age, and by 13, had my very own Fender Strat guitar. I tried my hardest at learning all that I could. Because I was born with cerebral palsy, I had to teach myself an adaptive playing style. I learned to write and record my own music, despite these difficulties. In college, I started making great use of my writing abilities by reviewing music, as well as copy editing. I guess it's best to stick with what you know, while welcoming a fair challenge at the same time.
Previous Album Review: Tumbler: Come to the Edge
Next Gallery: Sleeping With Sirens at House of Blues Boston, MA 11/8/16