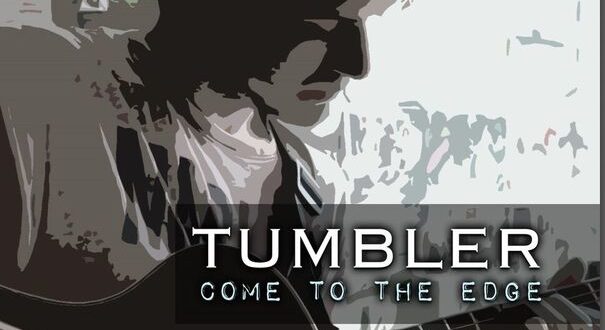 Harry Grace and Richard Grace are keeping it all in the family with their band Tumbler’s release of the full length album Come to the Edge, and it is a beautiful thing to experience.

The record kicks off with “Black Sheep” which sets the tone for the whole LP. It’s gritty and folksy but also playful, something that listeners will come to find Tumbler does really well. The combination smoky but sharp vocals with a commanding instrumentation all adds up to a near perfect tune. One can easily imagine it being played in a back alley club, listeners captivated by the message and vibe of the song. It has a slightly modern rock feel to it but also has a throwback quality that Tumbler excels at playing up in their tunes. This could easily be something Green Day could put out in their more less aggressive moments, especially when one takes into consideration the lyrics such as “you gave your life so we could flog it for pretty much free.” Along with taking advantage of the nursery rhyme “Baa Baa Black Sheep” Tumbler showcases that they are inventive and can be serious but still have a bit of fun at the same time.

“Sweetest Thing” is just that. Sweet and simple it carries an air of late Beatles, which Harry Grace cites as one of his band influences. It starts with a bit of a chatter that continues throughout which gives one the feeling that this is all being recorded right on the spot. Heavily sounding like something Paul McCartney could have written and sang with The Beatles, or even solo, Tumbler taps into innocent and pure emotions that are guaranteed to make listeners smile wide. Light instrumentation accompanying the cute lyrics like “aint love the sweetest thing” all works together making this one of the absolute highlights of the record, showcasing a different side to the group while still providing superb poetic lyrics that have a big visual element to it. It is the type of song that will get stuck in listeners heads and make them immediately happy, and one can’t find any fault with a band who is willing to be a little mushy and cute because it is coming from a sincere place.

But perhaps the most striking and memorable moment on the album comes early on in “Falling.” This is most rock pop and radio friendly Tumbler tune on the LP and it surprisingly is a complete treat to the ears. It has that power pop ballad feeling to it, like something that could have been released years ago, but that is not a bad thing. The chorus is something to marvel in “I don’t know what you just said/not sure what it meant/but oh my God say it again,” Grace sings with passion and desire that drips off of his tongue, palpable and satisfying on every level. “What does it mean to say I’m falling?” Grace asks which is such a deep lyric, but in the context of such a pop infused song it almost goes by without a second thought.Almost. Catchy and pulsating with life “Falling” is the most energized tune on the album and one that this reviewer will have on repeat for days to come.

There are a few less than stellar moment on the record like “Week” which isn’t memorable but still boasts a great chorus and good lyrics and “Winter Cold Heart” which lacks a melody that sticks, but looking at the whole package, this is one LP you need to scoop up and enjoy.