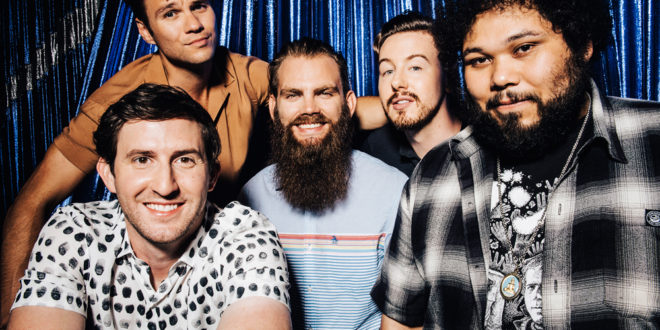 Somehow managing mixing certain pop traits from their previous album, Instant Gratification, with some of their heaviest material to date Dance Gavin Dance have delivered again with Mothership.

Mothership starts off running, “Chucky vs. The Giant Tortoise” rushing the listener right into the mix. However, this bold move with a hard-hitting opening track works well for Dance Gavin Dance. In fact, it sets the stage for the rest of the tracks which all flow and lead into one another expertly.

Following a nontraditional set up for songs, Dance Gavin Dance manages to express their musical talent and lyrical mastery in each track. Although DGD fans have become semi-used to the band’s experimentation, there’s always a surprise in store with each new album.

The back and forth between singers sometimes comes off as too strong, but rest assured that each track works itself out so that the listener doesn’t feel overwhelmed by the end of it. This discourse between vocalists is definitely more present in certain tracks compared to others, such as the incredibly lyrical strong “Young Robot.”

After 12 tracks, everything is wrapped up in the final track, “Man Of The Year.”

In its first half, “Man Of The Year” seems to serve as the somber sedative to Mothership, with faint instruments and a tender, hurt voice serving as the only sounds within the track. However, once the midpoint is reached, the track shifts instrumentally, discussing betrayal lyrically as the music begins to sound pained and strained. The lengthy track is possibly the best off Mothership, its narrative voice stronger than any other track. Truly, choosing “Man Of The Year” as the final note for Mothership is an admirable, bold decision.

Overall, Dance Gavin Dance may have not produced their best album ever with Mothership, but they definitely created a solid addition to their discography that has won the hearts of many of their fans.