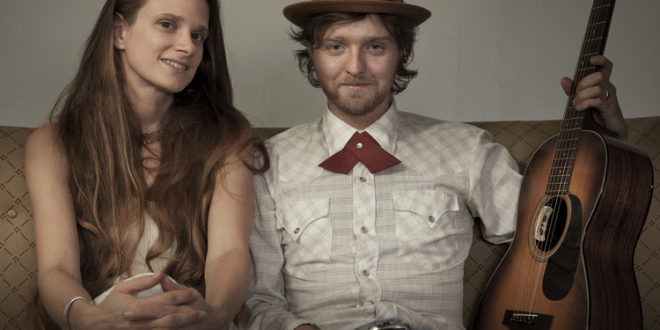 Sarah Bowman and Rene Coal Burrell make up the folk duo Famous October which released their debut album  earlier this October and upon listening it is clear that Bowman and Burrell were meant to showcase their talents to the world.

At the start of the album “Counting on Spring” sets the stage and mood for what listeners can expect from the LP. Burrell sings somberly, telling a tale as old as time itself, and his low but twangy register ,working in tandem with melancholy string instrumentation, equal what a modern folk song sounds like in today’s musical landscape while still paying its dues to folk singers of yesteryear. Bowman is missing from the track altogether and that is a bit tragic as the duos voices meld together wonderfully, but Burrell shows that he can carry a track by himself. By the time Burrell slowly and passionately sings “if our love is a seed I’m counting on spring,” one can’t help but be left feeling hopeful after such mournful times that Burrell has painted a picture of. Even though it drags a bit at over five minutes it’s still a magnificent treat.

“Ropes of Sand” which appears on the last half of the LP is the perfect example of the best of best when it comes to Famous October’s music. Both Bowman and Burrell sing together in perfect harmony complimenting each others voices note for note behind a simple string instrumentation. It’s quiet and beautiful and all together emotional. “I was climbing up ropes of sand holding up hopes of sand they crumble in my hands” the duo sings hauntingly and the basic background music helps bring out the best in the two. They never sound more together and emotive than when their voices collide, and though Burrell kind of takes a bit of a lead here both artists shine on their own in their own individual way. This is all part of Famous October’s charm, as is the fact that they exceed at storytelling and sucking listeners in to their tales with ease. One wishes more songs on the record could be as memorable as this, but there are still plenty of other worthy tunes to talk about.

“Missing Song” is not missing much as it perfectly encapsulates what the duo are capable of when they work in synch with each other, heart and soul. There’s a bit of a The Civil Wars vibe here, Burrell and Bowman’s voices soothing and chilling at the same time. The lyrics on their own are enough to give listeners goosebumps as they sing “an empty day and empty page it’s your name at the tip of this pen that’s missing.” The duo are so much stronger when they are complimenting each other on ballads such as these with instrumentation that only heightens the emotions they are putting forth. It’s sweeping and swells and dips in all the right places, the type of track one might want to listen to on an autumn night wrapped up in a blanket with a hot cup of tea. It’s warm and inviting and at the same time utterly gutting and that are the ingredients that make up the best of Famous October and why this particular track stands out miles from the others on the record.

However not every song is in top form. The first track “The Frost” is not the best introduction to the duo as it doesn’t really gel and while it’s still pretty good it doesn’t showcase what Famous October are capable of. “When Things Are Different” is a little too peppy and not well suited for the duo and “Firsts & Lasts” comes across as too saccharine. But one must remember that this is Bowman and Burrell’s first album and if they can focus more on what seems to really work for them their next release will be much improved.

Kenny Alvarez is an emerging hip hop artist based in Brooklyn, New York. Under the …