DARKH Release Official Video For “My Curse” Off New Album

Hard Rock / Metal band DARKH have released the Official Music Video for their track “My Curse“, the second single off of their debut album A Story Yet Untold, which was released on September 29, 2016. The video is a follow up to their critically acclaimed “Bury Our Bones” music video, which was also the first single from the the album.

The album was Recorded and Produced by Rob Vitacca of Lacrimas Profundere at Weltraumstudios in Munich, Germany, Mixed and Produced by Stacy O’Dell (New York City, NY), and Mastered by Steve Corrao (Sage Audio, Nashville, TN). All songs were written by DARKH.

The story of the song is about that special someone in our lives. And when we filmed the music video we didn’t just want to capture a cliche boy and girl thing, we wanted something obscure and unique. And who doesn’t love a bit of Grindhouse vibe! – Touby Fisher (DARKH)

The band, formerly known as BITCH&CHIPS, was established in 2009 and has shared the stage with many of Europe’s most promising young rock bands. In 2013, the band was asked to open for KISS.

After having recorded multiple EPs,…DARKH will be releasing their debut full-length CD “A Story Yet Untold” in September 2016 and a tour will follow. 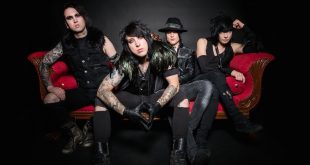