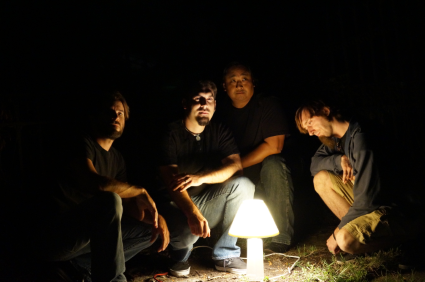 EP Review: Static Tension – Out of Reach (Out January 6)

Ohio’s Static Tension is a progressive grunge quartet whose roots stretch back to the late 90s. Their lead guitarist, Greg Blachman, had initially coined the name for the band’s subsequent release, 1999’s Paint By Number. The band then ceased activity after two more years, but not without an effort to reform and refine. And they did just that—over a decade later.

By 2015, a functional lineup solidified with Blachman alongside vocalist Rob Rom, bassist Ritchie Paik and drummer Anthony Sager. That newfound passion would be punctuated by tighter live performances, and sustaining a knack for heartfelt songwriting. Indeed, the aim for new material would no doubt be realized.

In kicking off the New Year, Static Tension will release Out of Reach, an EP that earnestly bolsters their brand of progressive grunge to authenticity. Upon hearing the opener, “PSM”, the presentation took me by pleasant surprise. It is not particularly flashy or crisp, and instead gunning for a spacious, live aesthetic. There’s jaggedness about the guitar that emanates prog-rock experimentalism of Tool mixed with metal. While I found Rom’s vocal delivery initially rough-hewn, I appreciated how he ends each phrase with a vibrato similar to Layne Staley. The closeness of the harmonies may not be of a proximate Staley/Cantrell vein, but it doesn’t have to be; it succeeds on its own. Next up is “Obstacle of Doubt,” which reminds me of a single that Alice in Chains would have put out prior to Facelift. The energy of the riffing contributes greatly to the EP’s momentum. After each instance vocals, there is a careful implementation of subtle guitar harmonies, with a substantial build up at the halfway point. This effectively demonstrates the varietal extent in Rom’s voice, as well as the interplay between vocal and instrumentation. The song is also strong in its broad subject matter of internal strife, without having to play down to its audience. “Faith to Fault” continues along the accessibility factor, and I wouldn’t be surprised if it was released as a single. I found it an interesting hybrid using the Stayley vocals atop a Nirvana-esque arrangement. The solos are a comfortable fit—sparse, only played when opportune, and all structured in a groove. How the band manages to make this work so well is beyond me, but I’ve continually been in a state of awe with each listen.

On the flip side of the EP, “Down For Three” sustains that single potential. The bass feels particularly prominent during the buildup, seamlessly blending thereafter. Once Rom begins singing, it’s as if the pacing is reinvigorated–a bright and uplifting drive to momentarily offset the somber mood. I had this image come to mind of the three distinct grunge dynamics, heavy metal, punk, and indie rock – bonding together in a combinative force. The chorus is the heaviest hitting on the EP, really getting its elements in order and preparing for what’s to come. Both parts competently carry the song forward, the first emphasizing rich structural melody and the second, a simple, straight ahead sequence by contrast. By the penultimate track, “Back Inside”, the band makes a better effort in showcasing their progressive spectrum, both in a subtle and prominent sense. While it initially comes in the form of extending the length of phases, the melodies give a clear indication of influences being channeled. There’s a sense of patience as to how they are utilized, without being overtly noticeable at any given time. One moment, a definite Dream Theater vibe brews the intensity of its guitars and percussion, feeling gradually Alice in Chains during certain vocal inflections in the chorus. Again, the implementation of the solos feels welcome in engaging the listener throughout the song. The title track closes the album, creating a sense of especial depth in the instrumentation. This allows nice breathing room for the vocals to project throughout. Making note of the song’s tribal percussive foundation, I envisioned a type of brooding heaviness to ensue. However, I was pleased to find the song go in more of a classic hard rock direction. The leads and riffs exhibit a tone similar to early 70s Pink Floyd, and the liberal use of reverb makes the mix unfold into a psychedelic jam. Whereas “Down…” and “…Inside” peak in terms of catchiness, this song ultimately encapsulates the most development in terms of length and atmosphere.

Overall, Out of Reach is a valiant effort not only for modern rock but music in general. Static Tension’s initial disbandment took place during teen pop’s uprising, and there has since been a demand for organically heavy music that this band will successfully meet. Amidst the EP’s heavy-handed hooks and resounding nostalgia, the band makes a statement that the alternative is alive—kicking, dancing, moshing, and everything in between. And we better listen to believe.

I come from a family who is passionate about all things music. I learned to sing at an early age, and by 13, had my very own Fender Strat guitar. I tried my hardest at learning all that I could. Because I was born with cerebral palsy, I had to teach myself an adaptive playing style. I learned to write and record my own music, despite these difficulties. In college, I started making great use of my writing abilities by reviewing music, as well as copy editing. I guess it's best to stick with what you know, while welcoming a fair challenge at the same time.
Previous Gallery: Scandal at Szene in Vienna, Austria 17/9/2016
Next Album Review: The Devil Wears Prada – Transit Blues