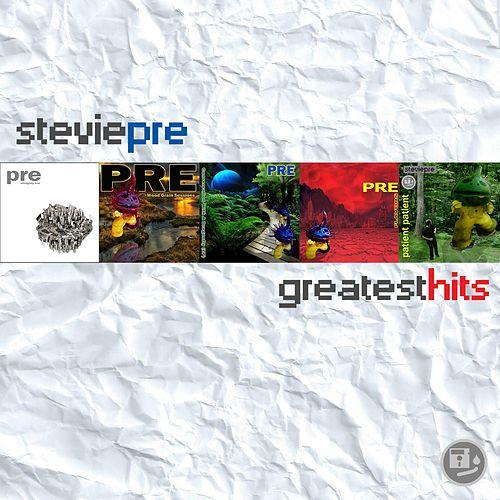 Another day, and yet another musical genre to explore, and challenge me. Information on this New York musician is unusually sparse even in the Internet age and age of social media. His Facebook page has a paltry only eighteen “likes” -I feel therefore that the Greatest Hits title of this release can only be clothed in very heavy irony… Musically I would put it in the categories of dance/trance and electronica.

Electronica is an umbrella term that encompasses a broad group of electronic-based styles such as techno, house, ambient, drum and bass, jungle, and industrial dance, among others.  It has been used to describe the rise of electronic music styles intended not just for dancing but also concentrated listening. I feel on listening to this release that is the term that can best be attributed to this album. Ambient background sounds with spoken rather than actually sung vocals brings me to consider Gorillaz in terms of similarity and perhaps Radiohead with the spacious sonic landscapes.

A remarkably assured and instinctive piece of work, one that speaks of good times on the dance floor while not being afraid to throw in more poignant and affecting emotions. The album is vital and alive, and it culminates into these unsuspecting breathless, religious moments that reach well beyond its surface qualities.

Greatest Hits steps to a more confident beat, certain of its stride within buzzing and humming machinery. This is an electronic record, from its steely surface to its chattering CPU, a vision of pop music syphoned through the more outré corners of  Stevie Pre’s catalogue. Built from the ground up, it doesn’t trade in shop-bought samples.

If everything seems controlled and calculated on an initial listen, some patience may be required to pick the locks and uncover emotion nestling within the wires and whirrs. Not always comfortable, but consistently engaging, this is an example of a artist channeling influences in commendably creative style. Persist and there’s real beauty to be found in its digitized designs.

With several cuts, Stevie Pre lets his designs evolve steadily – these tracks rarely rush the listener from the first second. As a result,  the tracks are allowed to  become hypnotic experiences, capturing the senses. Everything is sequenced so that, like all good stories, there’s a distinct beginning, middle and end. In another dimension, this is the soundtrack to a high-budget sci-fi romp. In the here and now, it’s a great escape from the drudgery of everyday ordinariness, a rollicking ride on one seriously funky UFO.

The late 00s saw everyone – clued-up, layman or otherwise – form an opinion on dubstep. A genre turned gimmick, many said, replicated by everyone from Britney Spears to what’s left of the Sugababes.

Such mainstream focus often heralds the winding-down of a genre, but Stevie Pre is ready to test that theory. The New York pioneer is stood with fists clenched, brandishing a brave new approach that not only breathes life into the concept, but carries an element of auteur ship.

From the outset, instrumentation and performance plays a crucial role in the  album. Not my personal musical cup of tea – I am not a familiar visitor to the sort of clubs where this musical genre would be played. Pleasant and ambient but I prefer my music with more balls.