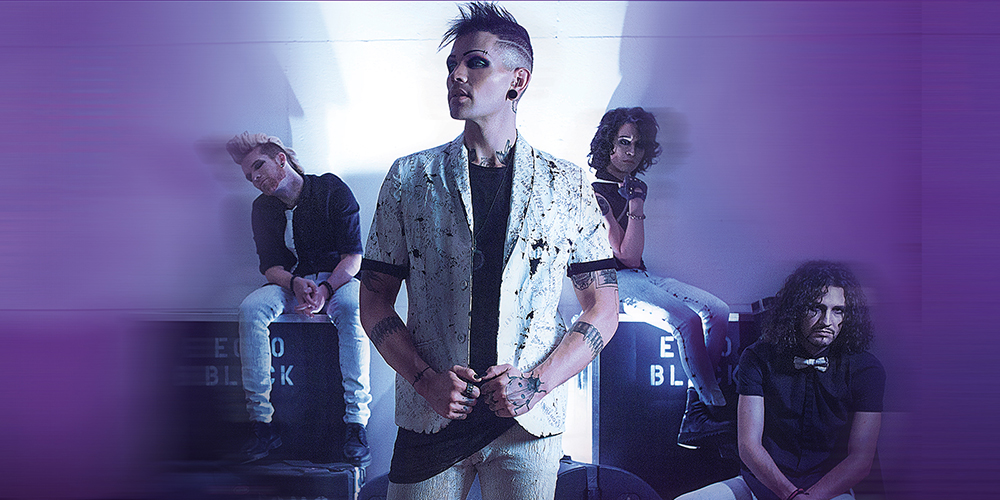 Rock/pop band Echo Black just released their new single and music video for “Chemicals” today! Fans can get a first look exclusively on Billboard. “Chemicals” was produced by Matt Squire (One Direction, Kesha, Ariana Grande) as well as Andros Rodriguez (Shakira, Justin Timberlake) and directed by Chris Newhard (Sia, Jessie J, Train). The four-piece has come a long way since their debut late last year, making an organic shift from the constrains of industrial rock into the pop world. With diverse backgrounds and influences ranging from classic rock, basement punk, and pop music production to drag culture and experimental makeup, Echo Black keeps their fans on their feet with every release. “Chemicals” is a perfect example of the band pushing boundaries as the video stars a same-sex couple in a rock tragedy.

“‘Chemicals’ is so special to us. It’s a culmination of so much work over so many years. We all pretty much agree that this song and video mark the moment in our career as Echo Black that we became the band we always wanted to be. We’ve been writing and playing together for over 2 years as this lineup, and some of us for many years before that, and I think the team we put together for this release really killed it. The video is really an expansion of the song. It’s about the brain confusing flesh and fantasy.” says vocalist, Danny Blu. “When it came time to film the video, we tapped Chris Newhard to direct it, as he had just directed our last video and truly nailed the tone and atmosphere we were looking for. Victor Hugo styled the video and we were able to work with some amazing fashion brands including Dee Serret, Material Memorie, Madness Is, Ritual, Couture Mask, and Augusto Manzanares. All of our makeup was provided by MAC.”

This summer, Echo Black unleashed their music video for “Perfect” featuring Telle Smith of The Word Alive exclusively on Fuse. One week prior to the release, the band unleashed the track on Alternative Press, receiving up to 10,000 shares in under 7 days. In 2015, they teamed up with Revolver to launch their debut music video “Burn Another Day”. The track and video features Davey Suicide, who the band toured with last fall along with Combichrist and The Birthday Massacre. Danny asserts, “We are hungry and we are coming out with guns blazing”.

New York City-based rock/pop foursome Echo Black is comprised of members whose musical inspirations range from basement punk to Frank Sinatra, and everything in between. The boys credit their unique, catchy, pop-flavored sound to their writing process; echoing one idea off another and, bouncing components around until the song begins to speak to them. Danny Blu (vocalist) and Billy Long (drums, keys) have roots that go back as far as the high school marching band. They picked up Felix Skiver (guitar, vocals) and Rob Gnarly (bass, vocals) along the way and have been inseparable since. As if their blood-pumping music wasn’t enough, their live show is something you have to see to understand. Nothing short of an electrical storm of energy, Echo Black is not an act to be missed.