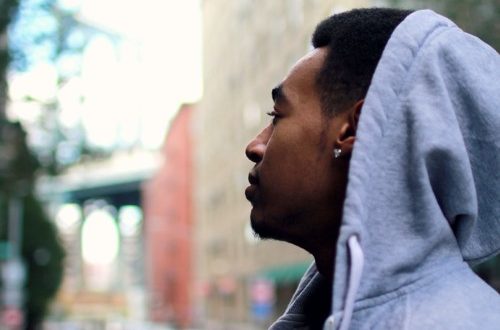 This young hip hop artist has his sights aimed higher than most. Driven to do far more than turn out reams of braggadocio disguised as art, unoriginal odes to babes and bling, and formulaic exhortations to audiences that they get their freak on in some less than inventive fashion, New Jersey born and California bred Zay P moves freely between music’s easier pleasures and outright catharsis without ever losing sight of what brings people to this music anyway. The production reinforces this idea with its emphasis on the vocals without ever managing to obscure the significant input music naturally has on Zap P’s presentation. This is an artist taking bead on the widest possible audience. Zay P’s songs aren’t confined and, instead, move with the freedom to explore many different areas of experience.

Songs like “B.F.D.” plumb into the most personal areas of his psyche. Zay P has no appetite for melodrama, however, and instead keeps his language focused with a strong muscular quality – resisting digression, omitting needless words. “Hit Me Up” featuring Darius DeFour is a much lighter hearted affair than the first song, but no less capable of invoking a response from its listeners. Further cementing his individuality, Zay P doesn’t even indulge listeners with the typical hip hop song about sexual desire. He wants to come on like a poet instead, curling her toes with his words, rather than throwing his mojo around hoping she melts in its heat. “Father’s Day”, produced by Classixs, is a harrowing look at Zap P’s personal life, unsurprisingly his relationship with his father, and the artist pulls no punches. The accompanying backing track is equally unflinching and claustrophobic. It’s one of his most all-around satisfying songs.

“Orlando” reaches far past the trite and superficial for a deep and complex reflection on the 2016 terrorist act claiming countless lives at an Orlando, Florida nightclub. It relies on a strong groove that Zay P exploits to the fullest and his voice nestles in the song’s countless corners and turns without ever supplanting the groove. His stylistic fleet-footedness takes another entertaining turn with “Zay You Will”, a spacious and melodically tinged quasi-epic with some of Zay P’s most assertive lyrics to this point. The light soul coursing through the swinging grooves of “Made for This” propels another strong track. His vocals are as consistently good as ever and his continued talent for laying down syllables in just the right points will never fail to impress. “Shot U Up” is another startling turn in style with its deliberateness, building from a sparse beginning and accelerating the tempo one careful step at a time. “The Life” opens with some multi-tracked straight vocals before segueing into a popping backing track. Zay P, along with guest star Darryl Sir’rah, lay down impressive vocal lines over the top that snake through the passages.

These are the impressive first shots in a soon to be explosive rise. Artists like Zay P rarely emerge these days – market forces typically compel a much more uniform, predictable approach than what this New Jersey is likely to ever pursue. Instead, we can already label Zay P a maverick.