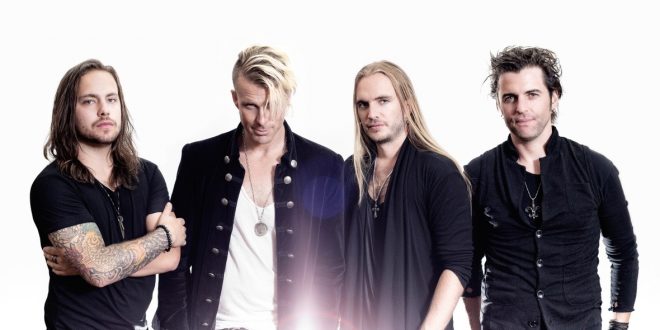 Art Of Dying continues on their unstoppable trajectory to the top with their latest EP Nevermore, out on September 2nd. This six-track collection is packed full of strength, determination, and drive.

The Vancouver-based hard-rock band formed in 2004 and is made up of Jonny Hetherington (lead vocals), Tavis Stanley (guitars), Cale Gontier (bass), and Cody Watkins (drums).

Disturbed guitarist Dan Donegan and vocalist David Draiman, who were blown away by the Art Of dying’s first self-titled independent record, invited them on their North American tour in 2008. With Stanley and Gontier joining the band’s ranks on the eve of the run, they played onstage for the very first time during soundcheck. It was during that show’s opening that the quartet developed their now-trademark three-way vocals.

Upon releasing Vices and Virtues in 2011, Art Of Dying toured extensively in support of the album. They shared the stage with Stone Sour, Shinedown, Avenged Sevenfold, and opened for Apocalyptica’s 2015 Shadowmaker tour. “After wrapping up an extremely difficult record (Rise Up, 2015) with David Bendeth (Bring Me The Horizon, Breaking Benjamin, Of Mice and Men), we have circled back to our roots on Nevermore,” states Stanley, “working with long-time collaborator and producer Mark Holman.”

Nevermore subtly fades in with its first track, “All Or Nothing” before exploding into driving rhythms. The lyrics fuel the motivation to really give everything your all, which seems to touch on Hetherington’s past of playing on the streets. The incredibly awesome guitar solo brings this track to stunning perfection.

“Nevermore” is a quieter track with an ethereal quality. Disguised as a ballad, this piece is more like a self-motivational victory speech. The courage it takes to find the inner strength to walk away from an abusive relationship is made stronger by the driving guitars during the second verse. I would have liked a more well-rounded ending, but the way this song cuts off with a sweeping guitar solo feels as though it’s a closing of a chapter.

After the abrupt ending of “Nevermore,” “Seen This Coming” is a kick in the gut. This track pulls no punches right from the start. I hear resemblances to Breaking Benjamin and Saint Asonia. I’m thrilled to hear Gontier’s earth-shattering bass licks that remind me of Five Finger Death Punch. Stanley’s soaring guitar solo is too short, in my humble opinion, but thankfully I didn’t have to wait long for it to resume in the background during the closing round of the chorus.

Making a clear departure from the rest of the EP, “Paradise” is more alternative than it is hard rock. The misdirection of the name becomes clear with lyrics like “I’m bleeding on the inside, and no one even knows.” Overall, I find the song to have a somewhat Nirvana quality in the music, with grungy guitars mirroring the depression in the words.

Watkins’ drums pound out a simple, yet driving beat in “Cages” that sets the stage for the rest of the band to slowly swell to their full power. Hetherington holds back his vocals until the chorus – roaring the lyrics like he’s breaking free. It feels as though the EP has been building to this point, and the staggering force of the band is easy to give in to.

Art Of Dying has definitely honed their sound on this EP. I believe the quartet found a renewed drive in their roots, and I’m sure Nevermore will give them the fuel they need as they climb to further heights. You can pre-order a physical copy of the EP on their website or a digital version on iTunes. You can also listen to Art Of Dying’s previous albums on Spotify.

Previous Jupiter in Velvet – The One in the Many
Next Why Charleston, Columbia and Greenville, SC Are Becoming an Attractive Site for Up-and-Coming Music Artists to perform and expand their fan base.