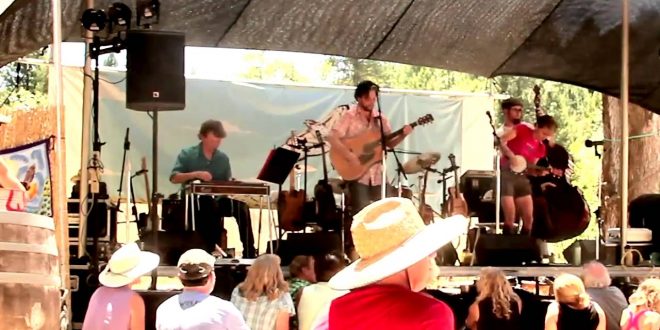 You can hear faint echoes of Arlo Guthrie, Woody Guthrie, Bob Dylan and many of the great folk singers of yore on Monument, the latest platter from Cali-bred twangers Spark and Whisper. They just have that aura of a time gone by. The thing is that they differentiate themselves from legends of the past by pumping their sound full of mountain-moving blues rock, traditional country barnburns and even a pinch of jazz-spiced, funky rhythmic playing especially when it comes to the drumming.

In modern band years, three releases strong is almost an eternity and there’s no doubt that Spark and Whisper are determined to spread their message across the land through intensive touring and good ol’ fashioned hard work in the studio. Do they succeed? The answer is an astounding, YES. As a quartet backed by additional instrumentalists (keyboards, cello), Spark and Whisper bring a sound that’s a little bit old and a little bit new all in one. These cats sure know how to groove as a lot of the material benefits from the melodic, roughshod vocals of lead singers Anita Sandwina and Velvy Appleton. You would think that the two are married in the way that each one compliments the other for a series of checks and balances that keep in the music in line at all times. Whether handling groovy, riffed-out jams flavored by acoustic guitars, blasts of pedal fuzz and hard drumming (the title track, “Bottom of the Well,” “Far from this World,” “A Little Bit More” or the Santana-kissed “Mojo”), going deep into overgrown fields and purveying sky high mountain country music (“River Winding,” “Around Again,” “The Circle” or the gorgeous, understated endnote “Bless this Mountain”) or letting rip with a poppy rock jammer like “California,” the band proves that they can tackle any sound that comes to mind.

The secret here is all about the chemistry as Anita and Velvy’s blend of leads, harmonies and back-up vocals is enchanting and enticing at all times; switching main roles with glee and backing each other in all of the right places. It also helps that the rhythm section stays busy even in the ballads and accoutrements such as keys; piano and cello give the group’s sound a depth that few could even dream of in the current musical climate. The songwriting feels real…the kind of stuff that comes natural and from the gut and doesn’t need any sort of hyperbolic press release or posturing to attract new fans. There are really no weak songs in the batch and despite following a very singular template throughout; it’s very tough to say that one track sounds like another. Spark and Whisper are at their very best when they take things down the arcane paths of the old days such as on square-dancing, corn huskers like “Bottom of the Well,” “River Winding” and “Bless this Mountain.” In these particular moments the group sounds completely at home with their art and really conjures up images of the early 1900s, albeit seasoned with dollops of sizzling electric guitar and grinding rhythmic thumps.

It’s this mix of styles and eras that really makes Monument something special from start to finish. Even a pure power pop rock song like “California” works because the musicians playing it truly believe in the message they’re conveying. While maybe not a truly original release, Monument has more than enough going for it to make it well-worth a purchase in a world where guitar driven music is in seriously danger of disappearing forever.