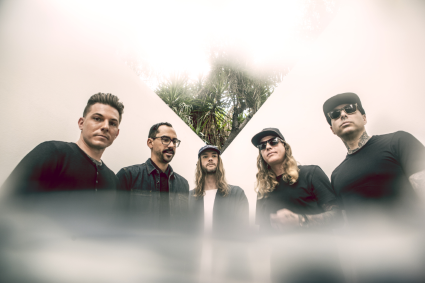 On this new record, it is evident they have evolved through experimentation. Trademark sounds from their previous works resonates throughout their new album. The sound is refreshingly distinctive to Dirty Heads, which is evident by the decision to have a self-titled album. Dirty Heads embrace and welcome listeners to rock out to sunny west coast beach reggae that has also been combined with electronic synths and programming as well as intermittent rapping. Dirty Heads never lose the essence of their feel good sound.

A cool new twist to the record is the album’s divide of two parts: Day and Night. Day includes, “That’s All I Need,” “The Truth,” “Doesn’t Make You Right,” “Feeling Good,” “Under The Water,” and “Too Cruel.” Night includes, “Oxygen, Red Lights, Smoke & Dream,” “Moon Tower and Realize It.” The Day and Night split symbolizes the contrasting tones and moods of the record.

“The Truth” (not played live) has a catchy chorus and melody as well as a quick rap in the middle. A track similar to “The Truth” is “Oxygen” (live), which is one of my favorites and was happy to experience it live. “Oxygen” is a song that breathes new life to the record. It is apparent that experimentation gave way to “Oxygen” with its production and quirky dance tunes. The lyrics and sentiments are heartfelt, simple, and straight to the point. The crowd favorably responded by waving their hands, recording key moments, and happily sipping their drinks. Another favorite is “Feeling Good,” which is all about getting what you want and casting away your anxieties, cares, and worries.

In the middle of their set, Dirty Heads played “Red Lights.” The crowd chanted and rapped along without missing a beat. Following that track on the album is “Smoke & Dream,” which exudes electronic hip hop beats. The mood then changes with the next song, “Moon Tower.” “Moon Tower” slows down tugging at nostalgic and moving lyrics; “Driving down a dark road, Rolling down the window, Hands out, hands out, hands out now, Let’s go outside Look up at the stars tonight.”

The record winds down with the hip hop and go-go rapping for “Realize It.” The lyrics showcase meaningful messages and great songwriting skills. The song smoothly transitions from rap and hip hop to jazz. Dirty Heads ended their epic set with hits such as “Lay Me Down” (With Rome) and their first single off the new LP, “That’s All I Need.” Both tracks feature audiences singing and jamming their hearts out. If you haven’t given their new record a listen, please do, as you would be missing out.

photo based human in nyc and phoenix. sneaking in my camera everywhere I go.
@https://twitter.com/ginabgarcia
Previous Gallery: Dead and Company at Shoreline Amphitheatre in Mountain View – July 30 2016
Next X JAPAN: Drafthouse Films Set Fall U.S. Release For Acclaimed Music Doc ”We Are X’ ‘