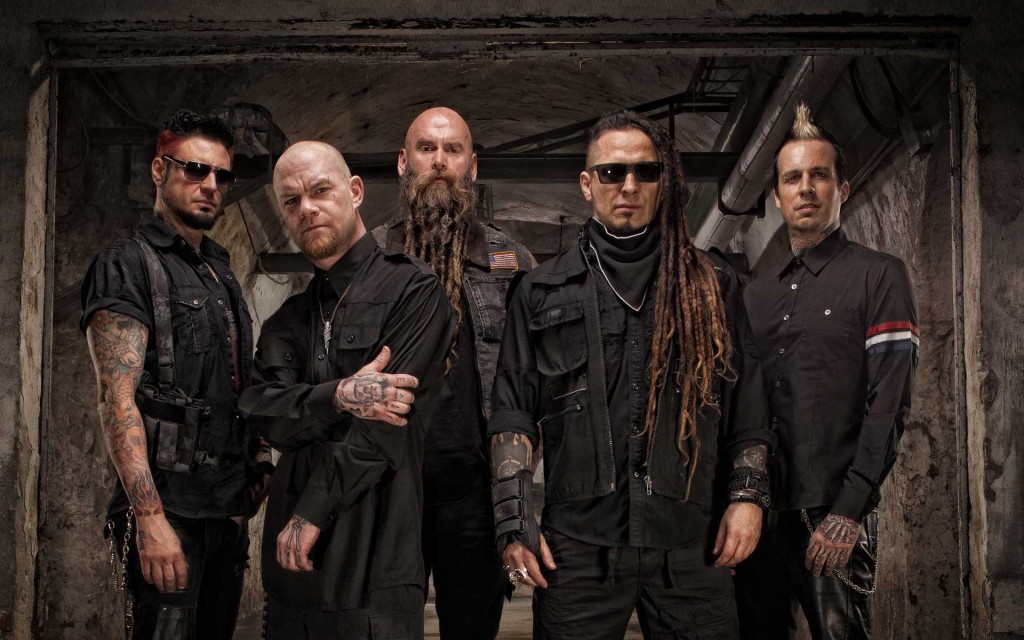 Five Finger Death Punch has unveiled the video for their next single “I Apologize,” worldwide on Vevo today. Culled from their sixth studio album, Got Your Six, the chilling clip follows Ivan Moody through a cemetery housing our era’s most notable deceased rock icons, ranging from Elvis to Kurt Cobain and Amy Winehouse to Jimi Hendrix. The clip was shot at Los Angeles’ famed Angelus Rosedale Cemetery with Nathan Cox directing the band-conceived storyline.

“The video is a dark somber metaphor that speaks for itself. I don’t think we need a parallel narrative to explain it or emphasize its impact as almost everyone knows someone struggling with some form of addiction. It’s real for everybody. We have even been losing exceptionally bright, talented people who you’d assume know better. No matter how much support you provide, ultimately it’s everyone’s own decision to face their demons or perish” explain the band members.

“I Apologize” is the fourth single from 5FDP’s latest highly acclaimed album,Got Your Six, which hit new chart heights for the band around the world with its September 2015 release, including a US #1. The album has since sold 370K units and already boasts two #1 hit singles, “Jekyll And Hyde” and “Wash It All Away.”

As previously announced, Five Finger Death Punch will embark on their most extensive tour of Canada to date in September, co-headlining Canadian arenas from cost-to-coast with Papa Roach before kicking off the biggest U.S. tour of their career so far in Little Rock, AR on October 18 co-headlining arenas across the country with Shinedown through December, thereby effectively co-headlining the two biggest North American Arena Rock Tours of 2016. See all dates below. Look out for more US dates to be announced soon. For tickets, VIP packages and more info visit www.fivefingerdeathpunch.com

Both tours are also highlighted by Special Guest Sixx:A.M. featuring vocalist/producer James Michael, bassist Nikki Sixx and guitarist Dj Ashba. U.S. newcomers From Ashes To New will support on the Canadian dates while UK newcomers As Lions, featuring Austin Dickinson, will round out the supporting lineup in the USA.

All bands on the US tour have partnered to donate $1 from each ticket sold on the tour to hand-picked charitable organizations close to their hearts: Five Finger Death Punch chose the Badge of Honor Memorial Foundation. In addition to the $1 donation per ticket, the bands have teamed up with Crowdrise to give fans the option to enter for the chance to win VIP tickets plus a Meet & Greet by choosing to donate an additional $5 at the time of purchase. Fans who don’t live in one of the cities on the tour, but would still like to support the efforts, can visit Crowdrise to donate $5 and be entered for a chance to win a flyaway to the show of their choice plus a Meet & Greet with all four bands.

Says Five Finger Death Punch guitarist Zoltan Bathory about the tours: “I wanted to give you a brilliant quote about trying to keep rock music alive by assembling bills that can sell out arenas where everyone can have the production rock shows deserve, or bringing out new talented bands and expose them to huge crowds… or about rebuilding a community with the help of rock radio, and donating to good causes while we are at it… but we are so busy doing it that I ran out of quotes.”

$1 from each ticket purchased for the Canadian tour dates will be donated to a Wildfire Relief charity soon to be named.

Coinciding with the recent announcement of the two massive Fall tours, Five Finger Death Punch also have plenty of reason to celebrate: after the recent platinum certification of their 2009 album War Is The Answer, and the gold certification of their 2013 album The Wrong Side Of Heaven And The Righteous Side Of Hell, Vol. 1, their current album, Got Your Six just reached gold status this week only 10 months after its September 2015 release.

Five Finger Death Punch have grown exponentially in just a few years, racking up 16 consecutive top 10 hits, five #1 hits, four gold and a platinum album. The band will be taking Got Your Six around the world touring throughout 2017.