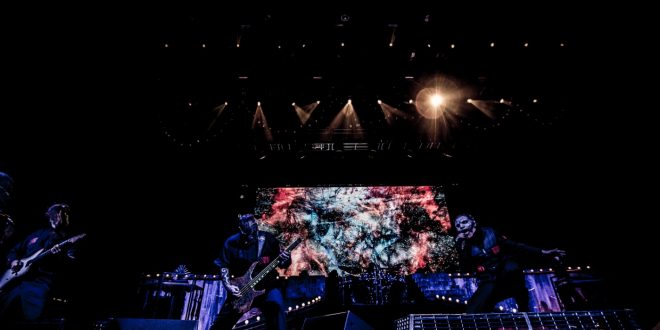 The show WILL continue… !

Neither rain, hail, snow, a recently repaired broken neck, or a hard fall will not keep Slipknot away from performing for their fans.  The band, accompanied by Marilyn Manson and Of Mice and Men, made their return visit Friday, July 1st to the Perfect Vodka Theater in West Palm Beach, Fl.  Regardless if you were a Slipknot veteran seeing them for the fifth time, or if this was your first show, Slipknot put on the same high-level caliber performance that fans have come to love from the band.

For those who were not present when Of Mice and Men hit the stage, I feel sorry for you.  With booming vocals from Austin Carlile, and a cohesive band unity in the group’s sound, the Southern California-based band is a rising force of metal nature. The band came to the stage ferociously and loud putting on a strong opening act that should be commended. The band performed a powerful 8-song set that began with the song “Public Service Announcement,” and continued to perform each song stronger and stronger throughout the set. The crowd was even fortunate to preview one of the band’s new songs,  “Pain,” from their upcoming album, “Cold War,” set to be released in September.  And if you aren’t on the band wagon yet for this band, then some serious time needs to be dedicated to listening to them and getting aboard.

As OMaM had the crowd pumped for MM, and the anticipation of seeing Slipknot was rising, Marilyn Manson performance was a little better than average.  In past performances, Marilyn Manson has put on overdrawn theatrical performances that usually leaves the crown board and disappointed from the musical aspect of the performance. Marilyn Manson though minimized the theatrics and stuck to strictly performing, and started the show with an overall decent musical performance. However, there seemed to be other factors that took part that left some of the crowd wondering what happened.

Halfway through the band’s 10-song set, while performing “mOBSCENCE,” technical difficulties started to take over the performance causing the sound to be skewed. But what looked like a positive turnaround for the band, after performing “The Dope Show,” was only encountered with unusual disappointment.  As the sound improved, Marilyn Manson seemed to be singing either incorrect lyrics to the remaining songs or was just not able to actually finish the songs lyrically.  Could this issue be chalked up to “technical difficulties,” or individual difficulties is hard to determine. What I can say for certain, it was a better than average performance because the stuck to the music, and got rid of the theatrics.

Once Marilyn Manson finished and walked off stage, the anticipation and excitement for Slipknot began among the crowd. Growing concerns and whispers about the band’s frontman, Corey Taylor, was the loudest things that were heard. Considering he had emergency spinal surgery two and a half weeks ago, has been wearing a neck brace while performing, and recently collapsed on stage  after performing in Atlanta—how was he going to be able to handle tonight’s performance? Is he going to be able to perform the entire show? Turns out the old saying, “where there is a WILL, there is a way,” still holds a lot of truth.

As the clock struck nine, Taylor emerged on stage and led his band to another amazing performance. Taylor began the performance, dismissing medical advice for his own personal health and safety I’m assuming, wearing his assigned neck brace and came out blazing with “The Negative One.” From then on out, no worries, concerns, or even a thought crossed anyone’s mind to Taylor’s injuries. Veterans of the band became less worried, and newcomers were now embraced as “friends” to the group.

It was clear to those veterans who had seen the band in the past that Taylor was extremely limited to his actual physical abilities, and even to some of his full vocal range and abilities. Three-quarters through the set, Taylor started to struggle vocally while performing “Left Behind,” and returned to using the neck brace while pushing through the pain.  Aided by other band members, in some of his normal vocal responsibilities, he relentlessly fought through the undeniable pain to meet his “friends” expectations.

This already impressive WILLED performance was even more impressive with the remarkable video and light show production. The disturbingly beautiful video presentation of maggots, sirens, lipo suction, glowing 3-D human skulls, teardrop eyes of morning, and orbital spatial sequences complimented the essence of the bands music. Added with vibrant colors and carefully crafted light combinations illuminated this performance to heights I had not seen before at past shows.

The heavy metal giant finished their encore performance traditionally with having the crowd get down, and explode upright to the finish of “Spit it out,” and still has continued to live up to their concert reputation. Fighting through the unimaginable pain and discomfort, frontman Corey Tailor showed how dedicated, committed, and more importantly how much heart he has for all of his “friends.” So for those other bands out there with members that need a sick day, got a boo-boo, or a headache and can’t perform—take a note. Slipknot is proving that the show can still go on because, “where there is a WILL, there is a way!”

Here are some pictures from the show:

Metal!!! I am never without a camera, I am never without music, I can not live without coffee... I cook, I manage a band (shameless plug Modern Day Outlaw), I shoot people with my camera, and I drink tequila and whiskey... That's me in a nutshell! Follow me on Facebook, Twitter, and Instagram.
@@Melly1172
Previous Album Review: Switchfoot – Where The Light Shines Through
Next Edges issue debut single ‘Walk Away’ 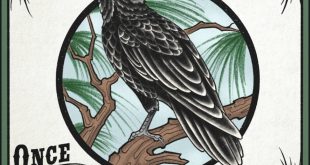