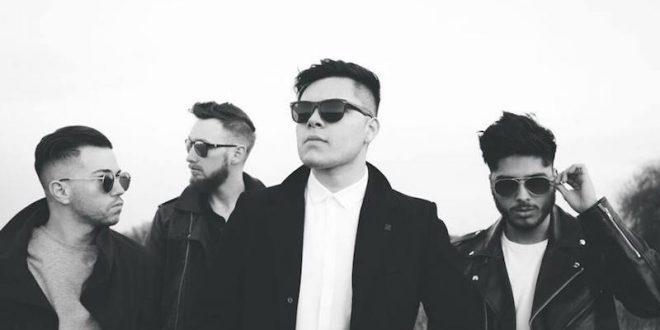 Mayberry is getting ready to release their EP Beautiful Mess on July 22nd, and while that may seem like a long time, rest assured that it worth the wait as the album contains hit after hit.

It all kicks off with the leading single “Wildfire” and right from the start one can see why this was chosen to premiere first. The backbeat of the track keeps the song moving along and will be sure to get many toes tapping. It is completely infectious and by the time the chorus rolls along one can’t help but sing along with it. Lead singer Esteban Rodriguez bursts into his falsetto, holding nothing back as he pounces on the chorus in full attack mode, beaming with energy. “Wildfire” contains all the elements of a perfect pop/rock sound that demands to get mainstream radio airplay. It’s a triumph of a song for Mayberry and perfectly introduces listeners to what kind of high adrenaline pumping music they are in for listening to the rest of the EP.

“On Top of the World” is gritty and powerful in the instrumentals and vocals, as well as the lyrics. Rodriguez turns in a commanding performance forceful, singing “I’m on top of the world/I’ll never come back down” that matches the thumping percussion that drives the song, almost in a military fashion. Again, Mayberry showcases that they know how to churn out relevant radio friendly hits with ease, and its anthem like quality makes it the type of track that will have listeners bopping their head along to. It’s dynamic with the layering of sounds which makes the song unique, and at under three minutes “On Top of the World” shows that Mayberry know how to pack a punch.

Up next, “Say What You Want From Me,” is less energized as the band takes the tempo down a notch into a more midtempo beat, but it’s a welcome change. Rodriguez delivers a nuanced and vulnerable performance on the verses, wondering what he did wrong in a relationship before he breaks into a beautiful falsetto in the chorus. Like most of the album, this tune is very catchy and will be stuck in listeners head long after the first listen. The lyrics are especially good on this track as Rodriguez sings “you make me want to smoke a cigarette.” The chorus is a bit stronger than the verses, but overall the tune is highly addictive, and when it goes into breakdown mode one can’t help but be swept up by the song.

“Coming Home to You” is soft and beautiful and unlike any of the previous tracks. It’s a beautiful and sweet ode to love, Rodriguez utilizing his falsetto voice at just the right moments to tug at the heart strings of the audience. It has an Ingrid Michaelson “The Way I Am,” vibe in both its pure, sugary lyrics and Rodriguez’s vocal delivery. There’s little wonder why this track was chosen to close out the EP because in a sea of melody making power hits this quiet number steals the show.

While most of the album is close to perfect, there are a few missteps which is normal on any EP. “Don’t Be Shy” has a great swagger to it but feels a bit dated and doesn’t quite live up to the rest of the content on the record. “Find My Way” never really finds its voice and after so many star making tunes, the song falls by the wayside.

But if you’re in the market for a record that will energize you and you love top 40 radio, then pick up Beautiful Mess when it is released. You won’t be disappointed.

retro music enthusiast. Dreamer. Kind of odd. Writer
@twitter.com/for_no_one1014
Previous THE FAME RIOT Signs with Another Century Releases Music Video for “Heart Stray”
Next Bat For Lashes’ Album “The Bride” is Out Now!