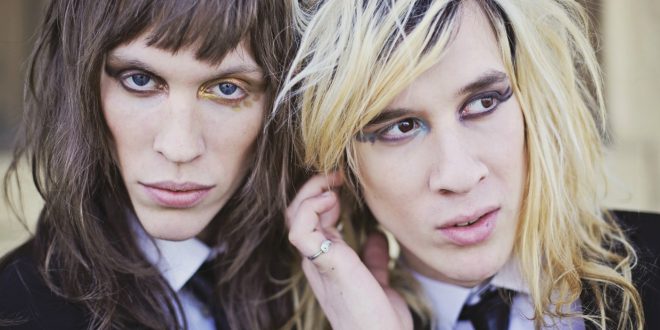 Hailing from Tacoma, WA The Fame Riot features over the top, fabulous brothers, Liz Scarlett and Shazam “Tea Time” Watkins.  Influenced by four decades of rock, pop, electronica, disco, and everything in-between, they are what you would expect if you bottled up the fun and energy of raging summer parties, and threw in some flippant Hollywood glam.  The group is thrilled to announce their signing to Another Century and to celebrate, have released the music video for their infectious single, “Heart Stray.” Filmed throughout parts of Washington state,the colorful video provides a perfect look into The Fame Riot’s addictive, tongue-in-cheek persona.

Century Label Group President Don Robertson states, “I am thrilled to announce we have signed Tacoma, Washington’s The Fame Riot to Another Century. Being from the Northwest and starting my career in the explosion of the Seattle music scene really makes me appreciate how much talent is still to be found back home. Robert Kampf (Century Label Group Global CEO) and I first saw Liz and Shazam in their last band after a friend tipped me off and we instantly saw that these two are hands down stars and we wanted to sign them on the spot but they wanted to continue to develop and find their sound. Fast forward four years and I heard about The Fame Riot. When I found out it was their new band and heard the new songs, we knew we must finally work together! The first single ‘Heart Stray’ is an infectious sing along and the video for it only begins to show the personality these guys have.”

“The Fame Riot is ecstatic to be working closely with this team of true believers,” adds Shazam Watkins. “The Fame Riot and Another Century are spliced together in order to deliver our artistic endeavors into the ears of the unawakened. Another Century hath indeed found the long lost Stradivarius, and our alliance shalt result in a virtuous tsunami of frequency and power, to accelerate our minds into this New Millenia.”