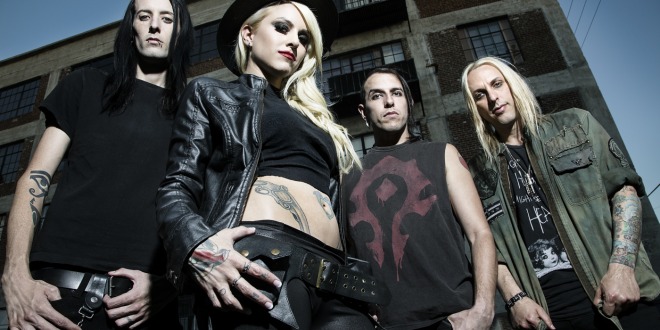 Delivering driving rhythms and anthemic songs that are as unrelenting as they are soulful, is the hard rock band Stitched Up Heart with their debut full-length album, Never Alone. Available now via Another Century Records, these 12 tracks exude confidence and make for a journey of self-awareness and solidarity.

Formed in 2010 in Los Angeles, Stitched Up Heart is comprised of Alecia “Mixi” Demner (vocals), Merritt Alfero (guitar), Randy Mathias (bass), and James Decker (drums). The band, whose name is meant to give people confidence and courage, released their self-titled debut EP in the same year, followed by the 2014 EP Skeleton Key, which has had songs in rotation on over 60 stations. In 2015, Stitched Up Heart signed to Another Century Records, a division of Century Label Group. The group toured extensively, with Warped Tour, SXSW, and over 300 US shows under their belt, sharing the stage with bands like Lacuna Coil, Sick Puppies, and Like A Storm.

Setting the mood for Never Alone is “Finally Free.” This explosive track is a brilliant start to the album, and I’m already beyond impressed with Mixi’s vocal range and control. In this song that mirrors both obsession and freedom of self, the music serves as the detonation to break through the chains.

The beginning of “Monster” gives off the false perception that it’s going to be an easy-going happy number. However, the raging howl “Now don’t you make me, make me go crazy!” makes this song is a dangerous reminder of the monster within. Mixi gives me some strong Maria Brink (In This Moment) vibes with the staggering power in her voice, and it’s easy for me to see why this single is featured on Spotify’s Rock Hard playlist.

“Catch Me When I Fall” features an interesting dynamic with the beat. I’m in love with the lyrics, especially “crashing through the sky like a meteorite.” The imagery within this song is moving and stirs several emotions in me; hope lifted by the soaring background vocals, the pleas during the chorus, and the fatalism in the music. It all comes together as the desire to be saved from my own inertia before it destroys everything in my path.

The klaxon sirens that ring out behind Mixi’s vocals open up “Event Horizon,” which for me conjures a post-apocalyptic wasteland ambiance. It evokes a feeling of impending doom that carries over into the music, which I can only describe as raw, guttural, and powerful.

The simple guitar chords over clear snare beats make “It’s So Easy” such a catchy number, I was compelled to sing along by my third listen. I feel like this song is a big one-fingered salute, where the band illustrates the punctuation in closing the door on negativity and cyclic drama.

“Never Alone” bursts through with a renewed energy, and the whole band comes together as a cohesive unit to create this anthem of solidarity. The song features a blending of synthesizers with hard rock, a trend that I really enjoy as I feel it adds depth and dimension to the music that make tracks like this stand out. However, the cinematic echoing drums and rising background vocals during the bridge are what make this song unique, and I have no doubt that “Never Alone” will resonate throughout the years in the hearts of many.

“Now That You’re Gone” almost takes the album off in a different direction, as the urgent guitars fall away to quiet reflection. This is somber number laments over someone who’s gone away, and the crushing depression that follows. Just as the desperation to feel again threatens to smother me however, the chorus turns back to the album’s overall theme of inner-strength, recalling how I’ve patched up the chinks in my armor after my own broken heart.

In another act of misdirection similar to “Monster,” “Turn You On” has an otherworldly opening that slowly builds up into power-driven guitars. This dominating sexy number is so very thrilling for me to hear as the incredible Mixi just completely owns her sexuality, and I picture whips, chains, and so much leather.

Pulling me back on the emotional rollercoaster is “Bleeding Out.” In this acoustic-backed song featuring clear vocals, Stitched Up Heart reaches right in and twists my heart as Mixi sings about the tragedy of trying to help someone out of an abusive relationship. I can feel the anguish as desperate words of guidance fall on deaf ears.

The dark and seedy tribute to their Los Angeles home, “City Of Angels,” brings back the anger-driven guitars. This gritty, face-in-the-dirt track makes it easy to picture a hellish wasteland with the band standing tall over all the battles they’ve won.

Piano-backed vocals give rise to “I Can’t Breathe” in a soulful way that would make both Lady Gaga and Adele proud. This song has a captivating arrangement in how the guitars intermittently explode from out of nowhere, like a panic attack without any warning or provocation. But just like the end of this track, the anxiety falls away as I break through the storm and I can finally breathe again.

I can’t even begin to express how much I love to hear women in rock conquering their genres. The rise of women in the music industry is a thrilling thing to witness, and as a woman, I feel that this time is long overdue. The ladies have proven that they can rock out just as hard as the guys, and Stitched Up Heart has further driven that point home with the incredibly solid Never Alone. From the unbridled power in “Monster” to the soulful transcendence of “I Can’t Breathe,” this album has the full package. Mixi’s powerful vocals completely dominate, and the music completes each song in a compelling and moving way. I have no doubt that this year marks an exciting point for Stitched Up Heart’s rise to universal conquest. Be sure to pick up Never Alone via iTunes, Google Play, Amazon, PledgeMusic, at Best Buy and FYE stores, or stream it via Spotify.

Previous Interview: Kiliyan Maguire from Charming Liars at The Bowery Ballroom in NYC on 05/22/2016
Next RIHANNA and COLDPLAY to Headline “BUDWEISER MADE IN AMERICA” Festival 2016