Home / Interview / Interview: Kiliyan Maguire from Charming Liars at The Bowery Ballroom in NYC on 05/22/2016 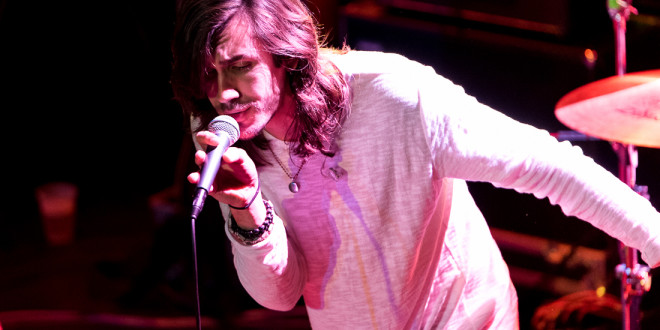 Interview: Kiliyan Maguire from Charming Liars at The Bowery Ballroom in NYC on 05/22/2016

After what seemed like a journey of obstacles through New York City’s own version of Legends of the Hidden Temple (aka the subway when certain lines aren’t running,) I found myself finally arriving at The Bowery Ballroom where I was greeted at the door by Kiliyan Maguire. Lead singer of the alternative rock band, Charming Liars and self proclaimed fourth Franco brother according to his instagram. The California native joined Charming Liars after their previous vocalist had parted ways, around the same time Mad Temple, Kiliyan’s previous band, also disbanded.       Charming Liars has recently released their EP, 12:31 featuring six funk-filled and groovy songs. Most recently the band was the opening act for Night Riots and Blaqk Audio on The Material Tour throughout various cities in the country. On this interview Kiliyan describes the demands of being on tour, the attributes of 12:31, and the influences that made him want to become a singer.

ME: Before I go any further, I need to congratulate you on the latest EP and on receiving your diploma. I was really happy about that.

KM: Ohhh!! Thank you so much! Yeah, thank you about that!

ME: Being a touring musician and a student simultaneously must be pretty difficult, how did you manage to do both?

KM: Well I was attending Musicians Institute. I attended for about, off and on, two or three years. I went for about a full year and then I took some time off to do some touring. Which is great about schools, they allow you take time off. That’s what you’re supposed to be doing right, touring? (Laughs). So finally, wrapped up an
awesome chapter there and got the diploma, really excited about that.

ME: Any advice to other prospective musicians seeking to do the same?

KM: Yeah! Just go out and do it. I mean if you’re planning on going to school for music and touring, it helps to get you started. It really helped me get my foot in the door. But, there’s obviously many different ways to kinda do it, you know?

ME: Mastering how to juggle between responsibilities.

ME: You recently joined Charming Liars as the lead vocalist, what was the transition like?

KM: It’s exciting. I’ve been in bands since before I could remember, you know? So joining up with these guys was an exciting transition. Before I was doing some touring but nothing too crazy. With this group, we’ve been all over the place which I love. I think for some musicians, they’re kind of content with maybe not doing the touring and just making the music. You just got some people that maybe it’s not for them. Getting to your hotel at 4 AM and lucky if you get a hotel and then getting up for 9 AM lobby call for the next city. It doesn’t sound appealing to a lot of people. And that’s just one little piece of the whole. You do that and then you show up, set up, play for 45 minutes and it’s the greatest thing ever. Then you go to bed fulfilled and you do it all over again.

ME: Honestly it sounds intense but so rewarding at the same time.

KM: It’s a badge of honor! Since I was a kid, it’s what I wanted to do. You’ll never catch me complaining.

ME: How have fans adjusted to the lineup change?

KM: I thin
k very good. They’ve adjusted very well. On this tour we’ve made a lot of new fans.

KM: (Laughs) Thanks! A lot of the older fans they’ve either embraced it with open arms or have gone their own way. But I think for the most part everyone’s been really receptive to the new material.

ME: If you had to expose someone to your music, which song would you choose and why?

KM: That’s tough. That’s a good question, very good question. I think I would probably go with ‘Soul’. That’s why we decided that for the single that would be the one. Why? I feel that the song, at least for me writing it, I feel like I don’t have any ownership to that song. After we wrote it, it kind of took on a life of its own. I feel that that song evokes a lot of emotion. It’s definitely ambiguous enough where a lot of people could relate, and it doesn’t really matter on your background. It’s something that everybody goes through.

ME: What were the creative influences for 12:31?

KM: 12:31, I listen to a little bit of everything, I know it’s a very stock answer. People say it all the time but for that EP, I’m very lyrically based. I believe a song is only as strong as its lyrics. You can have some pretty catchy songs that maybe don’t have much depth but, I really wanted to make sure for me–growing up on guys like Jackson Browne and Third Eye Blind, who were some of my big influences, and they’re just so lyrical. I really wanted to make sure I spent a lot of time painting a very vivid picture, lyrically. The inspirations are kind of spread all over the place. A little bit of everything.

ME: Will fans be getting a full length album later on this year

KM: I want to say I hope so. We’re already working on some new music, right before we left for the road. When we got done with 12:31 we were excited and then this tour came up and we said “Alright, let’s go do it.” I think what we want to do is see how this EP is being received. If 12:31 is being accepted with welcoming arms there’s definitely no reason why we wouldn’t complete it. With six songs on it, add another five or six songs on it for an ideal record. When will it be, I don’t know, which is exciting in some ways but also kind of anxiety filled.

KM: It’s actually a reference to the song ‘Soul’. The first lyric is 12:31 and it kind of fit in really well with that record because it wrote itself that way, a nocturnal record. I’d like to think that every song on it, is like a different story happening at the same time just in different places. 12:31 AM you have ‘Outta of My Head’ which is a song that’s kind of about you know, those toxic relationships that you can’t let go of. I think we’ve all been to enough nightclubs and things like that to have seen tons of people in toxic relationships. We have ‘Wild’ which is more of the physical connection at that time, 12:31. So yeah it’s the first lyric in the song but it’s also a nocturnal record so we thought it’s that time you’re either in it or you’re not.

ME: After having seen your performance last night in D.C., I can definitely see why half of your band’s name is ‘Charming’, but why Liars?

KM: Well the band name and I hope I’m telling it right ‘cause Mike [Kruger, bassist]  is usually the guy who answers this question. Basically what happened was, right after the band had gotten signed, drinks were being had, everybody’s having a good time and Mike wanted to get out of paying the bill. So he started talking to the barmaid there and she thought that they were faking their accents and she called them a bunch of charming liars. The name they thought sounded cool and it kinda stuck. It worked.

ME: Being based out of England and California has got to bring in a lot of different musical influences.

ME: Who were your biggest influences in deciding on becoming a musician?

KM: Well growing up in the early 90’s The Black Album was always on the radio, Use Your Illusion records were always on. There was this influx of grunge bands too that were massive, such as Nirvana, Smashing Pumpkins all these guys. So growing up I was surrounded by really cool bands, sitting in the backseat like a sponge taking it in all the time. Then I had my grandparents who listened to a lot of classical and jazz, actually a lot of Mexican music since I’m half Mexican. I was surrounded by music always. When I hit about 14 years of age I went to see Van Halen with David Lee Roth, that was one of my first concerts. I always wanted to be in a band, just had to figure out if I wanted to play guitar or sing then when I saw David Lee Roth, “I wanna be THAT guy.” I wanted to be a singer, that was the cool thing about it, that’s kinda of where it came from.

ME: Does Kiliyan, the Fourth Franco get nervous before getting on stage?

KM: I think everybody gets nervous in their own way before they play. I always think of Bruce Springsteen, I watched interviews with him and he gets nervous and he’s played a million shows. Everybody does but, the way he internalizes it, he takes it as excitement. Other people say it’s stage fright and they’re terrified. You gotta be crazy to say “I don’t get nervous.” It’s just about how you take it. Is it going to empower you or take you down, just like anything.

ME: As a music fan, who would you list as your ideal lineup?

ME: What has been the overall sentiment on this tour with Blaqk Audio and Night Riots?

KM: Overjoyed. Excited. Everyday each band shows up tired from the drive of the night before. We’ll get up there and not one of these guys is ever low energy.

ME: Last question, any shout outs?

KM: Man, I’ve gotten that question before and it’s always a tough one.

ME: Say hello to your brothers.

KM: (Laughs) Yeah! Shout out to my Franco brothers, thanks for being the best big brothers. No, no I just want to give a big thank you to everybody, the crew, to the other bands and to the people who came out early to catch all of the bands. That really means alot to us, ‘cause you know we’re driving these crazy hours and you never know what you’re gonna get. The crowd might not be there until the headliner goes on. It’s just the risk you run when you’re the opening band. But every night it’s been a very good crowd. So the bands and the people.

Make sure to check out Charming Liars at the links below.