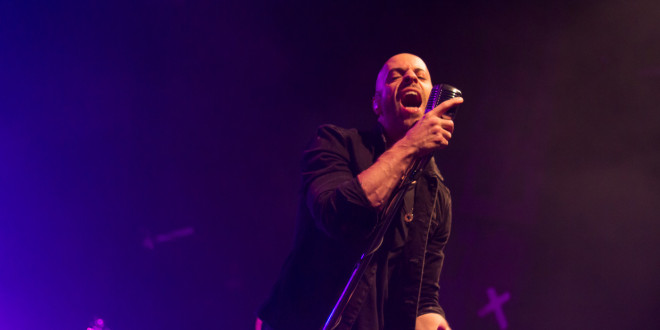 Interview: Chris Daughtry in Manchester 22 May 2016

Daughtry is an American rock band formed and fronted by namesake Chris Daughtry, who was a finalist on the fifth season of American Idol. Their self-titled debut album was released in November 2006. This album reached number one on the Billboard 200, went on to sell more than four million copies in the United States, and has been certified quadruple platinum by the RIAA.

To date, Daughtry has sold over 8 million albums and over 22.6 million digital tracks in the U.S.A. Greatest hits album, It’s Not Over…The Hits So Far, was released in February 12, 2016, with singles from their studio albums and two new songs. On January 29, 2016, “Torches” was released as the lead single. The band made a fleeting visit to the UK in May 2016 playing just a handful of shows. I had the opportunity to catch up with Daughtry in Manchester.

Music Existence: Last night in Birmingham was the first night of the tour -how did that go?
Chris: We got in pretty late from the night before. It was great, awesome. Sold out great crowd, we played good. All the right things.

ME: Daughtry have a just released a Greatest hits compilation. For many bands that would mark the closing of a chapter. Is that the same for Daughtry? Or does it signify a beginning?
Chris: I guess that I could see it that way. After four albums you could always look at it as a bookmark into the next chapter. Yeah, it just felt like it was ten years since Idol, ten years since the first record and as part of the contract with the label you put out a Greatest hits anyway. So we were thinking that it would be a good time to work on the fifth record and take a break to really evaluate where we are going on this next record and that was kind of a nice intermission, if you will.

ME: There are also two new songs on there. Can we therefore expect a new Daughtry record sooner rather than later?
Chris: I mean, we are working on it. We are in the writing process right now. We are not sure if it’s coming out this year, or next. We definitely hope to have a single out before the end of the year.

ME: Your songs tend to fall into two types. On one hand there is the mellow country acoustic stuff like “Tennessee Line.” Other songs fall firmly into solid rock-like “What I Want.” What inspires you to create two very different sounds and musical styles?

Chris: Just being in a band and music in general. Being a fan of music and being a fan of good melodies and storytelling. I don’t necessarily feel like it always has to be some kind of bombastic rock song to be a great song. Sometimes it calls for it and sometimes it doesn’t. When you look at bands like U2, or hell even Prince they never did the same thing over and over. It was never like ‘it has to be this or it’s not Prince or it’s not U2 if I don’t hear this guitar.’ I feel like a lot of people get caught up in what they think you are as opposed to just going along for the ride.”

ME: Baptized your last release did mark a significant departure from Daughtry’s previous releases. In terms of style and sound.
Chris: Yeah and that was a little bit of experimenting going on as well. Being a fan of pop music and wanting to figure out a place to fuse that into what we do. In hindsight, it was probably a bit one-sided. I think this next record is certainly going to be much more of a rock record than Baptized.

ME: Does the process of songwriting become easier for you personally or is it more difficult to find sources of inspiration?
Chris: I think that it becomes more difficult. Yeah for me, I tend to try to stay away from anything that feels like I have done it before. After four records you start running out of things that you haven’t done. So it becomes a little more challenging, but almost in a cool way because it almost forces you to be a better writer.

ME: If you were stranded on a desert island and you could only take one album by yourself and one from another artist-what would those be?
Chris: (laugh) Ahh let’s see… I would have to go with Break the Spell and… Man it used to be Throwing Copper from Live but I think if I was stranded, I would need something to sleep to X&Y by Coldplay would be a good album.

ME: If you had not become a professional musician, what alternative career path would you have taken? You have done acting, drawn comic books.
Chris: That was all backdoor from music so I think that any of those things would have been acceptable had I walked through those doors but the fact is that I hadn’t at that time. I’m thinking that if I hadn’t gone on American Idol and I wasn’t a musician right now, I would probably be doing gigs on the weekend and still trying to work a day job to pay bills. It’s hard to even say it. I try not to think about it because it puts me in a depressing mood… (laughs) everywhere I’m at.

ME: Regarding the acting that I mentioned earlier. You recently played Judas in “The Passion.” How was that experience?Was it a new challenge to you?
Chris: No, because I wanted to be an actor from when I was a five years old. It was kind of my first love, way before picking up guitar. That and comic art were the two things that I wanted to do first. Certainly I want to do more of it. Trying to find the time and do a new album…

ME: I was just going to say,is it something that you have planned to dip into and continue side by side with the music schedules permitting?
Chris: I guess it would have to depend on the role and how great of an opportunity it was and how much I would have to take off from one or the other.

ME: It would need to be a good role.
Chris: I mean Jared Leto seems to be able to do it pretty seamlessly. Who knows? We’ll see.

ME: Regarding the comic book art-you have designed the cover of a Batman issue. That must have given you a huge sense of achievement?
Chris: That is something that will definitely come few and far between because it takes me so damn long to get a cover finished. I don’t do it as much.

ME: You don’t draw when you are on those long travel trips while on tour then?
Chris: I have stuff and if I am in the mood I will break out that iPad and start sketching around with it. Yeah, I really have to be in the mood to do it. It’s when you stop writing songs for a while and then get back in the swing of it. I do love it.

ME: It must have given you a massive buzz to do that cover?
Chris: Aww huge.

ME: Assume that you will have a framed copy of that up in your home?
Chris: Yeah I definitely want to get the framed version.

ME: You have done many musical collaborations with artists from a variety of musical genres. Who would you still like to work with?
Chris: Well Prince was at the top of my list for years but … gosh… I mean Halsey. Ever heard of her?

ME: Not yet.
Chris: Look her up-I would like to work with her.

ME: Musician, comic book artist and actor-you are certainly multi-talented. What are you not good at?
Chris: (laughs) Sports, I am athletic-that is as far as my sports skills go. I can run fast, and physically do the tasks. It is the whole running plays, catching the ball and shooting hoops that apparently you have to be good at.

ME: This question may sound like a strange one but here goes. I read that you shaved your head because you had some difficulty in coming to terms with losing your hair. I also personally have some insecurity issues with this. I am thinking of shaving it off. In hindsight was that a good decision to go down that route?
Chris: Oh yeah,it was either this or being very unhappy with the way things are going. I still get hair envy. I see some dudes and I am like “shit if I had hair I would do that. But it is what it is. Luckily I don’t have any weird birthmarks or anything going on that surprises.

ME: Returning to the current tour. Why is it only a few dates, obviously there was an extra Glasgow date added.
Chris: I am not exactly sure, we don’t book our own tours. We did have an opportunity to come to do five shows in the UK,via the promoter. It was either that or we wait until we do a proper full tour. We wanted to get back sooner rather than later.

ME: When we last spoke back in March 2014 at the hotel in Belfast (you probably don’t remember).
Chris: Yes, sure I do.

ME: Just wondered what had been the personal highs and lows since that time-around the time of Baptized.
Chris: I think one of the biggest highlights in my entire career, was doing the cover for Batman number fifty. Probably one of the things that made me the least amount of money and gave me the most pride. Lows? I don’t really know of any. I feel that this year has been one big, new experience after another. Very exciting stuff with the acting and the artwork. Things that aren’t necessarily music related that I have had passion for. No pun intended since I was a little kid, just being able to accomplish those things on that level was a huge accomplishment for me. Now working on the new music which is really exciting because it definitely feels fresh and we are excited about it. I am not really sure when we are going to grace the earholes with the first single (laughs) but we are kind of under the gun right now.

ME: Obviously a band’s touring schedule is planned and mapped out well in advance. Will you be including anywhere that you will be playing for the first time. Any countries in particular that you are especially looking forward to hitting?
Chris: We haven’t got any touring plans yet, after the record. I would love to go to Brazil, I haven’t been to Brazil. Trying to think of some other places that we have not played. South America in general because we haven’t had a chance to go over there. It would be nice to do a full on South American Tour.

ME: Chris, that’s great, thanks again for chatting to me.
Chris: Awesome, good to see you again.