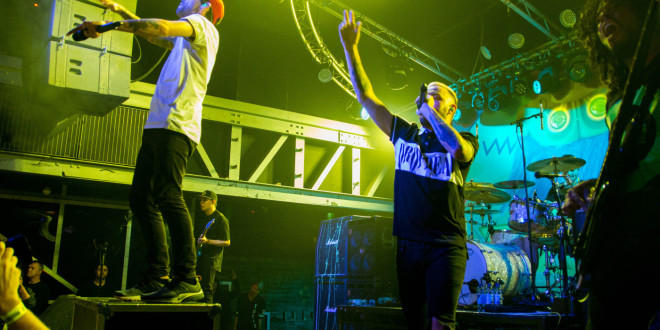 Asteroid Boys were… Interesting. I honestly don’t think they’d be a band I’d ever choose to see but there’s no denying the welsh boys had more than a few fans in the crowd who were pretty damn rowdy, with pits opening up all over the place, fans just going absolutely mental. They had a talent for rapping and the heavy, dirty beats behind them added to face paced sick performance. What I found really cool was they basically had a DJ on stage with a big fan made Scotland flag across his decks and they even specially thanked the fan that made them it.

I had an instant rumble in my chest when Hacktivist kicked in. They were instantly showing off their incredible high energy and incredible musical skill. Again another band that I may not to choose to see myself but good god did they deliver one hell of a show. There were crowd surfers patrolling over the crowd left right and centre. Their self title tune Hacktivist really got a reaction out crowd. More pits starting again, the back of The Garage

basically turning into a massive mosh pit. A cover of Kanye West’s Ni**as In Paris sent the crowd into uproar, the whole place bouncing. I could feel the floor bounce with the sheer amount of jumping. The clean vocals with the perfect mix of screams was amazing. The screams were the same Style as Crown The Empire which gave them a really great touch.

An issues crowd is one of the most diverse crowds I’ve ever witnessed. From young teenage girls to older guys it was amazing to see everyone singing the words of COMA back to them. The level of energy on that stage set the bar for any other band I have ever watched. Every single member had a part to play in keeping the crowd on their toes. Issues for me are the perfect mix of everything I love musically, Michael’s screams were everything and the cleans from Tyler were phenomenal. They are musically sound and aesthetically pleasing to watch preform with a great lighting show and high energy jumping about.

Never Lose Your Flamesr Flames brought my old Scene kid days with my big fringe and wanting to he meaningful lyrics tattooed all over my body.

I think this song may be all up beat and buzzing but it holds a pretty incredible message. As do a lot of issues songs old and new. When speaking to band before hand about creativity when writing they said that everyone makes a massive contribution musically and it’s very clear. When Tyler requested that everyone put their devil horns up for life of 9 and said “are you ready for a heavy one?” You could practically hear a collective yes from the crowd as they launched themselves into another, wild and crazy moshpit. But the pieced resistance was their fucking insane encore and that’s the only way I could describe it was sheer insanity. Performing the songs Mad at Myself And Hooligans Just made for a absolute crazy end to the show. Tyler just proved that he can constantly up keep a crowd and make sure they stay hyped throughout the whole show. I think the boys in issues have mastered the preforming love game and if you ever have the opportunity to see Issues get yourselves along and just rock out.

19 Years old from Glasgow Scotland, currently studying Radio at City of Glasgow College in conjunction with my own Youtube Channel!
@johnhughxs
Previous Gallery: Issues, Glasgow Garage, 27.05.16
Next Interview with Pryti