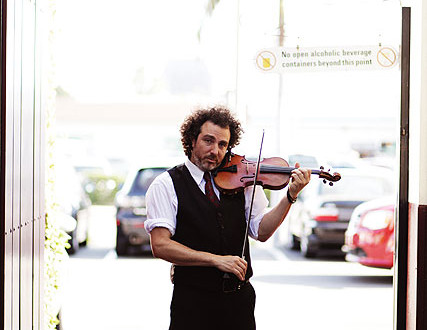 Session players never get as much credit as they should. Nor many chances to stand in the spotlight. They are viewed as role players, handsomely compensated for their contributions, sometimes remarked upon, but usually glossed over in favor of the marquee name that brings the bucks in. Chris Murphy has carved out a twenty five year plus career as a solo artist and contributor to albums from countless figures – Mike Watt, Nels Cline, Pat D’Arcy, and L. Shankar are among the luminaries who have drafted Murphy and his violin to further fill out the songs. His solo work, however, stands as a singular expression of his creative spirit free from the constraints of fulfilling another artist’s vision. Fourteen releases have born his name above the title and the latest, Surface to Air, is another formidable collection showing off his talents as a player and writer.

Surface to Air starts off with “Sailing the World Alone”, a mid-tempo country track with Murphy’s outstanding violin leading the proceedings. The surrounding musicians are quite a capable cast, however, particularly the uncluttered percussion that gives the song a solid base from which it can grow. Murphy’s vocal talents will never supersede his instrumental prowess, but it would be a mistake to underestimate his effectiveness as a singer. The lyrics on Surface to Air, as they are on earlier Murphy efforts, range from solid to truly excellent and he’s an aurally appealing vehicle. “That Just Might Do the Trick” is another nod to the country genre, this time a few steps removed from outright honkytonk or, perhaps more accurately, western swing. The track certainly sways – once again, the straightforward nature of the track, particularly the percussion, gives it immense likability. Murphy switches gears for the album’s title track. This is a groove fixated effort that hooks into its path early on and rides it steady until it ends. It’s also a tremendously thoughtful, reflective song and Murphy’s sensitive vocal vividly captures that quality.

Murphy shifts things up again on “Dead Weight”, a rollicking country rock track with a tough minded, charging style that doesn’t know a lower gear. The song is a bit shorter than most on Surface to Air and that, likewise, suggest a much more stripped back purpose than elsewhere. “Last of the Twickham Blackbirds” is riff-centered, much like “Dead Weight”, but the new song relies much more on acoustic guitar and the lyrics frame a narrative rather than a series of emotional impressions. Murphy’s vocal versatility is apparent – he’s equally comfortable tackling material like this as he is earlier songs like “Dead Weight”. The late instrumental “Bugulusa Blues” focuses, as the title shows, more on its blues influence than anything else, but Murphy can’t resist twisting the genre’s formulas in unexpected ways. The album’s instrumentals, in some ways, shine much brighter than the lyric tracks thanks to the freedom a strictly musical approach seems to offer Murphy. The risks in a performance like this, however small, would demand a rethink if the track had a lyric and vocal melody to contend with.

Another instrumental closes the album. Murphy could have scarcely chosen a better song than “The Hunter & the Fox” to close the album as it serves, in a purely suggestive way, as a statement of purpose. While Murphy’s material might often indulge modern forms, his music, at its deepest core, comes from a place out of time. Murphy is chasing ghosts and the resulting sound is glorious on this concluding cut. Surface to Air ranks among the year’s best releases in the roots/Americana area and, surely, Murphy’s vast experience and clear-eyed musical vision are key factors in its quality.