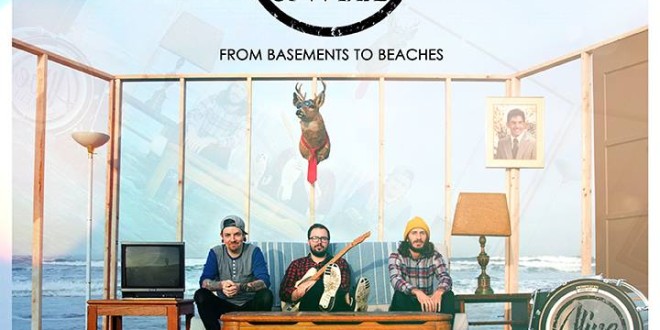 Serving as a blast to the past with sounds similar to early The Wonder Years (think Get Stoked on It!) and early “I-hate-this-town” vibes from Fall Out Boy (think Take This to Your Grave), Alive & Well are definitely a band to keep a look out for in the current music scene.

Interestingly enough, Alive & Well started off as an acoustic project but now find themselves dwelling in the emo/pop-punk spectrum. Their sophomore release, From Basements to Beaches, will be released on June 3 and will undoubtedly steal the hearts of many. The 4-song EP was engineered by Beau Burchell, whom has worked with Saosin and other acts such as Kosmos Express and Open Hand.

The first track on the EP, “Transplant Rejection,” is an energetic intro, setting the mood for the rest of the EP. This track in particular is very reminiscent of early The Wonder Years. “No Winter In The West” follows, dishing out clever lyrics that manage to portray emotions without over-saturating the actual track. It comes as no surprise that this track in particular is one of the band’s hit singles. The last two tracks, “Addictions” and “259 Park Drive” serve as great conclusions to the EP, leaving listeners wanting more.

“259 Park Drive” in particular truly steals the hearts of listeners, reminding them of either their past or current emo days with lyrics such as “…my friends and I are not for everyone, we do things differently than most.”

Overall, the EP’s general message about having a positive and determined attitude about your life is well-needed at a time like this where the world seems to be crumbling apart. As lead singer Matt Vernon explains, “Bad things will happen, you’ll have to encounter heartbreak, death, and tragedy and you’ll have to move through it.”