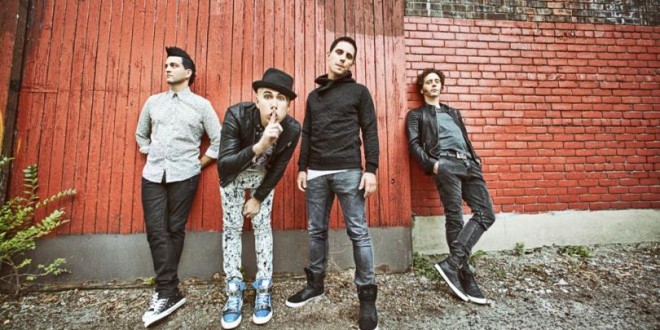 Multi-Platinum selling Canadian pop-rockers Marianas Trench have announced a summer headlining tour in the U.S., SPF 80s, which kicks off on July 8th in Oklahoma City, OK at the Diamond Ballroom. Presale tickets and VIP packages will be available starting on Thursday, May 19th at 10am local time. General admission tickets will go on sale to the public on Friday, May 20th at 10am local time. Go to marianastrench.net for more info and to purchase tickets.

The tour is in support of their newly released fourth studio album Astoria which echoes one part 1980’s fantasy adventure film and one part classic Marianas Trench. It honors classic coming of age stories, and reflects on front man Josh Ramsay’s own personal journey that took him from the highest high to the darkest point in his life and career. “This album is about completely falling to pieces, and picking yourself back up again,” Josh explains. “We took the hardest two years of my life and made it into something beautiful, and our best work to date.”

Excited to be performing in the U.S. again this summer, Marianas Trench enthuses, “America, we’re back. Grab your sunscreen, super soaker, and speedo ‘cuz things are about to get HOT. The Marianas Trench SPF 80s tour is coming to a city near you this summer and David Hasselhoff says, “You definitely don’t want to miss it!”

Since their 2006 debut album Fix Me, Marianas Trench have had two Certified Platinum albums in Canada (Masterpiece Theatre and Ever After) and many chart-topping hits including “Fallout,” “Haven’t Had Enough” and “Stutter.” In 2013, the band earned a JUNO Award for Group of the Year, adding that accomplishment to their multiple MuchMusic Video Awards. Ramsay also received a Grammy nomination in 2013 for co-writing and producing Carly Rae Jepsen’s breakthrough smash “Call Me Maybe.”

Below is a full list of tour dates for Marianas Trench’s SPF 80s tour. General admission tickets will go on sale to the general public on Friday, May 20th at 10AM local time