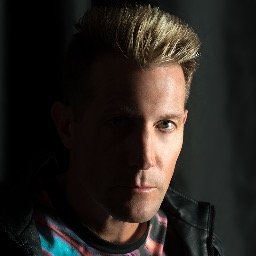 Originally from Northern California, Cavier (pronounced “cav-AIR”) has been based in Phoenix, AZ for several years and up until recently was performing as Alan Clark in atmospheric pop duo EyeTalk. Over the course of ten years and five albums, this venture saw Cavier’s music reach audiences as far-flung as Italy, the UK, and Australia. After five albums and hundreds of shows played throughout the US, Jonathan Cavier has reimagined himself and has formed a new musical identity on his debut solo album Premier. In addition to his musical endeavors, Cavier is a semi-professional tennis player and a member of the USTA and IFT. Cavier says that practicing and playing in tournaments is like “the fountain of youth.”

“January” is the first single from Premier, Cavier’s debut solo album. The twelve songs on Premiere merge his varied pop and rock influences from the 80s and today, resulting in a fresh take on pop music. And it’s a refreshing single coming from him without the second half of EyeTalk to be heard. But it doesn’t really veer too far from that sound really, although there might be a hint in the lyrics that it’s trying to. It also gives no such thing, as it appears much more to be about a romantic relationship. But all the more, opinions can vary, because it is by no means a song that is restricted to that. It’s just that the theme is strongly laced in breaking away from something or another and starting over, either again or with someone or something else.

It’s pretty based in a new wave style, ala Bowie and romantic bands of the 80s, but maybe it should make a comeback amongst all of this Americana and folk music going around these days. It sure reminded me when the song started, of bands that didn’t stick to the regular pop formula in those days, and took it more club pop. It seems to be a scene that is now dead and gone, replaced by the hip-hop and now EDM crowd. But not to confuse it with electronica, it’s just what the clubs are playing, while this is definitely more organic and even radio accessible pop. But it would’ve gone down very well on MTV back in the day, just as much as it is good modern pop music on the other hand. And you can still dance to it, as it isn’t of the harder rock variety.

In which something tells me Cavier himself is not too heavy handed of a musician, but does write a good song. You might like the way this flows like silk in all departments, and delivers a likeable tune. It has everything from acoustic guitar and string arrangements to a beefy base line and everything. These things do tell me he can rock harder but it’s a delicate number, so also proves otherwise. I’ll just have to accept that he’s a soft rock and pop artist and leave it at that. But not being the biggest pop fan in the world, I do like him on this solo single. It starts and ends well, and keeps you tapping your toe throughout, which is the mark of any good track, single or not. It’s a good piece of music to sing over, and he has a fine sort of crooner voice.

To this reviewer it beats a lot of the country pop and other flavors of the day, but it does have that throwback appeal I was talking about. It’s somewhere in-between that and adult contemporary. I think that is my best call on it, besides the fact that I didn’t turn this off for several repeats, so it worked in keeping my attention to see plenty in the artist, and dig my ears into the song which comes recommended for all of the above. Especially if you like love songs. But also for its stripped back and straight ahead approach. These are all good qualities that have the making for a hit single, which is always a hit and miss target, but I don’t see Cavier far off the mark, if at all on this first solo single effort.