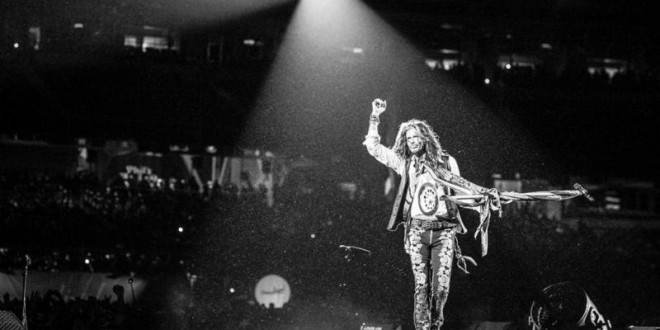 When the producers of LaconiaFest set out to create the most iconic music experience of all time in New Hampshire, they had one name on the list. Steven Tyler. Today, LaconiaFest announced that legendary music icon Steven Tyler is set to perform on the main stage of the motorcycle music festival on June 15, 2016. Tyler will take the stage at LaconiaFest backed by his Nashville-based band, Loving Mary.

A beloved staple in New Hampshire, Tyler has a longtime connection to the area. In addition to spending his childhood summers in Lake Sunapee, it is where he met the members of the Joe Perry Jam Band, which later evolved into Aerosmith.

One of music’s most recognizable and dynamic performers, Tyler has been cited by Rolling Stone as “one of the greatest singers of all time.” Tyler and Aerosmith have sold more than 150 million records worldwide and he has won four GRAMMY® Awards, six American Music Awards, four Billboard Music Awards and an Emmy® Award. Tyler is currently working on his highly-anticipated solo album that is scheduled to be released this summer on Big Machine Label Group’s Dot Records. His critically-acclaimed single, “RED, WHITE, & YOU” is available now.

Tyler also has a love for motorcycles, making him a natural fit for the festival.  In September 2007, Tyler launched a line of custom motorcycles, now named Dirico Motorcycles, and is a co-founder and partner of the motorcycle brand.

“We couldn’t be more proud of Steven Tyler‘s homecoming to the state of New Hampshire forLaconiaFest,” says Tyler Glover, co-producer of LaconiaFest. “Fans in this area grew up listening to Tyler’s iconic voice several times a day on the radio, and they are even more eager to see him perform in person.”

Tickets for the June 15th Steven Tyler show will be announced and go on sale soon viawww.laconiafest.com.

LaconiaFest Ticket Information:
Tickets for four of the nine LaconiaFest concert dates are on sale now, giving you access to over 50 performing artists – with more to come during the remaining five dates! LaconiaFest VIP Pit and VIP Tower tickets will be available for purchase within the coming weeks, delivering next level festival status including the best views, expedited entry and VIP perks to be announced soon. All General Admission, VIP Tower and VIP Pit tickets include “all-day” in and out access to the LaconiaFest attractions and facilities for that day.

GA ticket prices range from $30 to $70, and VIP PIT and VIP Tickets start at $100. Get your tickets now via www.LaconiaFest.com or www.TicketGalaxy.com and stay tuned for more information on tickets for the remaining five dates, coming soon!