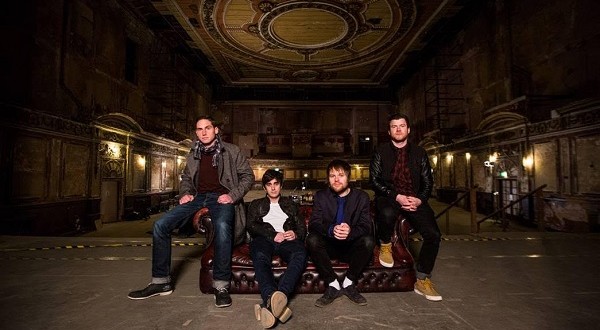 Chris Batten of Enter Shikari was nice enough to give us his time. We discuss their current US tour, the re-release of their latest album, their rise to fame, influences in so much more in this interview.

ME: Let’s start this interview off by asking, how you doing, I know that you guys are promoting a spring tour that’s happening soon. Are you getting excited for it?
CB: Yeah, we’re ready. We fly out Thursday morning. It’s our last day at home. The batteries are recharged and we are ready to do this.

ME: Correct me if I’m wrong, but you guys usually tour the US about this time almost every year, is that right?
CB: (Laughs) I don’t think that that’s anything that we’ve planned to go to America that time ever year. I think it’s just something that happens.

ME: I know that you guys are doing a lot more festivals and having more of a festival run here in the states, have you guys done a lot more festivals in the US other than warped?
CB: I mean we’ve done a lot of festivals overseas in the UK and all around Europe. I think it’s more common for these types of summer festivals. We get a lot of festivals that will last three or four days. People camp out and that kind of thing. So, we are quite used to it and it’s something that we love doing.

ME: Well let me ask you this, you guys have done a ton of concerts. Do you enjoy the more energetic atmosphere of a festival or do you enjoy more of the intimate and sweaty venues?
CB: It’s tough, I think each have their positives. Obviously, when you’re playing in a sweaty club venue and everyone is there to see you, knows who you are. There is something special about that, but as well there is something about playing outside looking at the sky and being at a festival that you just can’t beat. If you’re one that loves to listen to music, at a festival music is playing all around you so it’s a wonderful place to be.

ME: Let’s talk about the music for a bit. You guys, last year, released The Mindsweep: Hosptialized. What was the reasoning about re-releasing that album?
CB: Hospital Records is a drum and bass label that we have been massive fans of for ages. We first got in contact with them when some of their artists remixed some of the songs off of our second album. We’ve just kind of always kept in touch. It came about that we’d give the album to Hospital records and we’d have a different one of their artist remix a different song on the album. We’d thought we’d re-release is as a separate piece of work and a completely different album. That really excited us, not just because we love all the artists, but we thought it was a pretty original idea. It’s pretty exciting for us as a band to work so hard on The Mindsweep to have other musicians and artist come take a stab at moving it in a different direction. Obviously, we are big fans of the label and pretty much all of the artist on the label. We were more than happy to give them a show and see what they could do.

ME: You guys have always done a great job at evolving but keeping your sound. You guys put so much music into your work and you can tell that you guys have taken your time on it. Do you guys just take all your musical influences and just put them together and see what comes out? There is so much music in your songs and you can tell that you work really hard on it.
CB: Thank you! Yes, we try not to hesitate when it comes to making music. I think that is the main thing that we have learned. You know, you write your fist album and that’s a combination of songs that you have written over three or four years. When you write your second album in a rehearsal room, you have to be like, “okay, we have to make some new songs from scratch”. It’s an interesting experience. I think something we learned on the second and third is to push ourselves outside of our comfort zone and to write music that is fresh and not be afraid to take influence from anywhere. Don’t be afraid to try different instrumentation or to not cater to what people expect you to do. I think by realizing that and not being afraid to go outside our comfort zones and to not be scared of what people expect has allowed us to write music that is more interesting and excited. I think that’s the main base of our focus when writing music is to just keep it fresh to ourselves and hope people like what we’re doing.

ME: Let’s talk about your personally for a second. You play a big part in the music and you put a lot of your influence into the song. When you were growing up and jamming to music, what did you like?
CB: Me, Rou, and Rob have known each other since we were five years old going to the same primary school (what we call it over here). So, at a very young age we were kind of like singing and messing around together. We started learning guitar together and things like that at about 10 or 11. We were brought up on The Beatles, we are massive Beatles fans. In that time period there was also the Brit-Pop scene which included stuff like Oasis, Blur, and had amazing guitar and it was decent pop music being made. It was very inspiring. It started out as a hobby where we were just playing covers. We always say that this is a hobby that got really out of hand. So, once we played covers and did a couple of gigs as a cover band, we would start throwing a few originals in there and it kind of just grew from there really. Influences from an early age were The Beatles, Queen, and then later on Oasis, Blur and stuff like that came along. I think once we got older, that’s when the heavier stuff started with things like Rage Against the Machine. We were lucky that we were 15 or 16 that we had a great local scene. That really did shape the way we wrote music and the way we went about getting gigs and stuff like that. We had all kinds of music in our local scene with stuff like pop, funk, heavy metal, we just had so much right at our doorstep. Not to mention, we had London which was a 20 minute train ride away. Once we starting going to London we got more and more into dance music. So, yeah, like I said, we weren’t afraid to stop experimenting and putting it all in.

ME: I got to ask, you guys grew up together, and you all have become very successful. What was the one moment where you realized “we have made it”?
CB: Obviously is tough to pick one clinical moment. Even in the early days we would say this is worth seeing where this is going because we were growing. The best part for us was seeing people’s reactions. Some loved it, some hated it, and others were just interested. That was really encouraging for us in the early days. We had gotten to a point where we had been touring the UK about 3 or 4 years as a band and we played a festival called Download. It was just after we met our manager. It was at that point after playing all the small towns in the UK where we knew we had something. We played on the 3rd stage and about 6,000 people came to watch us at like 2:00 in the afternoon. I think that was the first time we saw all the hard work we had been doing had been paying off and that we were making it in the music industry.

ME: Now correct me if I’m wrong, but weren’t you guys one of the only unsigned bands to sell out a venue in London?
CB: Yeah that’s true! That was just after that festival we played that I was telling you about. We were doing a tour before the album came out. We put it on our website and we didn’t really expect people to show. This was the first show where we put tickets out in advance and we tried to step it up a bit. We were just blown away by the response. It was a small venue of about 800 people and we sold out with still a few weeks to go. We sat down and talked to each other and we thought “well, we could upgrade it to the bigger one, it would be half empty, but at least all the people that want to come can make it out”. We upgraded the venue and sold about 2,000 tickets. That was the London Astoria.

ME: In a festival, not everyone is there to see you. So, why should festival goers stop and see an Enter Shikari set?
CB: We’ve always believed that music should be passionate. The passion in your music should reflect upon your show. That’s something we thrive on. We put everything into our live show and performance. We can play to 100 people in a club with no production or in the UK we can bring a load of lights and put on a big production and play to a few thousand people. We always try to keep the connection between the audience and us the same. It comes down to raw passion.

ME: You guys take your career and business seriously, but you guys are very crazy and love to have a lot of fun. Who is the craziest in the group?
CB: We each have our moments. That’s for sure. Rou is actually very quiet and reserved off stage, but then you put him on stage and he loses his mind and goes crazy. That’s just the passion coming out again. Rob is quite possibly the craziest. Just in general day to day, the things I see him do, he’s just a funny guy. You’ll know from watching him on stage or seeing the moves he makes, you’ll know that he is quite a character.

ME: What’s the story behind the name Enter Shikari?
CB: Well, Shikari means “hunter” in a few different languages. We knew the name Shikari because Rou’s uncle had a boat named Shikari so once we looked into it and seen what it meant, we like the sound of it. We were going through a very atmospheric electronic and progressive stage. We like the mystery behind the name Shikari. We did a lot of research. We were very theatrical at this point. We wanted to refer to Shikari as a character. So, you can enter the character as if you have a script or a play. That’s the name behind our name Enter Shikari.

ME: If there is anything I left out, feel free to say a random thought or anything on your mind.
No, I think you covered the entire basis. We are just looking forward to getting out there at Stateside again. It’s been two years I believe. So, we are very excited to get out there.

Thanks so much Chris for sitting down with us. We know that Enter Shikari will put on a great US tour. Be sure to catch them out on tour this spring. 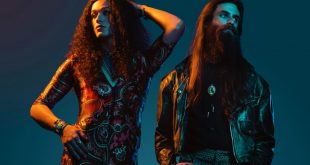