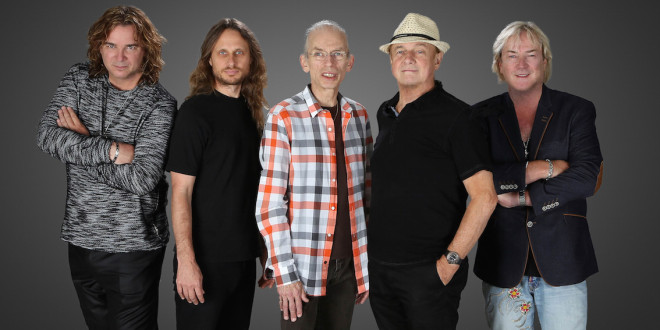 YES announced their 2016 summer touring plans. Billed as “The Album Series: Drama + Topographic 1 & 4,” the tour will feature the 1980 album DRAMA performed in its entirety, for the first time ever, and sides one and four of 1973’s double album TALES FROM TOPOGRAPHIC OCEANS, plus a selection of their greatest hits.

“We are proud to present the American public with forward-looking albums from the past,” says guitarist Steve Howe of the iconic and influential band. “Promoting ‘Drama’ at Madison Square Garden on multi-nights was a career milestone in 1980, and we are especially looking forward to performing both the opening and closing sides to ‘Topographic Oceans.'” Adds keyboardist Geoff Downes: “One minute, Trevor Horn and I were in The Buggles, the next we joined Yes, then we were in Madison Square Garden playing ‘Drama.'” Expresses drummer Alan White: “We really hit the ground running with ‘Topographic Oceans,’ my first recorded album with Yes. It pushed boundaries of music and went to number 1 in the UK.”

The band’s annual summer outing will take them throughout the U.S. from late Julythrough early September, beginning July 27 in Columbus, OH. YES will then stop in such cities as Atlantic City, Wallingford, Westbury, Staten Island, Morristown, Washington, DC, Pittsburgh, Detroit, Chicago, Milwaukee, Denver, Las Vegas, Santa Barbara, Los Angeles, Saratoga and Reno before wrapping September 4 inSan Diego. See below for initial list of tour dates. Go to www.yesworld.com for ticketing information and stay tuned to their website for additional shows that will be announced soon.

The 1980 album DRAMA–the band’s tenth studio album–marked a new sound and more aggressive direction for YES with the use of modern keyboards and a vocoder. The album peaked at #2 in the UK and #18 in the US and features the single “Into the Lens.” Released as a double album in December 1973, TALES FROM TOPOGRAPHIC OCEANS is a concept album comprised of four interlocking pieces, ranging between 18 and 22 minutes, and drummer Alan White’s first release with YES. As the band’s sixth studio album, TALES FROM TOPOGRAPHIC OCEANS reached #1 in the UK for two weeks–where it was the first UK album to qualify for Gold certification based on pre-orders–and peaked at #6 in the US.

Previous Great new video by Sarantos for “Dreamer.” The charity for this one is St Judes.
Next Mz Mali drops New World Order