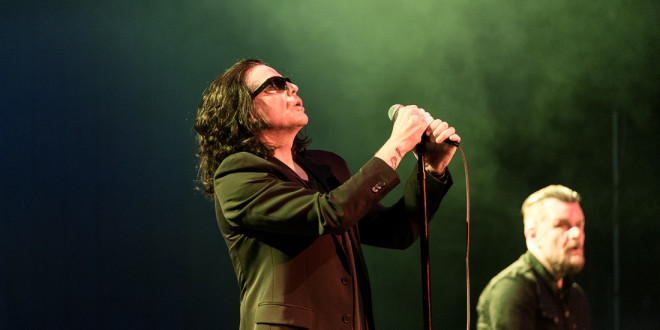 The keynotes of gothic rock fashion–the studded leather jackets and blots of black eyeliner–once tethered to a band spawned from the early 80’s post punk scene were largely absent, yet the full-capacity crowd packed into Montclair’s Wellmont Theater Saturday evening were just as devoted to The Cult’s rock n roll legacy as they had been in their youth.

With a legendary thirty-three-year career already behind them, The Cult is currently touring North America in support of 2016’s Hidden City. And while the record is an unmistakably strong addition to The Cult’s catalogue, the band’s live performance has allowed those songs to really shine. Hitting the stage with a remarkable lack of frills, The Cult was right down to business with 1987’s “Wild Flower.” It was a powerful kick-off that would set the pace for a 90-minute night of rock-turn-borderline-religious-experience with haunting track “Birds of Paradise” showcasing Ian Astbury’s trademark croon. Backed by Billy Duffy’s unmistakable classic sound on guitar, Astbury’s vocals sound off-the-charts remarkable live.

It was no surprise then, that thousands of devotees raised their fists in harmonious chants to beloved classics “Sweet Soul Sister,” “Fire Woman” and the iconic “She Sells Sanctuary.”

The end of a show is always a bittersweet moment, and this was no different. With the band in visibly good spirits, long goodbyes were said and a few crowd skirmishes were had over drummer John Tempesta’s drum sticks, which Astbury resolved by personally handing one lucky fan one of his tambourines.

The band’s next stop will be in Florida, where they will wrap up the Hidden City Tour with shows in Orlando on April 14th, St. Petersburg on April 15th and lastly Miami on April 16th.

Be sure to pick up The Cult’s latest offering, Hidden City, out now.

Check out some of our shots from the band’s set in Montclair, NJ: